Pick of the week: One Palestinian village resists 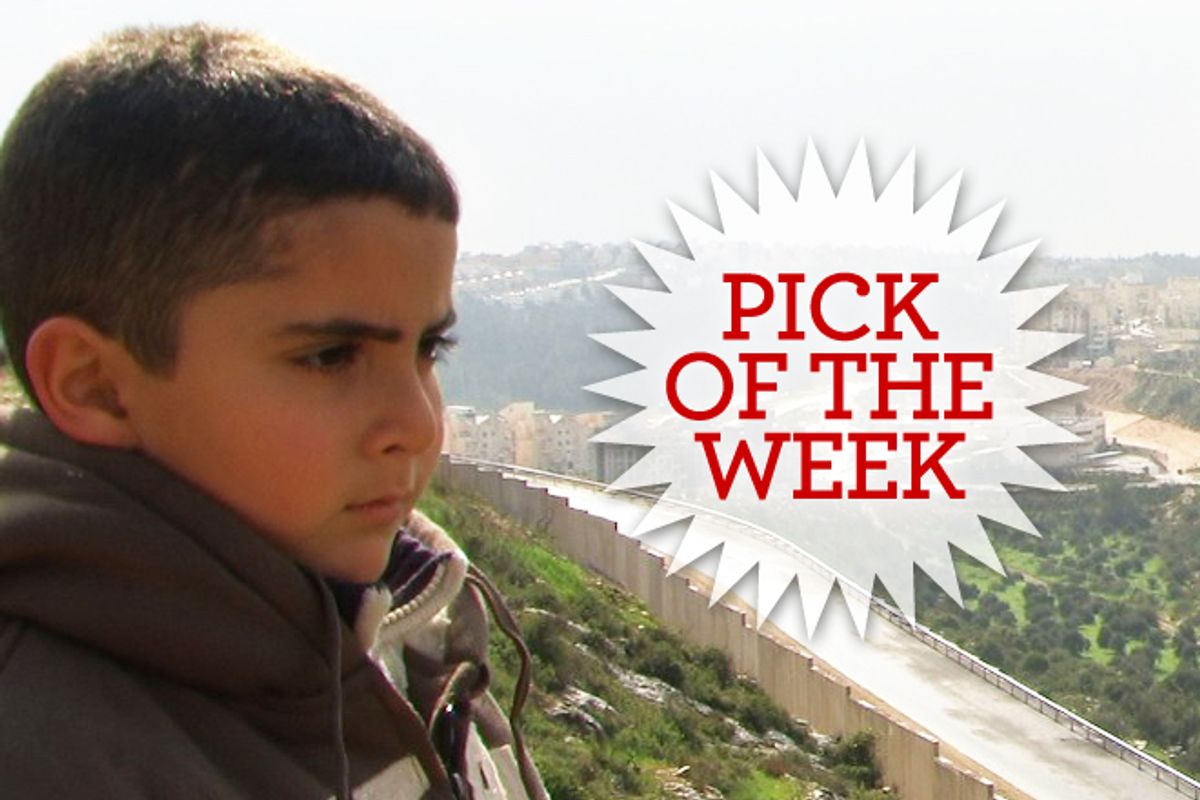 There have been several good documentaries (and a few good feature films) made about the Israeli-Palestinian conflict, that unhappy relationship between neighbors that has such wide ripple effects throughout the world. But even the best of those movies -- like, say, Israeli radical filmmaker Simone Bitton's "Wall" -- face ideological and epistemological dilemmas with no easy solution. How do you deal with the fact that many people will come to this subject with their minds already made up, eager to use the film to support existing points of view? And how do you avoid the twin poles of documentary film -- anthropological detachment, on one hand, and pure agitprop on the other?

I'm not saying that "5 Broken Cameras," the result of an extraordinary collaboration between Palestinian videographer and activist Emad Burnat and Israeli filmmaker Guy Davidi, completely overcomes these obstacles. But in telling the story of both Burnat's family life and the campaign of nonviolent civil disobedience waged in one Palestinian village, it plunges you right into the middle of the conflict on a personal and intimate scale. Edited from 700-plus hours of eyewitness video shot by Burnat (and a few others) between 2005 and 2010, "5 Broken Cameras" is a hair-raising and heartbreaking film of a distinctive 21st century variety. It's set almost entirely in and around Bil'in, a village that sits just inside the Occupied Territories, adjacent to the infamous West Bank Wall, and follows its residents as they mount a David-vs.-Goliath resistance movement against the de facto annexation of most of their agricultural land.

We see unarmed demonstrators dispersed by Israeli troops, sometimes with gas grenades and sometimes with live ammunition. We see numerous Palestinian, Israeli and international activists injured, and we watch one of Burnat's protagonists -- an endlessly optimistic Bil'in native known incongruously as Phil who always clung to a vision of a peaceful two-state solution -- as he is shockingly and suddenly killed, up close and in living color. We see the immediate aftermath of a dreadful auto accident in which Burnat himself crashed into the West Bank Wall and nearly died. He spends three weeks in a coma, after Israeli troops agree to send him to a state-of-the-art Tel Aviv hospital. (As he wryly admits, if he'd gone to a Palestinian hospital, he probably would not have survived.) We watch family videos of Burnat's youngest son, Gibreel, as he grows from a baby to a toddler to a boy; his first words are "wall" and "cartridge." And we witness the final moments shot by each of Burnat's five broken video cameras, each one a casualty of some altercation with Israeli troops or settlers. (One of them stopped a bullet, most likely saving his life.)

Certainly "5 Broken Cameras" is not ideologically neutral, and it never claims to be. But it's tightly focused on this particular campaign of nonviolent resistance in two particular villages -- campaigns against illegal land seizures that were eventually reversed by the Israeli courts -- and not at all on big, intractable questions about religion and nationality and terrorism. No doubt the most avid supporters of Benjamin Netanyahu's government, or the continued expansion of Jewish settlement into the Palestinian territories, won't find much comfort here. The settlers are shown as thuggish opportunists who exploit loopholes and weaknesses in their own country's laws, and Israeli troops display a tendency to respond to even the mildest protests by Bil'in villagers with overwhelming shows of force and widespread campaigns of intimidation.

But a thoughtful viewer will recognize right away that the film's very existence -- officially, it's an Israeli, Palestinian, French and Dutch co-production -- like Burnat's lifesaving trip to Tel Aviv, offers compelling evidence of the openness and democracy that Israel's defenders often cite. It's impossible to imagine the Assad regime in Syria, the Saudi royal family or any other elite Arab government tolerating the existence of a film made by dissidents that showed its own troops beating and shooting unarmed protesters. Unlike those countries, Israel possesses a genuine civil society (however imperfect), and introspection and self-criticism are written deeply into the national character.

As I mentioned above, the Bil'in activists eventually score a partial and modest victory when the Israeli courts order the wall to be repositioned a few hundred meters from the village and return some of the seized land to its owners. None of that makes up for the fact that Burnat's friend Phil was needlessly killed, or that many of Bil'in's olive groves were bulldozed to make way for the densely packed apartment buildings of an Israeli settlement, to be sure. But "5 Broken Cameras" captures the unique nuances of the Israeli-Palestinian relationship in a way few films have and makes clear that the situation does not resolve, from anyone's point of view, to some simple equation of good and evil.

The direct action campaign in Bil'in and next-door Nil'in drew in many Israeli and international leftists and put the Israeli government visibly on the defensive, at least as regards its covert policy of territorial expansion. (Forces of repression are always more comfortable dealing with terrorism and violent resistance,and often freak out when faced with widespread civil disobedience. Just ask Gandhi or Martin Luther King.) Optimism is almost always misplaced when it comes to the Middle East, but the mere fact that an Israeli and a Palestinian made this film together suggests that new possibilities are emerging. So does the heart-rending final scene, when Burnat, now permanently disabled, takes his sons to an Israeli beach and dares to imagine that Gibreel will grow up to see a different world. Camera No. 6 has already survived a direct hit by a gas grenade, and is still working.

"5 Broken Cameras" is now playing at Film Forum in New York, and plays June 1-3 only at the Michigan Theater in Ann Arbor, Mich. It opens June 22 in Boston, San Francisco, San Jose, Calif., and Santa Fe, N.M.; June 29 in New Orleans; July 13 in Washington; and July 16 in Albuquerque, N.M.;with more cities to follow.