Why can't the Democratic Party come up with a consensus position on the Middle East's most brutal conflict? 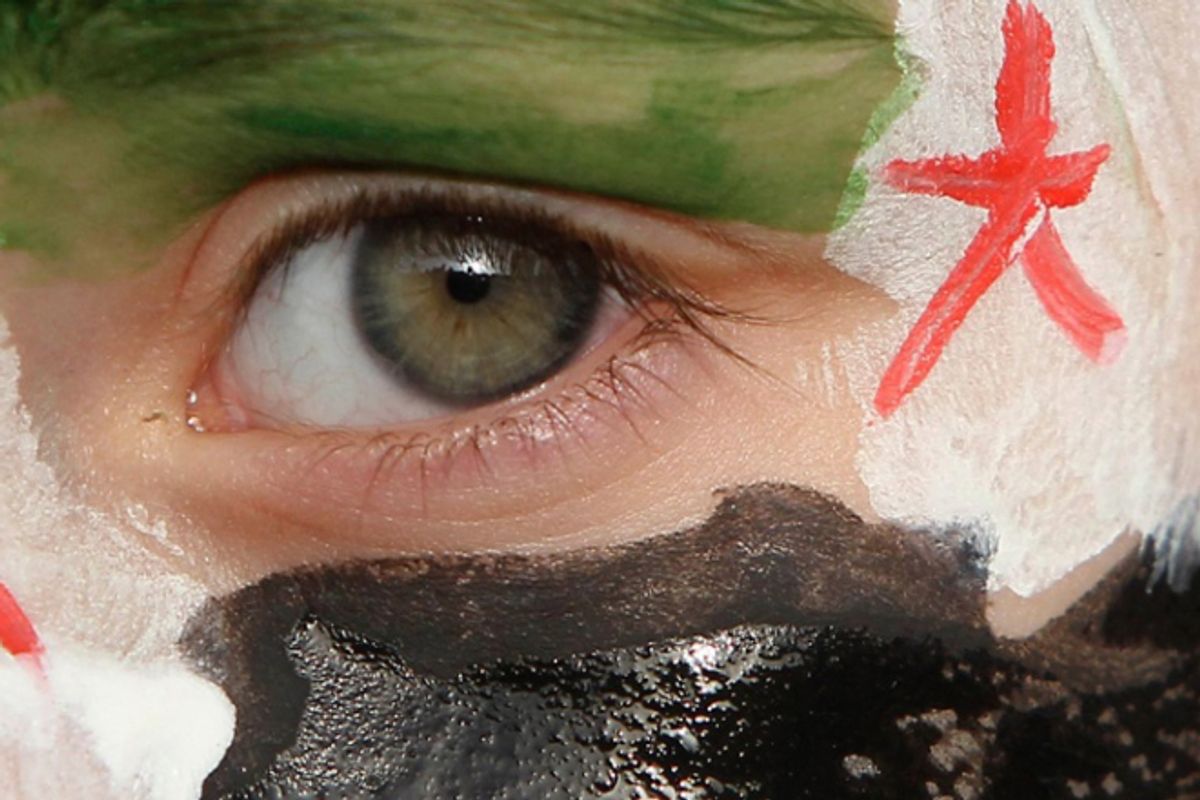 A boy with his face painted in the colours of the Syrian opposition flag takes part in a demonstration against Syria's President Bashar al-Assad. (Reuters/Ali Jarekji)
--

When it comes to the presidential campaign, the world beyond America’s borders has been largely forgotten as the debate has focused on issues closer to home. But where foreign policy has come up, no issue has been more salient in recent days than what to do about Syria, where the Assad regime has launched an increasingly brutal crackdown on the year-and-a-half-old opposition movement.

The Obama administration has stuck to its deliberate approach, hoping for progress in the diplomatic process currently being led by former UN Secretary General Kofi Annan. Mitt Romney, unsurprisingly, has called for a more muscular intervention in an attempt to paint the president as soft. Meanwhile, the usual hawkish trio of senators -- John McCain, Lindsey Graham and Joe Lieberman -- have gone even farther, calling for airstrikes almost a month ago.

Progressives, however, have struggled to come up with a position. Michael Hanna, a fellow at the left-of-center Century Foundation, says they have “mostly not [been] speaking out.”

“We are of two minds, as a group, about this,” Rep. Keith Ellison, D-Min., the co-chairman of the House Progressive Caucus, told Salon. “One is human rights: When I went and got arrested in front of the Sudanese Embassy [protesting the genocide in Darfur] a few years ago ... it was progressives who were standing there next to me getting arrested, too.”

“On the other hand, we have seen -- you know, start with Vietnam, other military conflicts leading up to Iraq. And now our endless time in Afghanistan,” he said. “Our military engagement in the past has been sullied by questions like this, to the point where many progressives just don’t even believe it if the U.S. government says we’re there for humanitarian reasons,” he added.

Ellison wrote an op-ed in the Minneapolis Star-Tribune calling for safe zones to be created on the borders of Syria where civilians could flee -- a somewhat surprising position for the chairman of what is perhaps Congress’s most anti-war group of lawmakers. “I’m not coming at this from an ideological perspective; in many cases it’s personal,” Ellison says of his position on Syria, noting that many of his constituents of are of Syrian descent. As the first Muslim elected to Congress, Ellison said people of Middle Eastern descent from across the country have urged him to support the Arab Spring and the democracy movements across the region.

Senator John Kerry, D-Mass., has been willing to go even a bit farther, saying the international community should consider safe zones inside Syria.

Still, Heather Hurlburt, the executive director of the National Security Network, who also served in the White House and State Department under President Clinton, said she doesn’t expect to see a Democratic consensus around safe havens because the risks are too high.

“Anybody who’s proposing military options without being serious that [they] could lead to a full-on shooting war isn’t being as serious as they claim they are. And that’s why you’re not going to see a groundswell of support for the safe havens,” she told Salon. What if the Syrian military comes into the safe zones guarded by foreign troops? (They’ve already fired across the border into Turkey.) What if Syrian rebels use them as a base of operations? Either scenario could lead to a shooting war, Hurlburt said: “You have to mean it.”

“No surprise that [you] can’t specify a single Dem/progressive position: For better or worse, this is the nature of this political beast,” Al Gore's former foreign policy adviser Bruce Jentleson said in an email. “Dems/progressives do see Syria as important, and for reasons both of interests and values,” said Jentleson, now a professor at Duke. But the question is “not if, but how.” The debate is finding the “optimal balance between force and diplomacy.”

Hanna noted the debate is hampered by a “bunch of lousy, awful options in Syria.” Laying out the difficulty of the political, military, geographical and international situations in the country, Hannah told Salon that intervening in Syria would be nothing like intervening in Libya. “To be frank, it’s something that might not have solutions.” Larry Korb, a senior fellow at the Center for American Progress, who worked in the Reagan Pentagon, pointed to Somalia and Lebanon, where Western forces intervened in 1982 but had to pull out “because we were doing more harm than good.” He adds, “We got lucky in Libya.”

Toward the end of our conversation, Ellison added: “The reason I offer my views with some trepidation is -- I don’t mind fighting with the right wing. I do it when I get up in the morning, and I do it when I go to bed. But it’s harder to take on your own side.”

Every expert noted that the question is really “not a left-right thing,” as Korb said, but more of a question of how to find the best solution. Romney’s blatant politicization of the issue is little more than bluster, they agreed.

“It’s the focused-grouped response to atrocities: Feel good that you’re doing something” while offering little, Hurlburt said. “This makes the public more cynical, which makes it less likely to want to intervene.”

Hurlburt recalled favorably the political discourse of the Clinton-era interventions, when Republicans and Democrats had real debates about policy instead of trying to take pot shots at each other.

“As a raving progressive, I never thought I’d say I miss the days of Bob Dole,” she said.