A dangerous time for context 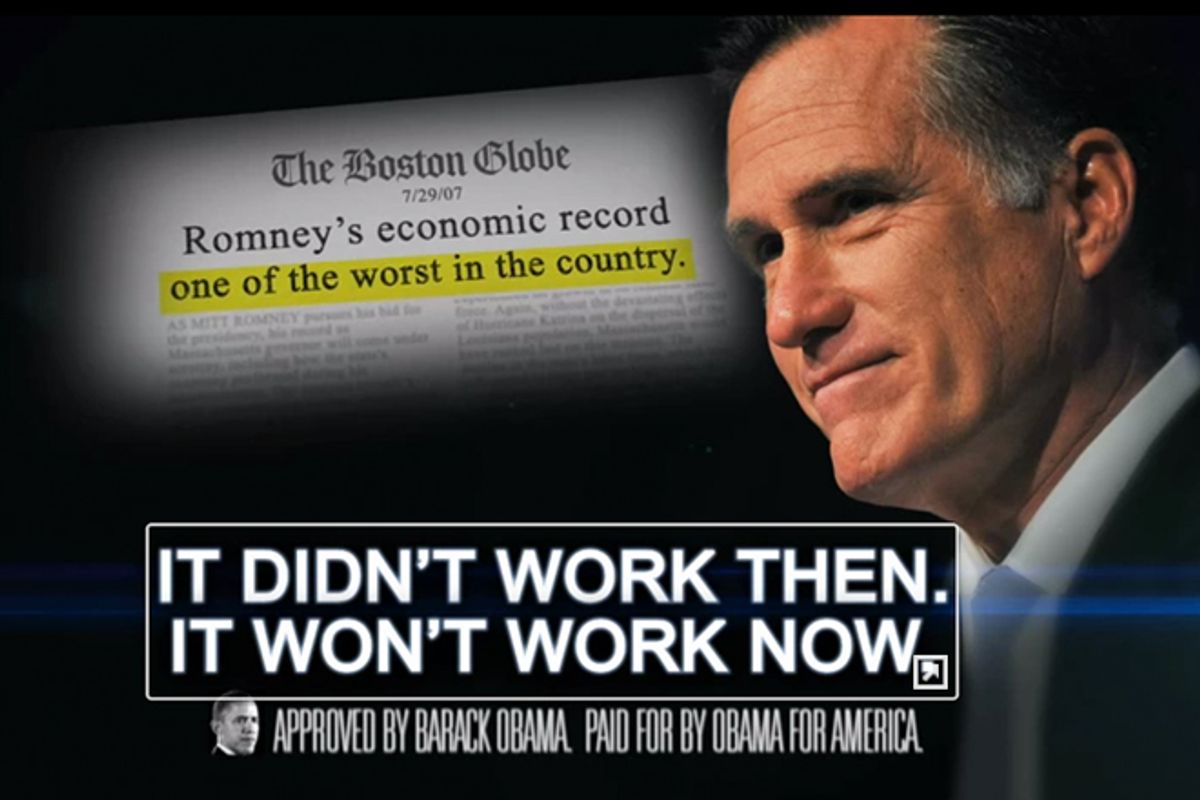 The Obama campaign is continuing its assault on Mitt Romney’s Massachusetts record with a new ad that shows him making the same basic promise to Bay State voters in 2002 that he’s making to all Americans today: “I speak the language of business. I know how jobs are created.”

As the one-minute spot makes clear, Massachusetts on Romney’s watch was not exactly a jobs-creating superpower, ranking 47th in new job growth. His heavy reliance on regressive fee hikes to bring the budget into balance and statistics about the erosion of the state’s manufacturing base and outsourced state jobs are also hyped. The idea, obviously, is to force swing voters to view Romney as something other than a generic, suitably qualified alternative to Obama.

For Obama, this task is more urgent than ever in the wake of last Friday’s miserable jobs report. It is also, not coincidentally, getting more difficult to pull off.

Obama’s reelection prospects essentially depend on introducing context into the presidential race and getting swing voters to appreciate it. Romney, meanwhile, is relying on a much simpler formula – the tendency of these same voters to turn on the incumbent president when their economic anxiety is high. In the short term, the latest jobs report, which showed anemic job growth and an uptick in the unemployment rate to 8.2 percent, figures to ratchet up the public’s pessimism slightly. More alarmingly for Obama, it suggests the modest recovery of the winter may really have stalled out and that similarly depressing jobs reports could be the rule in the months ahead.

It’s impossible to quantify, but a relationship probably exists between the level of an average swing voter’s economic anxiety and his or her willingness to consider the context Obama is trying to introduce. This new ad, in other words, will probably find a more skeptical audience now than it would have a few months ago, when the news was filled with reports of decent and encouraging (though hardly overwhelming) employment gains.

At the same time, a climate of economic panic is also conducive to Romney’s own efforts to introduce context, in those rare instances when he wants to. This is one of those instances, with the Romney team pointing out the difficult circumstances he inherited – a sluggish economy, a big deficit -- when he became governor in 2003. There’s something to their defense; Romney’s actual gubernatorial record wasn’t as spectacularly awful as Democrats say, although it wasn’t much to write home about either.

But the question here is how swing voters will interpret an argument like this. The less hope they have about where the economy is heading now, the more they’ll be tempted by Romney’s suggestion that everyone will feel a lot better if we just hit the reset button and put someone new in the White House. If that’s the mood swing voters are in, then they’ll be looking for excuses to ignore all of the red flags the Obama campaign is raising about Massachusetts, and Romney won’t have much problem winning the argument over his gubernatorial years.