Season 2 ends with many thrilling moments, but 10 episodes at a time might not do this fantasy epic justice 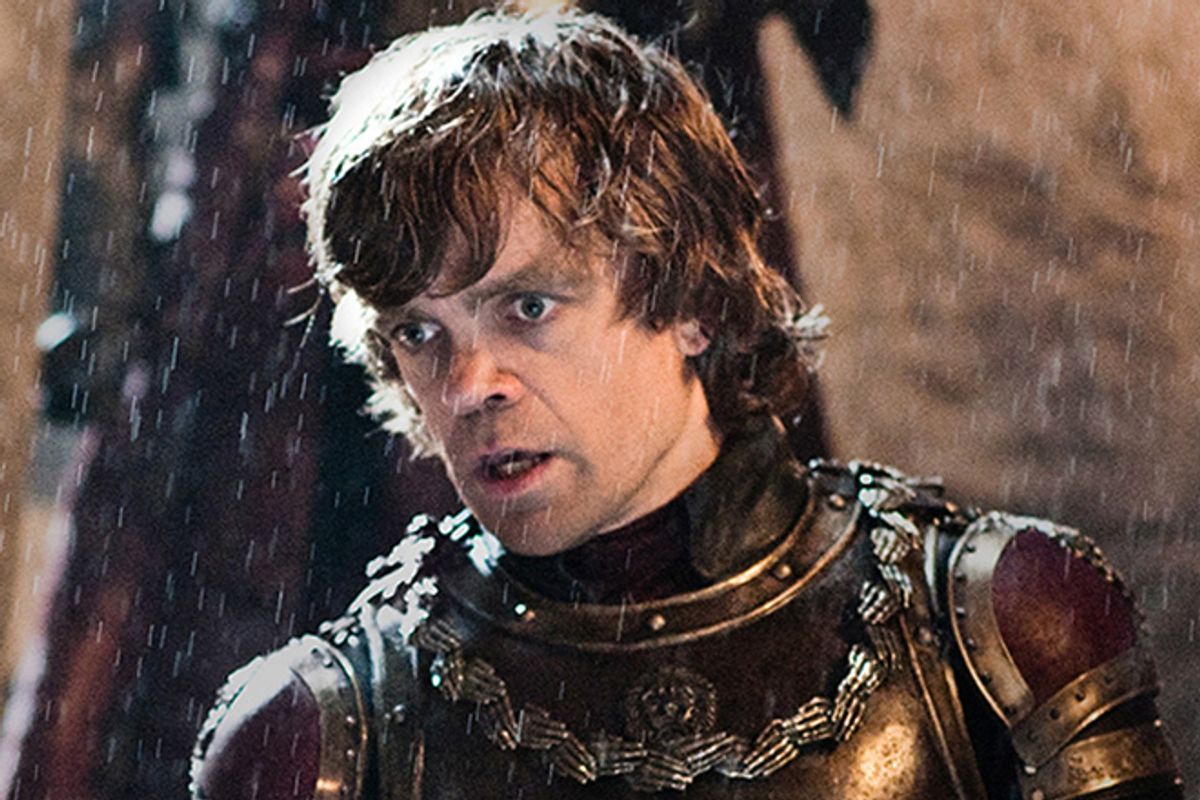 Peter Dinklage in "Game of Thrones"
--

The second season of “Game of Thrones” ended with a wizened, shirtless zombie, sporting a pair of eyes that redefine “icy blue,” atop a horse with only half a face, pointing his sword and compelling his massive horde of lurching followers through the snow with the strength of his eerie screech. This white walker did not cut quite the daunting, impressive figure he was meant to, in part because those eyes reminded me of some special effects I’ve seen in “The Mummy,” and in part because “Game of Thrones” has already become dangerously overstuffed with characters I would like to see more of -- and a guy whose facial skin looks drier than beef jerky that’s been curing for centuries is not one of them.

As with last year, when Ned Stark lost his head in the season’s second-to-last episode, it was really the penultimate episode of this season that was the climax. Last week’s battle for King’s Landing made for a relatively taut, focused, economical hour of television (with its own, lime-green version of cut-rate special effects), and it did so by ignoring more than half of its characters. Jon above the wall, Arya with the lions, Rob with his war and his soon-to-be-wife, Bran and Rickon hiding out under Theon Greyjoy’s nose, and Daenerys and her hunt for her dragons were all ignored, while a dozen or so other major characters settled their season-long business around the Iron Throne. Even with half the cast on hold, there was still too much going on for the series to adequately explain that the man who slashed Tyrion's face mid-battle did so at Cersei’s behest, a piece of information that was only meted out last night.

If "Game of Thrones'" characters were not so perverse and compelling, if they were not portrayed by such excellent actors (Kit Harrington and his tortured facial expressions excepted), the super-size cast might be a good thing — we would never be with any character long enough to get bored. But I’m not bored. In fact, I would be down to watch an additional television show exclusively about Arya, or a reality TV spinoff set among the wildings. Instead, I'm supposed to be sated with last night’s finale, which felt like the 70-minute version of the same cinematic end sequence, where title cards tell you everyone's fate. "Daenerys rescued her dragons and bought a boat," "Robb got married and probably signed his own death warrant," "Stannis fell back under the influence of the red-headed sorceress after looking into a fire." Everyone got a sequence -- Tyrion and Daenerys even got two -- and they're all set up nicely for next season. But the constrictions of the TV form (10 one-hour episodes per season) is starting to rub up against the lack of constriction in George R.R. Martin’s novels (as many pages as he wants).

The episode contained many wonderful moments, small (the way Joffrey’s devilish head was framed against what looked like a blood red pentagram; Sansa’s smile at learning she won’t have to marry Joffrey; Shae and Tyrion’s honest discussion of his new scar); and not so small (Theon’s bombastic speech and brutal undercutting; Jaime and Brienne’s bloody woodland adventure; Daenerys and her dragon fire). But it added up to something that was less than the sum of those moments. The intellectual satisfactions of “Game of Thrones” — the to-scale, ungainly, sordid, bloody telling of how history gets made, and all the hundreds of actors that have to make it — are starting to diverge from the televisual ones.

To be fair to “Game of Thrones,” its finale was in some ways a victim to the Sunday night television extravaganza, wherein seemingly every show you might care about airs in a three-hour period. “Game of Thrones” may have been ending until next summer, but in terms of enervating, epic television events, it would be hard to top last night’s “Mad Men,” which upped the ante on last week’s formula of juxtaposing the loveliest moments with the most devastating. [Spoiler alert on "Mad Men" to follow!]

The last 10 minutes of the episode contained two of the most heart-melting moments I’ve ever seen on “Mad Men”: Betty and Sally’s embrace, and Don letting Glen drive himself back to Hotchkiss, as a way of proving life doesn't always have to be crappy. They bracketed one of the saddest: Lane Pryce’s office suicide. (Were the many season-spanning hints that Pete was the one who would die intentional red herrings?) At the beginning of the episode, Don, hip to Lane’s embezzlement, insisted he resign. Lane, reduced to tears, drank, made unpleasant comments to Joan, went home and vomited at the sight of the brand-new Jaguar his wife had kindly, but unfortunately, just purchased for him. Then he drank some more, and failed to kill himself in that same Jag. (It wouldn't start. Unreliable to the end.) The shot of Lane trying to fix the engine using half a pair of eyeglasses — he had snapped them moments before in preparation for his death — was perfect in its patheticness. Undone by the car, Lane then went to the office and hung himself, where he was discovered on Monday morning, already starting to stink.

This being this season of “Mad Men,” where more is always more, we were shown Lane’s dead body as Don, Roger and Pete cut it down from his office door. Don caught the weight of Lane, and laid him down on the couch to wait for the coroner. In the scene right before, in what may be Betty Draper’s kindest and most sympathetic sequence, Betty got in bed to curl up around Sally, who had just gotten her period, and, did, in that moment, really just need her mother. The sweetest touch followed by the saddest: I’m not sure which made me tear up more.