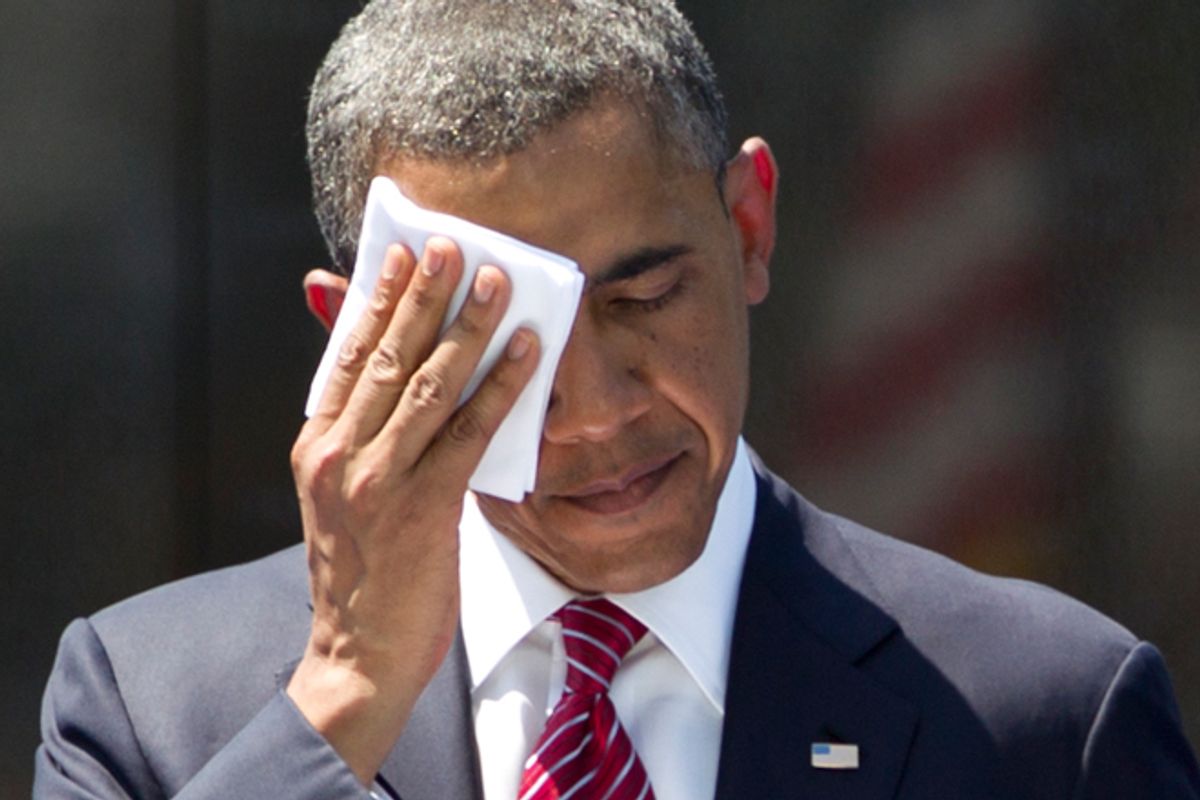 June opened with a disappointment and could close with a downright disaster for the White House and the Obama campaign, making the month an easy pick for worst of the campaign so far -- and we’re only four days in.

On Friday, the first day of the month, came the government’s latest jobs report, which showed the country created only 69,000 new jobs in May, and was widely regarded as dismal for the country and just as bad for Obama’s reelection hopes. “If you’re handicapping the election, the chances of a President Romney getting inaugurated next January just took a big leap up,” Salon’s Andrew Leonard wrote.

Tomorrow, if most polls, the pundits and Nate Silver are to be believed, Democrats are poised for a heartbreaking loss in Wisconsin, where progressive and labor activists have worked for two years to fight Gov. Scott Walker, only to potentially see things back where they started.  Except now, if he wins, Walker will be more powerful than ever on the national stage, having survived the full brunt of the left and being canonized for it on the right as Walker the Union Slayer.

Fast-forward to next week and another Tuesday could bring another loss in an emotionally charged race that has drawn national attention. In this case, a special election for former Arizona Democrat Gabby Giffords’ House seat. Polls have been spotty, but don’t look good for Dems, and neither does the political landscape in the district: Its partisan voting rank is +4 Republican and John McCain won it by 6 points in 2008. But Giffords’ tragic shooting and her miraculous recovery have captivated the nation and both parties’ national organs, who put the district high on their target list and invested accordingly.

Exacerbating the potential loss for Dems is that Giffords’ former staffer Ron Barber, who was injured in the shooting spree at the congresswoman’s town hall meeting, is the candidate. And the Republican, Jesse Kelly, is a hard-right Tea Partyer who has called for privatizing entitlement programs (though he’s since walked that back) and hosted an infamous fundraiser with machine guns to “remove Gabrielle Giffords from office” (before the shooting).

At the end of the month will come the Supreme Court’s decision on the Affordable Care Act. While it’s impossible to know how the court will rule, the most court watchers were not pollyannaish. "I think this law is in grave, grave trouble,” the New Yorker’s Jeff Toobin famously declared after the oral arguments let out. While some pundits have argued counterintuitively that the court striking down the law could actually help Obama politically, the blow to the president’s policy agenda would hardly be worth it.

Add to all that the seasonal increase in gas prices that typically begins around now (experts predict that while prices will be a bit lower than last summer, they’ll be 75 cents a gallon higher than summer 2010), a deteriorating situation in Syria, and ongoing political and economic woes in Europe, and it’s easy to conclude there’s not much to look forward to in coming weeks.

But Democratic strategist Bob Shrum, who offered what he calls “not a pessimistic, but a realistic” account of Obama’s prospects on CBS’s "Face the Nation" Sunday, says we shouldn’t worry too much about June when it comes to November.

“Every campaign goes through this,” Shrum, who advised John Kerry’s presidential campaign and is not on the Obama campaign, told Salon. “George Bush had periods when he was behind Kerry. He was pretty much well behind [Al] Gore from the end of the conventions to the first debate. … Ronald Reagan had it. He had a terrible beginning to his 1980 general election campaign.”

Shrum said he remains confident that Obama will win, despite hand wringing and off-message moments from “the Acela corridor” about the Obama campaign’s attacks against Romney’s record at Bain Capital.

“The Republicans are just more disciplined than we are,” he explained. “We have a peanut gallery that immediately rises up to say, oh, the sky is falling.”