The number that Scott Brown is really up against 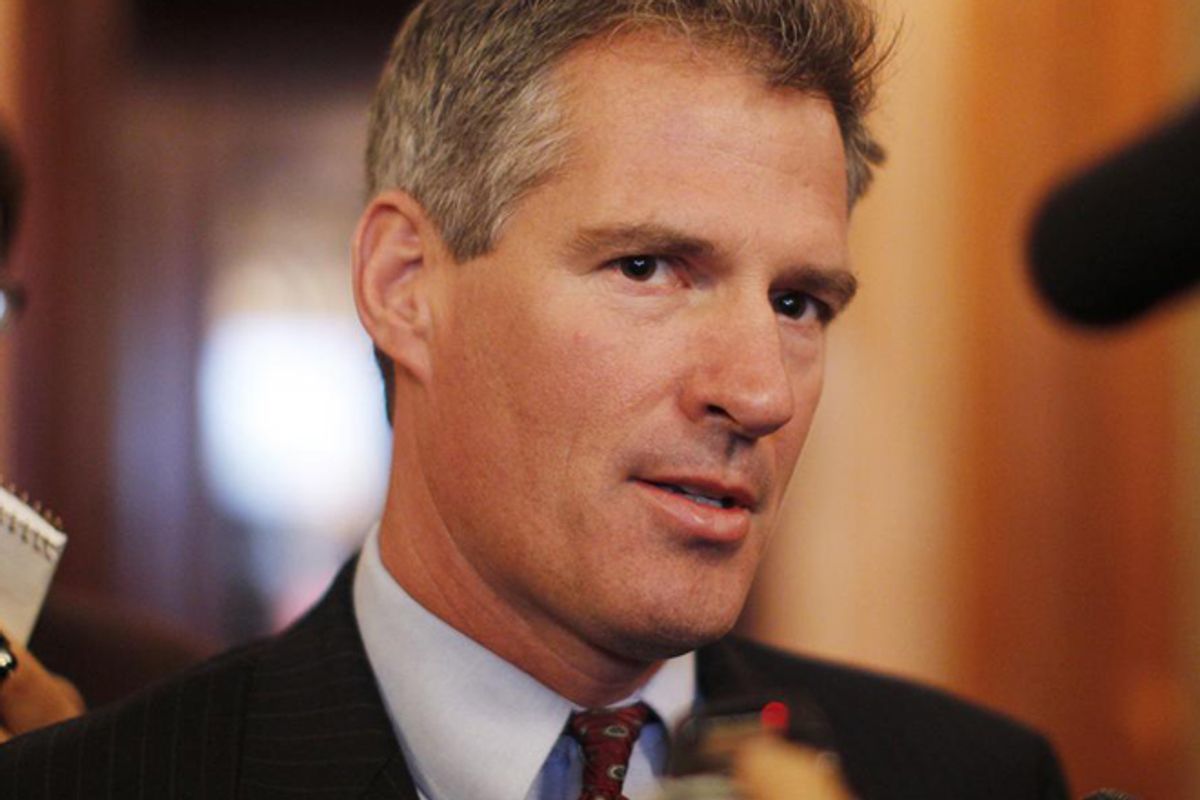 It was an encouraging weekend for Elizabeth Warren, who snuffed out a would-be primary foe at the Massachusetts Democratic convention and received further polling confirmation that coverage of her Native American ancestry isn’t affecting her standing against Republican Scott Brown.

Warren’s success at energizing her party’s base and activating a national grass-roots donor network helps explain why the race remains a dead heat. But the biggest single factor has to be the “R” that comes after Brown’s name.

If this were strictly a popularity contest, Brown would win with ease. One recent poll gave him a favorable score 15 points higher than Warren’s, while a Boston Globe/UNH survey released over the weekend pegged his job approval rating at 60 percent. But party label matters in Massachusetts, a state that President Obama will carry with ease this fall, leading a significant number of voters who genuinely like Brown to say they’ll vote against him anyway.

The challenge Brown faces isn’t insurmountable, but the track record of recent incumbent senators who’ve been in his position is very mixed.

In the past four presidential election years, 31 senators sought reelection in states that voted for the opposite party’s White House candidate, and 22 of them defied the top-of-the-ticket tide and won anyway. But this is a misleading statistic. In many of these instances, the other party didn’t seriously contest the race, fielding token, underfunded candidates (or no candidate at all) and essentially conceding the election. For example, Republicans didn’t even bother to run anyone against Arkansas’ Mark Pryor in 2008, allowing him to rack up a 60-point victory over a Green Party candidate even as Obama lost the state to John McCain by 20 points.

If you weed out situations like this and look only at incumbents who faced serious, well-funded challenges, the number of senators who’ve been in Brown’s shoes over the past four presidential cycles drops to 17 – with only eight of them winning reelection. A good number to look at in these past races is the difference between the statewide margin at the presidential level and in the Senate race – basically, how much of a swing was each incumbent able to bring about?

Here the numbers vary wildly, from the impressive 46-point swing that Rhode Island's Lincoln Chafee produced in 2000 to a few instances where Senate incumbents actually performed worse than their party’s presidential nominee. The full list follows. (To be clear, this isn't meant to be a precise, scientific exercise. Among other things, the presence of third-party candidates skewed the results in some of these races, and I’m not trying to account for that. The idea is just to illustrate the basic challenge that Brown faces.)

The average swing produced by these incumbents was 12.4 percentage points. To survive in November, Brown will need to do better than this. Polls in Massachusetts have generally shown Obama ahead by between 20 and 25 points, which is consistent with how the state has voted in recent presidential elections. (Obama won it by 26 in ‘08, John Kerry by 25 in ‘04, Al Gore by 27 in ‘00, and Bill Clinton by 33 in ‘96.) Even though it’s technically his home state, Mitt Romney has no plans to contest Massachusetts this fall, and the state’s voters have little residual affection for their former governor. A fair guess is that Obama will carry it by 22 points.

The bad news for Brown is that only three of the senators listed above managed to engineer a swing big enough to make up for that kind of top-of-the ticket deficit – Chafee in '0 and Collins and Landrieu in ’08. The good news is that he’s much more popular in his state than many of the above-listed incumbents were. And there’s also the story of Massachusetts’ 1996 Senate race, when then-Gov. Bill Weld – who was at least as well-liked as Brown now is – shaved 26 points off Clinton’s margin in his Senate race against Kerry. That swing still wasn’t enough to push Weld over the top, but it might do the trick for Brown this time around.