The woman who could spoil Wisconsin

Updated: She is the nation's most notorious election clerk -- and Dems worry that she's out to help Scott Walker 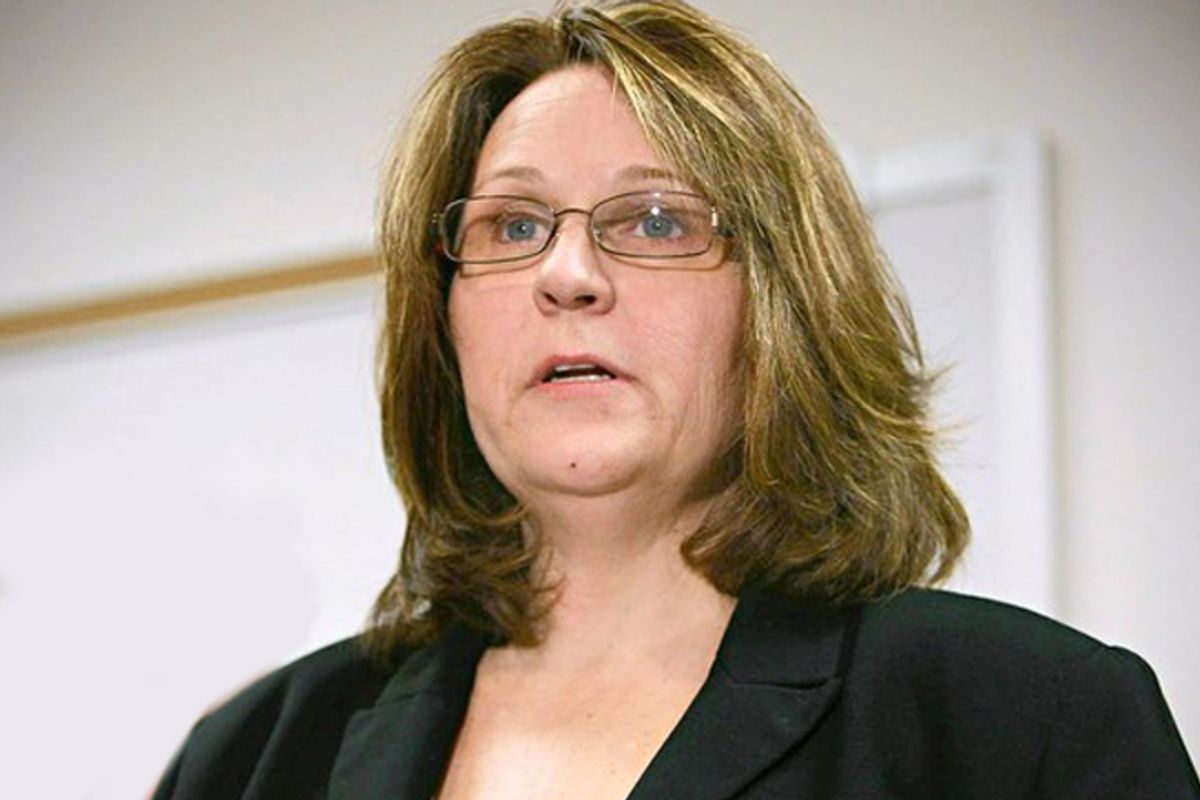 For months, progressives have raised the alarm over what role Kathy Nickolaus, the nation’s most notorious county election clerk, would play in counting tonight’s Wisconsin recall results. Their fears were echoed by the pro-Walker editorial board of the Milwaukee Journal-Sentinel,  which wrote in April that Waukesha County’s voting snafus on her watch had “damaged her office’s credibility beyond repair.”

In a closely watched judicial election in April 2011 – seen as a referendum on Scott Walker’s agenda – a seeming Democratic victory evaporated when Nickolaus announced she’d found 14,000 misplaced ballots from her deep-red county two days after the election. In April’s GOP presidential primary, issues with Waukesha County’s election computer system led to more delayed results, as paper voting slips were gathered from across the county and put up on the walls of an office to be counted.

This morning, the county executive office’s chief of staff told the Washington Post’s Greg Sargent that Nicklaus “will not be involved in the vote counting this evening,” but that she could be in the office anyway. Some say that’s not good enough.

As Sargent notes, “similar assurances were given a month ago” for the recall primaries. But a TV news station caught Nickolaus present in the office, and appearing “to be very much in charge of the count.”  An anonymous observer told Mother Jones’ Andy Kroll that Nickolaus “was there, and she made it seem as if she was in control.” Republican Waukesha County Executive Dan Vrakas told the Waukesha Freeman that vote counts were being handled by a deputy clerk, and that “I’d prefer that she wasn’t here on election night but I can’t ban her from the building anymore than I can ban anyone else from the building.” Nickolaus and Vrakas did not return requests for comment this morning.

Reached over email, We Are Wisconsin spokesperson Kelly Steele said, “Despite the dog-and-pony show in Waukesha County suggesting she’s stepped aside, all evidence – except her own word – points to her remaining firmly in control of the most controversial jurisdiction in Wisconsin, which just happens to be the heart and soul of Scott Walker’s base.”

A group of Waukesha voters has written to Vrakas, calling on him to secure a restraining order keeping Nickolaus from counting ballots. “If you cannot get a restraining order in time,” they wrote, “then we ask that you assign a trained and qualified observer to stand at Nickolaus’ side between now and when the ballot count is certified to ensure that she is not corrupting the vote.” They note that Wisconsin’s Republican attorney general, J.B. Hollen, announced plans to dispatch agents to polling places around the state to oversee election compliance – a move critics have charged is targeted at Democratic voters in areas like Milwaukee. A source familiar with the group’s efforts told me that they’ve received no on-the-record response from Vrakas, and that further actions are expected today.

They’re not the only ones concerned about Nickolaus.  This morning, Waukesha resident Barry Karow expressed alarm when he arrived to vote at the American Legion Hall in Okauchee and found out that a machine was malfunctioning.  At this polling place, ballots are marked by hand and then entered into a machine that scans them, counts their votes, and stores them. Because the machine wasn’t working, votes were being stored in a box instead; the police chief was there to oversee the process. Karow told me he worried that this meant his ballot would end up in a manual count overseen by Nickolaus: “It raised my concern about whether or not votes were going to be accurately counted.”

When I visited the Okauchee polling site this morning, the head election volunteer on-site confirmed that the vote-counting machine stopped working after a ballot got jammed in it. She said the problem had been resolved: For the 90 minutes until the machine could be fixed, ballots were stored in a lockbox; after it was fixed, all of those ballots were entered into the machine under the watchful eye of the local police chief.

UPDATE: It depends on the meaning of the word “involved.”

As I noted this afternoon, Shawn Lundie, the chief of staff to Waukesha County Executive Dan Vrakas, told Greg Sargent that notorious County Election Clerk Kathy Nickolaus “will not be involved in the vote counting this evening.” But Vrakas also told Laurel Walker of the Milwaukee Journal Sentinel that deputy clerk Kelly Yaeger, who is overseeing the election instead of Nickolaus, can ask her boss for help.

I just got a call from Lundie (responding to my inquiry from this morning), and I asked him what he’d meant when he said Nickolaus wouldn’t be involved tonight. His answer may not satisfy Nickolaus’ critics.

Asked whether that meant Nickolaus could still be counting votes, Lundie said Yeager “will not be asking her to count ballots … she will not be counting ballots, tabulating votes, anything like that.” Lundie confirmed that in normal situations, Yeager reports to Nickolaus. In other words, Yeager is tasked with determining the responsibilities of the person who’s normally her boss.

When I asked Lundie if Vrakas has confidence in Nickolaus to execute whatever responsibilities she’s given with competence and integrity, he said, “I don’t think anyone’s ever really questioned, and we haven’t questioned, the integrity of our election results. What we’re concerned about is the timeliness of the release of those results. The integrity of the results as far as we’re concerned in not in question.” Lundie said voters should be reassured that Nickolaus will be on the sidelines, “just as she was on May 8.”

Not all Waukesha voters agree. Keith Jamieson, one of the signatories on the letter delivered to Vrakas requesting that he seek a restraining order, told me Nickolaus “personally needs to take a step back, and obviously she doesn’t want to do that.” Jamieson noted reports that Nickolaus “was heavily involved” on May 8 despite promises to the contrary. “That’s why we have gotten to this point.”

Asked about the call for a restraining order, Lundie said his office lacks the power to directly issue one, and said that Nickolaus “has every right to be in the building that any public citizen has.”

Lundie noted that the County has implemented changes in response to the past year’s embarrassing performances: “Creating a back-up system, involving the Government Accountability Board directly in this process, training the municipal clerks around the county who are really doing the heavy lifting in this election and really doing these types of things to restore the public’s confidence.” He also emphasized that most of the work of counting votes is done by individual municipalities.

Reached over email, We Are Wisconsin spokesperson Kelly Steele said he expects Nickolaus will play a major role in tonight’s potentially pivotal Waukesha County vote tabulation. Steele noted the high level of personal control Nickolaus has exerted over the office’s system in the past, and how idiosyncratic that system has been. In 2010, the Journal-Sentinel reported that Nickolaus had transferred the system from a computer network to “stand-alone personal computers accessible only in her office.”

“Everyone from the Republican County Executive's office to the Milwaukee Journal-Sentinel's editorial board -- two entities completely in the tank for Scott Walker -- have said Waukesha County's elections will have no credibility as long as Kathy Nickolaus is involved,” wrote Steele. "The notion Nickolaus is just 'hanging around' in case her boss-for-a-night/subordinate-every-other-moment needs 'help' would be comical if the stakes weren't the future of Wisconsin's democracy.”  We Are Wisconsin is the main labor-backed coalition pushing the recalls.

Waukesha County Supervisor Larry Nelson, a Democrat and former mayor of Waukesha, thinks such concerns are overblown.  After the previous debacles, says Nelson, “my understanding is that Shawn and the consultants that worked with the county also worked with the GAB to make sure that our practices were in line with what the rest of the state was doing.”  He said reports that Nickolaus appeared to be running the show last month may have been based on her posing like she was still in control in order to avoid embarrassment: “You can understand why she wants to save face and not look bad.”

Before, says Nelson, “she was putting up lists like grocery lists” on the wall.  “That’s not happening anymore.”