The label may have outlived its usefulness, but the political experiment it describes carries on 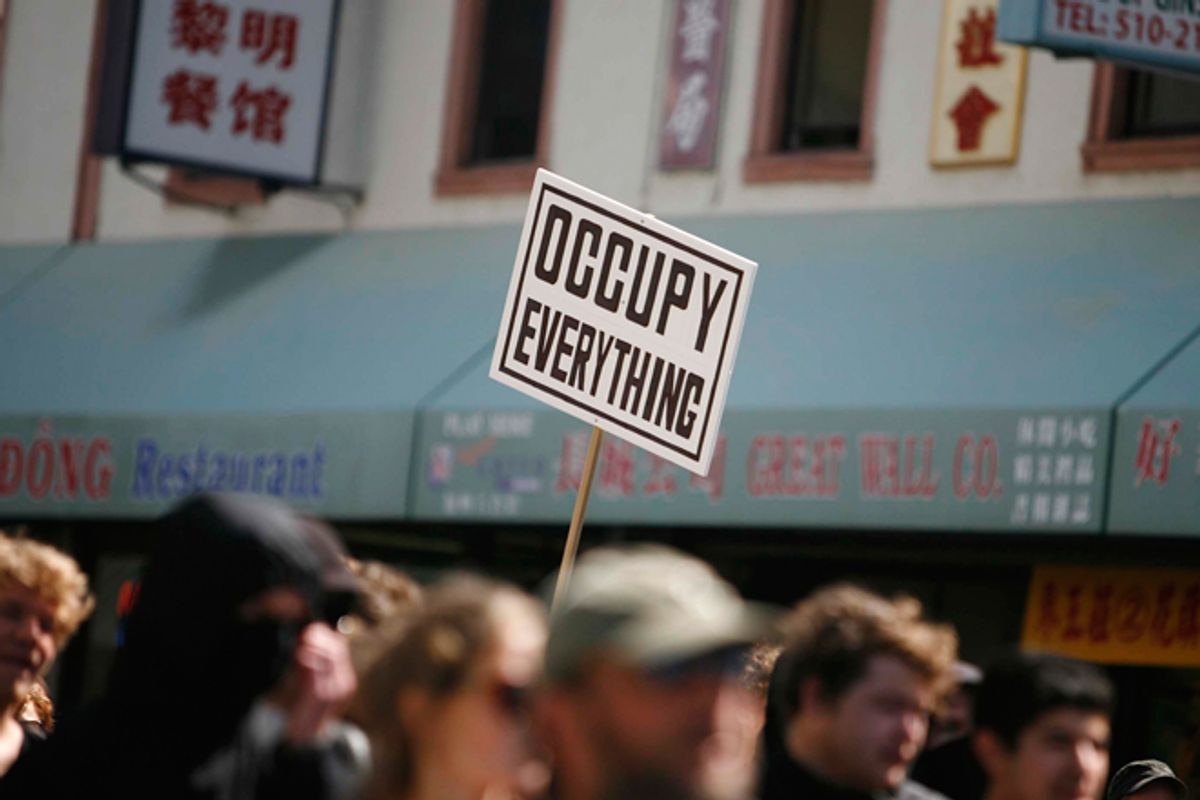 Let's not debate the death of Occupy. We'd never even agree about what might have died, or is dying or not dying, or is living forever. "Occupy" has, especially since the eviction of its encampments but before that too, been a constellation of meetings, actions, affinities and attempted interventions in politics and life-as-usual. There's never been one body, or even one movement, that could live or die together.

Pundits, and even long-term Occupy participants, can argue back and forth ad nauseam about what the metrics for Occupy's death or endurance might be (crowd numbers, Google searches, policy shifts, changes in national political discourse, media attention and so on), but let's not. Instead, all I want to suggest here is that those of us who have been commentating on, interested in, supportive of and even involved in Occupy actions put an unfortunate and unnecessary limitation on the terrain of politics outside the electoral horse race if we can only talk about, or in terms of, "Occupy."

The first point to make is that, in some sense, the phrase "Occupy" is not going away any time very soon. Twice in the past two weeks, hundreds of people have gathered in New York City for unpermitted street marches in solidarity with the ongoing student strike and generalized dissent in Quebec; on both occasions, alongside broad banners calling for "infinite strike" and free education, huge Occupy banners have spanned traffic-stalled streets. Beyond that, across the country many groups still rally around the title -- Occupy groups from Buffalo, N.Y., to Berkeley, Calif., continue to organize around foreclosure defenses, divestment campaigns from big banks and attempts to reclaim land and space.

You could fairly argue that Occupy has not grown, as some organizers might have desired, into a large, cohesive movement with concrete plans to "get money out of politics." (As an aside, having briefly worked and lived in Washington myself, I've always struggled with what "getting money out of politics" in our current system could practically mean; it seems akin to arguing for "getting politics out politics.") But many of the early participants in the large assemblies in New York last summer, which organized to Occupy Wall Street on Sept. 17, never wanted to build a movement per se; "occupy" was a tactic, a banner under which to create public spaces and forums and to intervene in the assumption that politics is just about voting or supporting candidates or campaigns.

Personally, I'd love to say goodbye to the banner of "Occupy," and here is why: If there still needs to be a banner or title to refer to or instigate instances of direct action or claiming public space, well, then these things have not generalized. But, of course, it's pretty hard to generalize a radical rethinking of politics and space when every public assembly to do so is shut down and harassed by police departments, city councils and a vast national security apparatus. Just last week, the NYPD illegally closed and barricaded Tompkins Square Park with some members of the public stuck inside, to prevent a Quebec solidarity march from reconverging in this purportedly public space. Little wonder, then, that organizers and agitators cling to a rally cry like "Occupy" -- whatever can carry resonance over the sometimes brutal, sometimes insidious, relentless barrage of repression.

But as such, using the banner "Occupy," even quite literally painted on fabric in front of a street march, should be considered a tactic. And tactics can't be good or bad per se; they have to be contextualized -- they are good and bad for certain things at certain times. Last fall, the call to occupy was a profoundly effective tactic to bring people together to enact politics differently. As anthropologist David Graeber, who has been present and active in Occupy planning since last summer, said on Julian Assange's television show, contesting spaces in cities and asserting "this is a public space" was an "enormously creative" move last year. If we talk in terms of Occupy as a movement or group that can grow, live or die, we're not thinking about it as a tactic of creative political experiment, which seemed to me the most powerful, genuinely life-changing aspect of what "Occupy" could mean. And what other types of political experimentation might we be ignoring if we get stuck thinking, "What's next for Occupy?"

One of the best examples of these sorts of experiments are the solidarity marches taking place in New York, Chicago, Oakland, Calif., and beyond. Students and non-students alike have been taking to the streets, donning red patches in reference to the striking students and their supporters in Quebec, where draconian anti-protest laws are being defied with nightly marches. The idea, of course, is not just solidarity, but agitation -- the notion that actions in Canada will inspire strikes against debt peonage here. It's an experiment in its early stages -- who knows what will happen, either in Quebec or this side of the border. Whether these solidarity marches are or not "occupy" seems the least interesting questionof all  to ask.

In some instances over the past eight months, Occupy has provided a space for the informal organization of a number of individuals, groups or even political tendencies. Such spaces can and do remain useful, but not as a tight-knit group with agreed aims. Indeed, as long-term Occupy Wall Street participant Marisa Holmes put it, "There is a danger of being swallowed by the very creature we brought into being," meaning that the anarchist practices of autonomous organizing and direct action -- the idea of opening up new political spaces -- risks getting lost in the institutionalization of an idea like Occupy.

Luckily, as I see it, building a big, unified movement hasn't worked. New and perhaps long-lasting affinities have been made, and indeed Occupy has been and may continue to be their reference point. That's fine. But the threat to politics and business-as-usual (felt so strongly that it garnered militaristic repression) did not happen last year because lots of people found affinity with the label "Occupy," but rather because a few thousand people creatively contested space and standard forms of political organization. Many of us have hope that this summer will see many more such creative, bold acts; many of us don't care if the word "occupy" appears at all.