Indicators suggest a record number of voters are going to the polls -- but will they be enough to lift Tom Barrett? 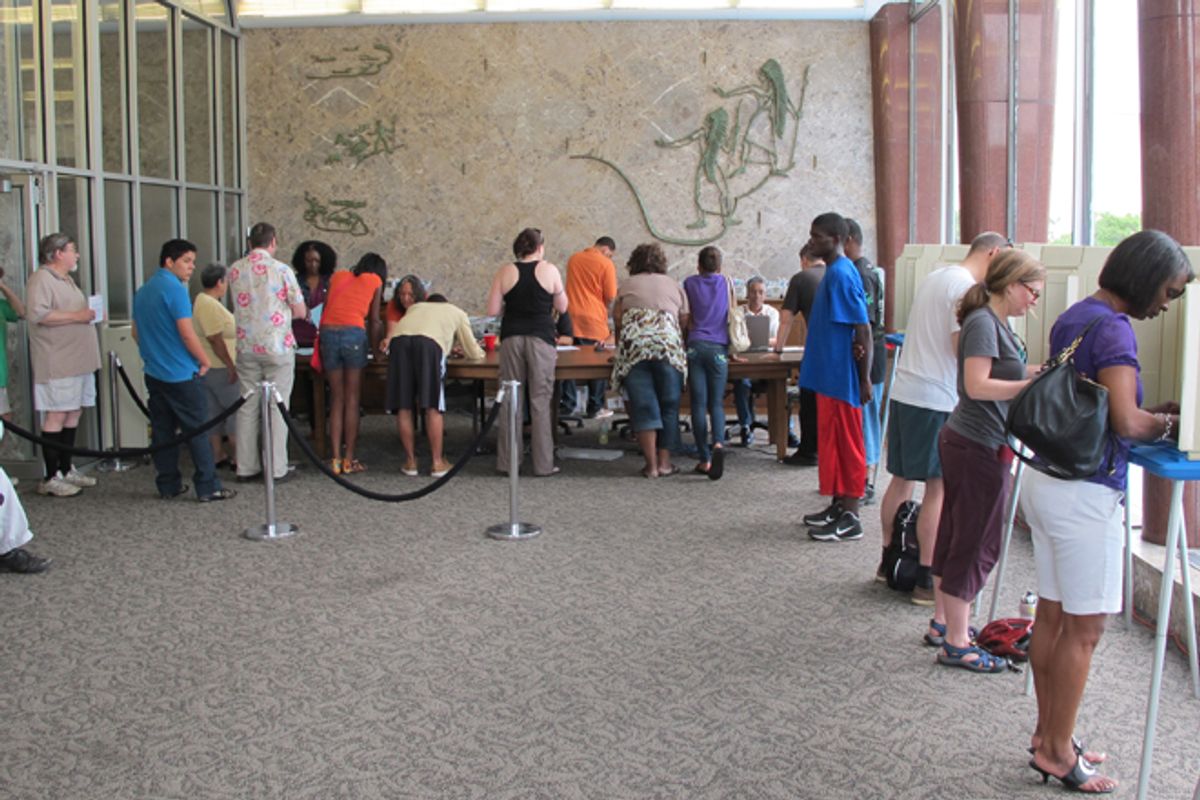 It’s a cliche, but today’s recall election in Wisconsin will come down to turnout. And, so far, voters are turning out in potentially record numbers across the state. Officials and observers predicted big numbers for an off-year election, but the numbers may trump even those high expectations, as some precincts predict they’ll have bigger turnout than 2008’s presidential election.

Officials predicted turnout to reach 60 to 65 percent today, but Douglas County Clerk Susan Sandvick said, "I'm thinking that we might even get a little higher than that, in considering too that there was a high amount of absentee voting that occurred also.” Statewide, 200,000 requested absentee ballots.

Democrat Tom Barrett will no doubt be closely monitoring turnout in Milwaukee, where he is the mayor and draws a strong base of support. It’s likely good news for him then that heavy turnout led the city Election Commission to send in extra poll workers to at least eight stations. “We knew things would be busy, but we didn’t know how busy,” said Sue Edman, the election commission’s executive director. Officials report the increase is due in part to “a significant number of new voters ... registering at the polls” -- another good sign for Barrett.

There are also long lines in liberal Dane County, which contains Madison. "We could hit 80 to 88 percent," Peters said of Dane County's turnout. That would be huge numbers that could help drive up Barrett's totals. County Clerk Karen Peters called the outpouring of people "just wild." The turnout in the liberal bastion is sufficently high enough to worry some conservatives, as the Weekly Standard already published an item arguing that “the increased turnout in Dane County may not be enough to put Tom Barrett over the top.”

But there was strong turnout in strongholds of Republican Gov. Scott Walker as well, like Delafield, where 2,076 ballots had been cast by noon in a city that went 2-to-1 for Walker over Barrett in their first matchup in 2010. The same was true in the City of Oconomowoc, where there was a line of voters more than 20 deep in the early afternoon.

Port Washington, in the conservative Milwaukee suburbs, saw a polling place inside a school gym get packed just 10 minutes after polls opened at 7 this morning. "I've never seen anything like it," a veteran poll worker told the local Patch site. The story is the same in other suburbs, according to the site, which tend to vote Republican and are crucial to Walker’s math.

While there is certainly a strong headwind blowing against Democrats, the latest polls suggested Barrett had some modest momentum. That, combined with greater-than-expected turnout in liberal precincts, could be enough to sway things. Maybe.

Exit polls won’t begin coming out until 5 p.m. local time, while actual results will come after the polls close at 8.