CEO Tim Cook says he wants to bring manufacturing back to America. But the company's profits tell a different story 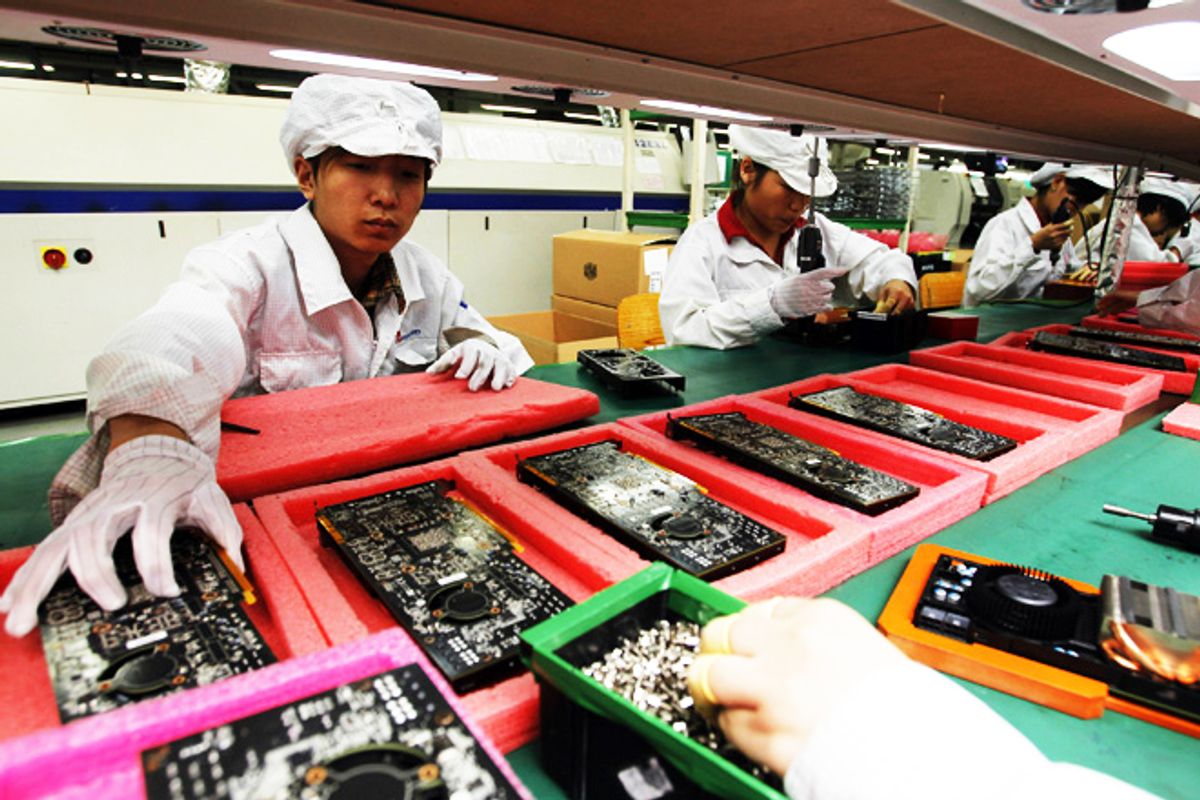 Staff members work on the production line at the Foxconn complex in Shenzhen, China. (AP/Kin Cheung)
--

Does Apple Computer really "want" to bring jobs back to America? If you heard company CEO Tim Cook late last week, you might think it does. But that shouldn't necessarily be reassuring, because the desire is likely contingent on certain conditions that aren't so rosy.

To review: Last week at the D10 conference, the Wall Street Journal's Walter Mossberg invoked Apple's long-shuttered U.S. factories to ask Cook, "Will there be an Apple product ever made again in the United States?" The question followed a year of revelations by Wired magazine, the Investigative Reporting Workshop and (belatedly) the New York Times about Apple's effort to shift production to exploitative facilities in China. Cook, well aware of that bad publicity, responded to Mossberg by saying, "I want there to be ... There are things that can be done in the U.S., not just for the U.S. market, but that can be exported for the world."

To understand the meaning of Apple's alleged desire to repatriate jobs, it's worth asking a follow-up question (which Mossberg did not ask): Why did the Apple jobs leave America in the first place? Answering that, after all, would give us a sense of what it might take to bring Apple jobs back. But, then, answering that gets us to a sordid story that isn't brought up in polite company at high-tech conferences -- and isn't a reason to feel so optimistic about the economy.

Two anecdotes and one simple pie chart tell that inconvenient tale. The first, from the Investigative Reporting Workshop, details why Apple closed its factory in Fountain, Colo.:

In 1996, the moneymen on Wall Street decided Apple was not living up to their expectations. Earnings had sagged. To raise cash and bolster the bottom line, the company was forced to unload assets. The Fountain plant was sold, just four years after it had opened. The plant was profitable and well-run, but Wall Street’s relentless focus on short-term earnings demanded results...

An Alabama-based electronics vendor and outsourcing specialist, SCI Inc., bought Fountain for $75 million with an agreement to continue manufacturing Apple computers on site for three years ...When the contract to make Macs expired in 1998, Apple didn’t renew, and the manufacturing shifted offshore.

The second, from the Times, outlines the situation at Apple's plant in Elk Grove, Calif.:

A few years after Mr. Saragoza started his job, his bosses explained how the California plant stacked up against overseas factories: the cost, excluding the materials, of building a $1,500 computer in Elk Grove was $22 a machine. In Singapore, it was $6. In Taiwan, $4.85. Wages weren’t the major reason for the disparities...

“We were told we would have to do 12-hour days, and come in on Saturdays,” Mr. Saragoza said. “I had a family. I wanted to see my kids play soccer.”

To summarize: Apple originally eliminated its American manufacturing workforce because its investors demanded even higher short-term profits than its already-profitable American facilities were delivering. That led the company -- like so many others -- to use America's tariff-free trade laws to shift production to Asia, where profits could be boosted by slave wage rates and sweatshop conditions. In other words, Apple reconstructed its business around a trade system that allows it to make products at Chinese wages and in Chinese conditions -- all while selling those products at American prices.

The result is this:

That pie chart,  constructed by University of California and Syracuse University researchers, represents where all of the money goes when you purchase an iPhone. Obviously, it represents exactly the business model that Apple shareholders want and that our free-trade system encourages. In fact, if there could be one image locked away in a time capsule so that future generations could understand this moment's quintessential business model, it would be this pie chart, showing a tiny slice of investment in the foreign workers who actually make the products (listed as "China labor" and "non-China labor"), relatively small profits for foreign subcontractors, manageable material costs and the lion's share of the pie pocketed as pure profit.

Apple's CEO answers to shareholders, and so, presumably, for job security's sake, he doesn't want to see a fundamental change in the complexion of this pie chart -- more specifically, he doesn't want to see that huge red chunk get any smaller because it goes directly to his paymasters (most recently in the form of a dividend and stock buyback).

Thus, in order for Cook to realize his alleged desire to repatriate jobs, it means a) higher prices for Apple products to finance the higher labor costs (read: wages) that come with re-Americanizing the labor slice of the pie or b) keeping Apple product prices the same, but finding American workers who will work for something close to Chinese wages or c) some combination of A and B. However, since Apple products are typically more expensive than their counterparts, company executives probably believe competitive cost pressure leaves them little room to raise prices, meaning we're really talking about a little of A and a lot of B.

If that path to re-Americanizing Apple and the larger tech industry sounds like a fantastical dystopia fit only for a cheap sci-fi novel, but not some very possible future reality, think again: It's precisely what corporations are now banking on as our offshore-encouraging tax and trade policies get cemented for the long haul. As the Boston Consulting Group recently reported:

Reinvestment During the Next Five Years Could Usher in a ‘Manufacturing Renaissance’ as the U.S. Becomes a Low-Cost Country Among Developed Nations

Within the next five years, the United States is expected to experience a manufacturing renaissance as the wage gap with China shrinks and certain U.S. states become some of the cheapest locations for manufacturing in the developed world, according to a new analysis by The Boston Consulting Group (BCG).

This is exactly why Cook was telling the truth when he said he genuinely "wants" Apple to bring jobs back, and that there "may" be a time when Apple products are once again manufactured here. There very well may be -- but not because of wage and standard-of-living trends we should be excited about.