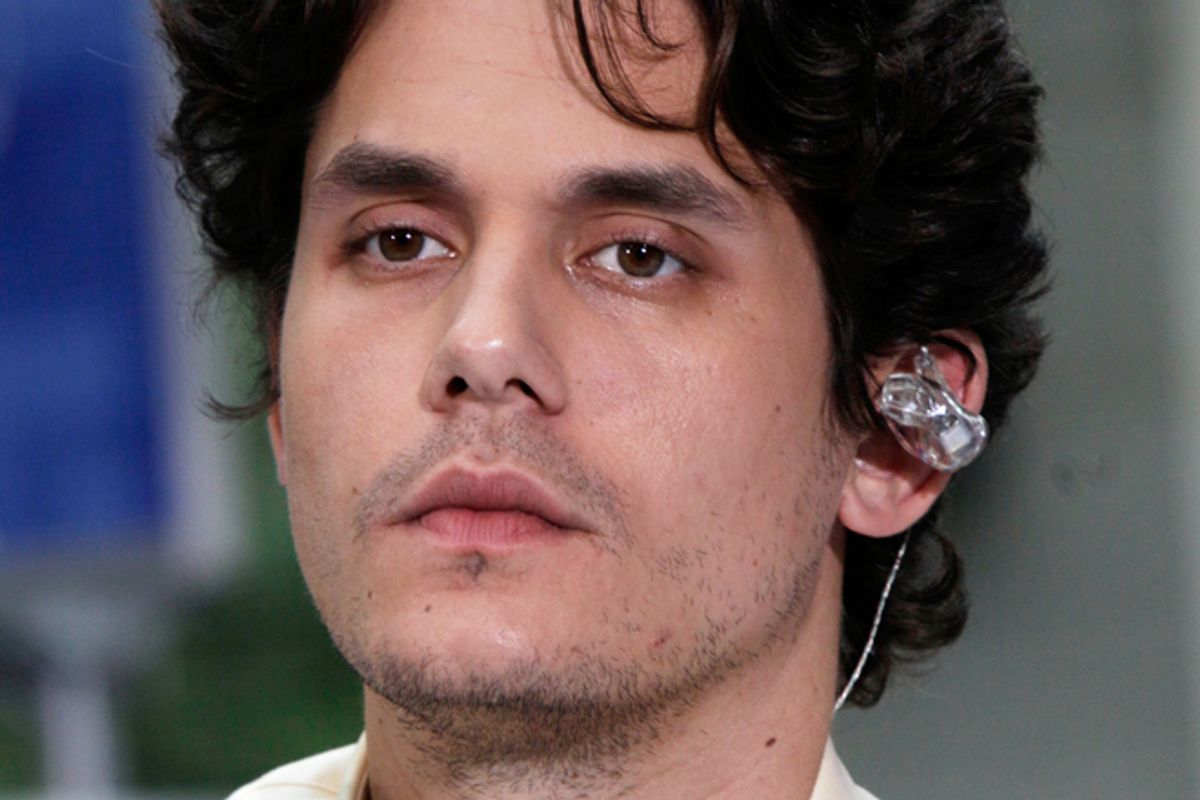 In case you were wondering, John Mayer is still a raging tool.

The verbally incontinent singer, currently perched atop the Billboard album chart, has been relatively quiet the past few years, ever since a series of foot-in-mouth incidents led him to announce he just should "have given that up and played the guitar." But in a new interview in Rolling Stone, he's at it once again, trash-talking about his romantic history and criticizing another woman he somehow persuaded to get with him. His latest victim? America's sweetheart, Taylor Swift. Don't call it a comeback!

We should have just pulled up our chairs for a ringside seat the minute the deeply confessional Swift locked eyes on a man who says things like "I can fire alien weapons. I can insert a tampon." How could it not end with a train wreck and a few hit singles? We'll never know exactly what went down after the two collaborated (COUGH COUGH) creatively in 2009 -- when Swift was 19 -- but the fact that a song titled "Dear John" cropped up on her next album, "Speak Now," may have been a clue.

Swift has never singled out the John in question, but she has admitted "Everyone will know, so I don't really have to send out emails on this one." "Don't you think 19's too young to be played with?" she sings on the track, crooning of "you and your sick need to give love and then take it away" and "your dark, twisted games." This hurts John Mayer's feelings.

"It made me feel terrible," Mayer says in the interview, which comes out Friday. Sure, who'd be pleased to have his romantic failures turned into radio-friendly pop tunes? Imagine how Adele's ex-boyfriend must feel. But Mayer does not feel terrible because he apparently "played with" a teenager's feelings. No, he feels bad "because I didn't deserve it. I'm pretty good at taking accountability now, and I never did anything to deserve that. It was a really lousy thing for her to do. I was really caught off-guard, and it really humiliated me at a time when I'd already been dressed down. I mean, how would you feel if, at the lowest you've ever been, someone kicked you even lower?"

In the words of Gwyneth Paltrow, hold up. I don't know, John Mayer, how would it feel if you'd ever been involved with a person who, three years ago, told the New York Times that "I equate dating a woman with punishment, shame, guilt, disappointment, reproach, reprimand, persecution. It’s a nightmare." Who two years ago, went cuckoo in an interview for Playboy in which he asserted, among other things, that "My dick is sort of like a white supremacist. I’ve got a Benetton heart and a ... David Duke cock." I bet it would be mortifying. And I wonder how Jessica Simpson felt when Mayer publicly stated that boning her "was like napalm, sexual napalm," or how Jennifer Aniston felt when her ex-boyfriend said she's "still hoping it goes back to 1998." Face it, John Mayer complaining about Taylor Swift's lack of discretion is like Kanye West kvetching about her lack of restraint.

But Mayer didn't stop there in his RS interview. On a roll, he went on to say that "as a songwriter that I think it's kind of cheap songwriting. I know she's the biggest thing in the world, and I'm not trying to sink anybody's ship, but I think it's abusing your talent to rub your hands together and go, 'Wait till he gets a load of this!' That's bullshit." That's just his professional opinion. As a songwriter. Because as a songwriter, when he sings, "It takes a fool to love you … call the press and say my life is a mess," that's not about anyone at all. And apparently it's not OK to rag on your exes -- unless you're John Mayer.