The science-fiction icon transformed the genre, but behind dystopian stories was real hope for the future 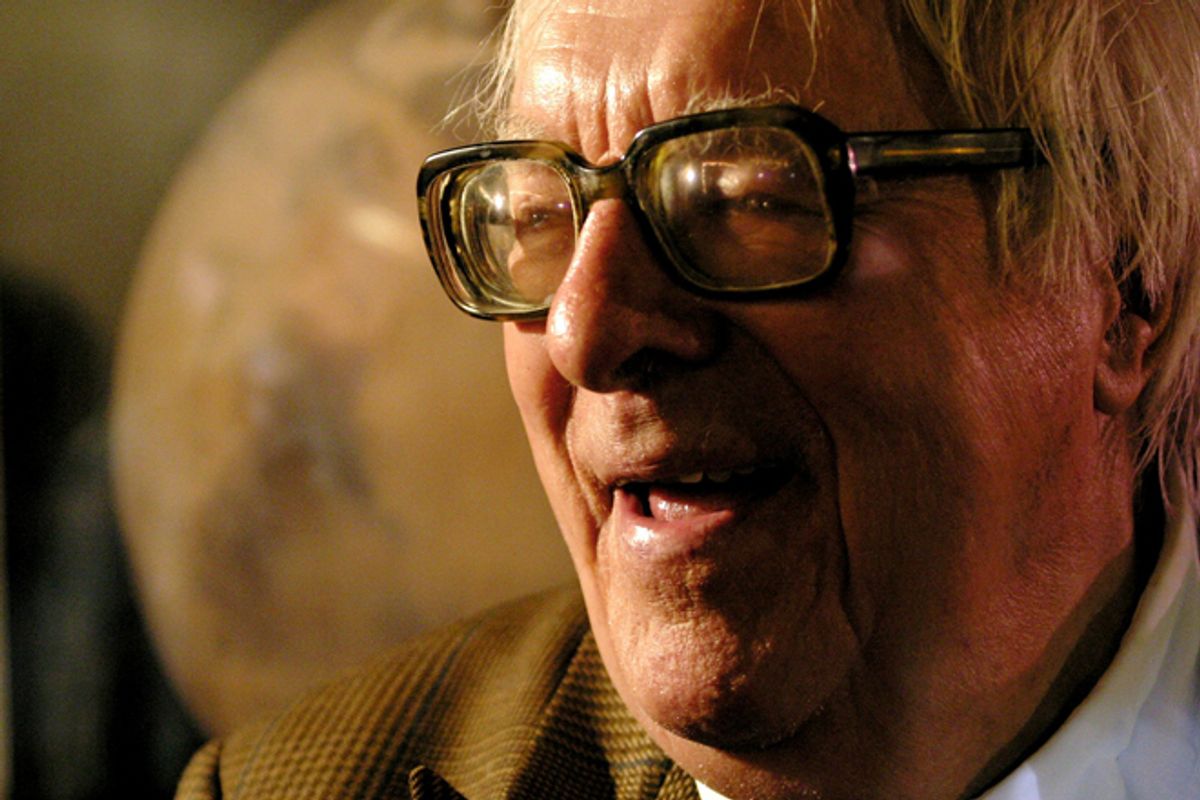 My friend Ray Bradbury passed away this morning. While 91 is certainly a ripe and full age, especially for a revered figure who leaves behind a vast and highly esteemed legacy, there is still a certain bittersweet, knowing that he worked until the very end. Science-fiction authors never retire, you see. The need to spin yarns -- to weave dreams about tomorrow -- is always the last thing to go.

Ray was the last living member of a "BACH" quartet -- writers who transformed science fiction from a pulp magazine ghetto into a genre for hardcover bestsellers. Isaac Asimov, Arthur Clarke and Robert Heinlein helped shatter barriers for the rest of us, establishing the legitimacy of literature that explores possible or plausible tomorrows. But it was Bradbury who made clear to everyone that science fiction can be art. An art form combining boldness and broad horizons with sheer, unadulterated beauty.

And love. Ray always spoke of it. Love of possibilities and imagination. Love of language, the rolling of phrases off tongue and pen. Also hope, without which, love is sterile.

Ray Douglas Bradbury was born in 1920, in Illinois, but at age 13 became a lifelong resident of Los Angeles, graduating from L.A. High School in 1938 ... exactly 30 years before I did. Among many early influences on a fertile young imagination was the (way cool, to a child) fact that one ancestress had been executed as a witch in Salem, Mass., in the 1600s. He described the lasting impressions left by early Lon Chaney films, or when a stage magician touched him on the nose with an electric sword, commanding him to "live forever!" Like my own father, he nurtured his love of writing in free public libraries and while hawking newspapers on Depression-era street corners. And, as did many authors who followed, he got his start writing stories for mimeographed fan publications, climbing gradually upward while honing his craft.

Sometimes luck can strike like lightning. When Ray got the celebrated British expatriate  writer Christopher Isherwood to take a look at the manuscript for "The Martian Chronicles," the resulting review launched Bradbury ... well ... not out of poverty, not yet, but into a career. One that later took him through Hollywood, scripting films like "Moby Dick," as well as into television and punditry, all while helping raise four daughters and penning one luminous book after another, exploring the edges of the barely plausible.

But I'm not here to write a biography. This is an appreciation and, hence, in keeping with Ray's own style, let me give way to impulse. To passion.

Indeed, I referred earlier to Ray's fervent dedication to love and hope and the power of words that yank at us, compelling empathy. But there was another emotion that he would evoke, from time to time. One that always left a lasting impression on audiences, when he gave one of his popular lectures.

Onstage, Ray Bradbury could wax eloquently and vociferously angry at one thing, at one human trait -- cynicism. The lazy habit of relishing gloom. The sarcastic playground sneer that used to wound him, and all other bright kids, punishing them for believing, fervently, in a better tomorrow.

Ray had one word for it. Treason. Against a world and humanity that has improved, prodigiously, inarguably, fantastically more than any other generation ever improved, and not just with technological wonders, but in ethics and behavior, at last taking so many nasty habits that our ancestors took for granted -- like racism or sexism or class prejudice -- and, if not eliminating them, then at least putting them in ill repute. Ray spoke of the way violence has declined, worldwide, long before Harvard professor Steven Pinker clarified the case, in his recent book "The Better Angels of our Nature."

Yes, Bradbury's stories and novels often plunged fearlessly into dark, foreboding themes. The world ends in "The Illustrated Man" and we decline into Big Brother levels of dystopia by the unusual path of liberal political correctness in "Fahrenheit 451." We are reminded of villainy in "Something Wicked This Way Comes." After reading "All Summer in a Day," the reader knows with utter clarity, how basic is the tendency toward cruelty, and that childhood is neither pure nor innocent.

Could anyone reconcile this chain of chillers with overall optimism?  Ray did. Human beings are fretful creatures, he said. Our skulking worries often cause us to shine light in dismal corners, and thus help us to do better! To be better.

Good literature has that power.  Indeed, science fiction offers writers a chance to create that most potent work, of which "Fahrenheit 451" is a prime example. The self-preventing prophecy that so shakes up readers that millions of them gird themselves to prevent the nightmare from ever coming true. That’s power.

Moreover, even someday, when we've tamed our surface selves, growing up in our fair interactions and behaviors, partaking of a mature civilization, there will still endure, below the patina, a roiling, molten species, fevered with impulses and wild dreams. Far from becoming pallid beings, we’ll love to tell ghost stories by firelight and shiver at the touch of chill fingers up the spine. Why would we ever give that up?

Ray Bradbury saw optimistic progress and dark fantasy as partners, not opposites. On camera, during the moon landings, he could not stay in his seat! And he demanded that others get out of theirs. Long before Peter Finch did it in "Network," Ray demanded that viewers stand up, step outside and shout!  Only, instead of cynical resentment, he insisted that we "get" what had just happened, how we had – all of us – just become a bit more like gods.

Those who yawn at such achievements, he denounced, calling them "ingrates." And ingratitude he deemed one of the lowest human vices.

Ray was grateful, always, for what life had allowed a geeky youngster to do. I am thankful that he was my friend. And we who love both words and freedom of the mind should all feel gratitude today. For all those wonderful words.

David Brin is an astrophysicist whose international best-selling novels include "Earth," and recently "Existence." " The Postman" was filmed in 1997. His nonfiction book about the information age - The Transparent Society - won the Freedom of Speech Award of the American Library Association.  (http://www.davidbrin.com)