The Kansas Sec. of State already has Romney's ear on immigration. Will the candidate follow him on other issues? 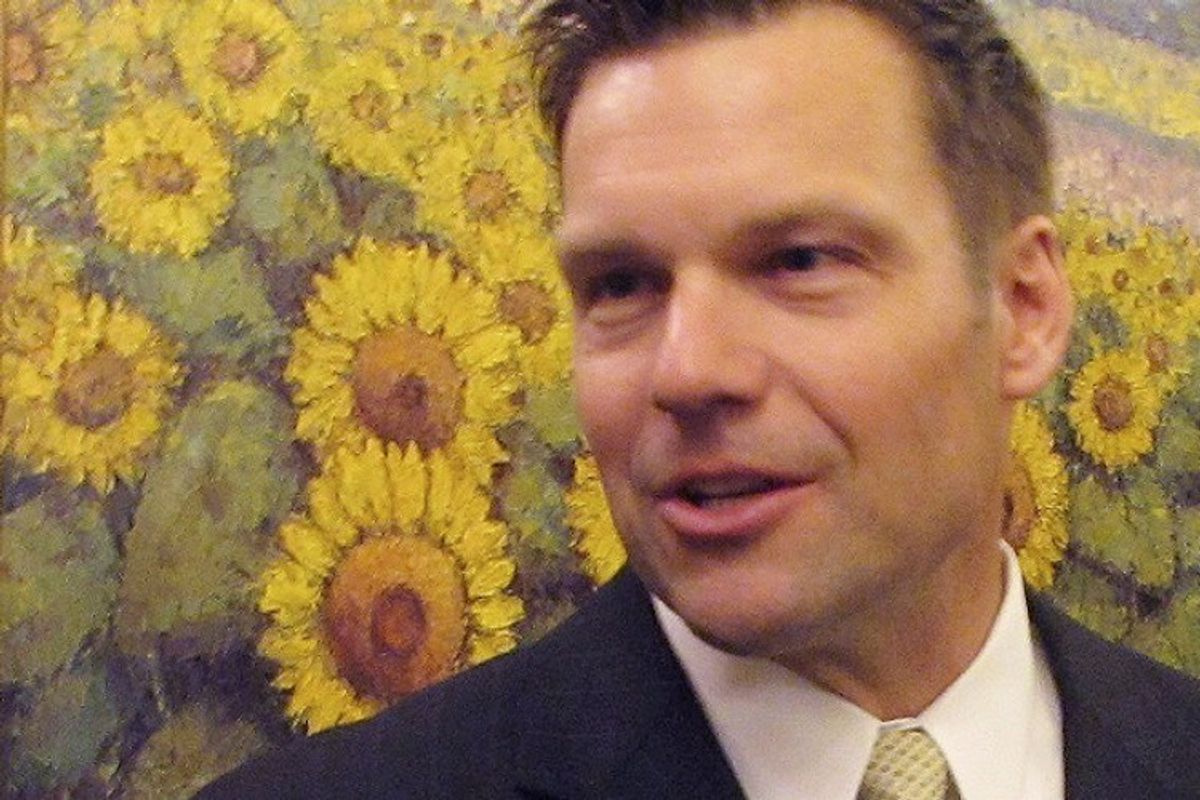 While Kansas Secretary of State Kris Kobach has received the most attention for getting Romney to endorse his hard-line views on immigration, his philosophy of law is much broader. For Kobach, a graduate of Harvard and Yale Law School, immigration enforcement is just one part of a broader strategy that is creative and persistent in seeking to consolidate radical Republican power at every level of government. He is popular with the Republican rank and file.

There's no telling what role Kobach might have in a Romney administration. While Romney echoed his rhetoric on immigration, his campaign also made an effort to downplay his influence, telling Politico in April that he was a "supporter," not an "advisor." Kobach countered by citing a campaign press release in which Romney said he was "part of the team." Kobach said he remained in regular contact with campaign officials, a claim that Romney aides did not dispute.

Kobach certainly has support among movement conservatives who are most likely to compete for key positions if Romney is elected. Kobach held a mid-level position in the Bush Justice Department overseeing deportations of illegal Muslim immigrants. Unlike many movement conservatives, he supported no other candidate before joining the Romney campaign. He is probably too polarizing a figure to win consideration as attorney general. But if Republicans win a Senate majority in November, a high-level post is not out of the question and a position of influence seems likely.

And influence is what Kobach already has over the Republican message on a host of issues, not just immigration. Romney has not publicly disagreed with anything on Kobach's agenda and at least tacitly endorsed much of it. If Kobach's record in Kansas is any indication of Republican intent, confrontation will be the order of the day. Of course Democrats and undocumented immigrants can expect challenges, but so can voters of any party who don't have driver's licenses, moderate Republicans, and any state interested in helping undocumented students stay in school.

In April 2011, the Kansas Legislature approved a voter identification bill, drafted by Kobach, which requires proof of citizenship to register to vote and possession of a state photo identification card to cast a vote. Would-be voters are finding election officials unprepared to help them even a year later, according to Louis Goseland, coordinator of KanVote, a coalition of community groups that seeks to expand the franchise.

After the law went into effect in January, a group of voters went to the Department of Motor Vehicles in January to find out how they could comply with the new law. "They were segregated from the rest of those doing business and not allowed to address their individual questions to DMV employees, only to a supervisor," Goseland recounted in an interview. "The supervisor was not able to answer questions of eligibility and referred them to other agencies."

The provisions of the law, intended to prevent voter fraud, had the effect of preventing U.S. citizens from voting.

Kobach defended the law at a public meeting last week where he faced hostile questioning, according to the Wichita Journal.

Most of those who spoke accused Kobach, who had sought the changes, of using a relatively small number of suspected cases of voter fraud to make the voting process more complicated and inconvenient in order to suppress voting by some segments of the population, including the poor, elderly and minorities.

Kobach denied that suppressing votes was his goal, and he argued that the changes would be easy to comply with.

But how will voters know what the changes are? The Kansas secretary of state website page on "Voting and Registration" links to a text of the so-called SAFE Act law, but the page does not summarize the law's provisions or how they differ from the past. Nor does the page provide any information about how to obtain state photo identification.

"They've done a good job of restricting who can vote but they've done very little to train county officials to ensure that people can vote," Goseland said.

2) Defend the creation of obstacles to voting with the Voting Rights Act.

In a radio interview this week, Kobach said that he was is pleased that Kansas, unlike the 13 states of the former Confederacy, is not subject to the terms of the Voting Rights Act, which outlaws discriminatory voting practices, and could therefore implement its voter ID law without approval from federal officials.

The implication seems to be that the enforcement of the Voting Rights Act ought to be directed at "liberal organizations." This would twist the intent of the law, which was intended by President Lyndon Johnson and Congress to end the legacy of legal segregation imposed by Southern state governments after the Civil War.  But it would be consistent with the right-wing hoax that the New Black Panther party, a fringe group best known for appearing on Fox News, is a threat to the rights of white voters.

3) Use redistricting to marginalize Republican moderates.

For months Kansas has been locked in a legal showdown over the shape of the state's legislative districts. Kobach and fellow conservatives are seeking to get a federal court panel to approve a districting map that will advance their goal of defeating their Republican rivals.

As the Wichita Eagle reported this week:

While all maps are in play, the real fight is over the Senate, where moderate Republicans hold sway and can occasionally thwart or modify the more conservative policies favored by the governor and the House. Conservative interests have vowed to unseat as many as eight moderates in Republican primaries in an effort to gain control of the chamber.

When other groups sought to weigh in on the proposed maps, Kobach asked the court to limit  the number of individuals who could intervene.

“It seems like you’re trying to restrict the information that comes to us,” federal Judge Kathryn Vratil told Kobach in overruling his request.

"Kobach’s activism, as a point man for the far right of the Kansas GOP, places him at odds with the democratic principles he’s charged with upholding as the state’s election officer," wrote Gwen Mellinger, a columnist for the Topeka Capital Journal.

Because the Justice Department can challenge congressional districting plans in states covered by the Voting Rights Act, a Romney administration could seek to tailor those plans to meet far-right electoral goals as Kobach has sought to do in Kansas.

4) Challenge states that take a welcoming stance toward immigrants, legal and illegal.

Kobach has sued California and his own state of Kansas seeking to overturn laws that provide in-state tuition to undocumented resident students. Gary Sherrer, chairman of the Kansas Board of Regents, defended the state's law in 2010 saying it would be “nonsense” to penalize these students for a decision they had no control over. “I personally find it repugnant that these young men and women who have proven themselves are being batted around for purely political motives,” Sherrer said. Kobach says undocumented resident students should have to pay out-of-state rates.

Thirteen states have such DREAM Acts, i.e., laws designed to enable undocumented students to stay in school. All of them could face legal challenges from a Romney administration.

5) Back states with a hostile stance toward immigrants that promotes "self-deportation."

Last but not least, Kobach is best known for writing anti-illegal immigrant laws for Arizona and Alabama, which have become showcases for his policy of "self-deportation," which seeks to make life so difficult for illegal immigrants that they voluntarily return home. During the Republican primary season, Romney endorsed "self-deportation," which Kobach hopes will result in the departure of 5.5 million undocumented resident aliens by the end of Romney's first term.  More recently, Romney has emphasized the need to create jobs when speaking to Latino audiences and dropped his advocacy of "self-deportation." Kobach has not.

While Florida Sen. Marco Rubio has proclaimed the need to moderate the party's message on immigration and floated the idea of a Republican variation on the DREAM Act, his proposal has yet to materialize or attract much support in the party. Kobach's much broader and more ambitious agenda is more popular with today's Republicans.