Walker wins one for the plutocrats

Outspent 7-1, Democrats couldn't beat Scott Walker with a strong ground game. What does that say about November? 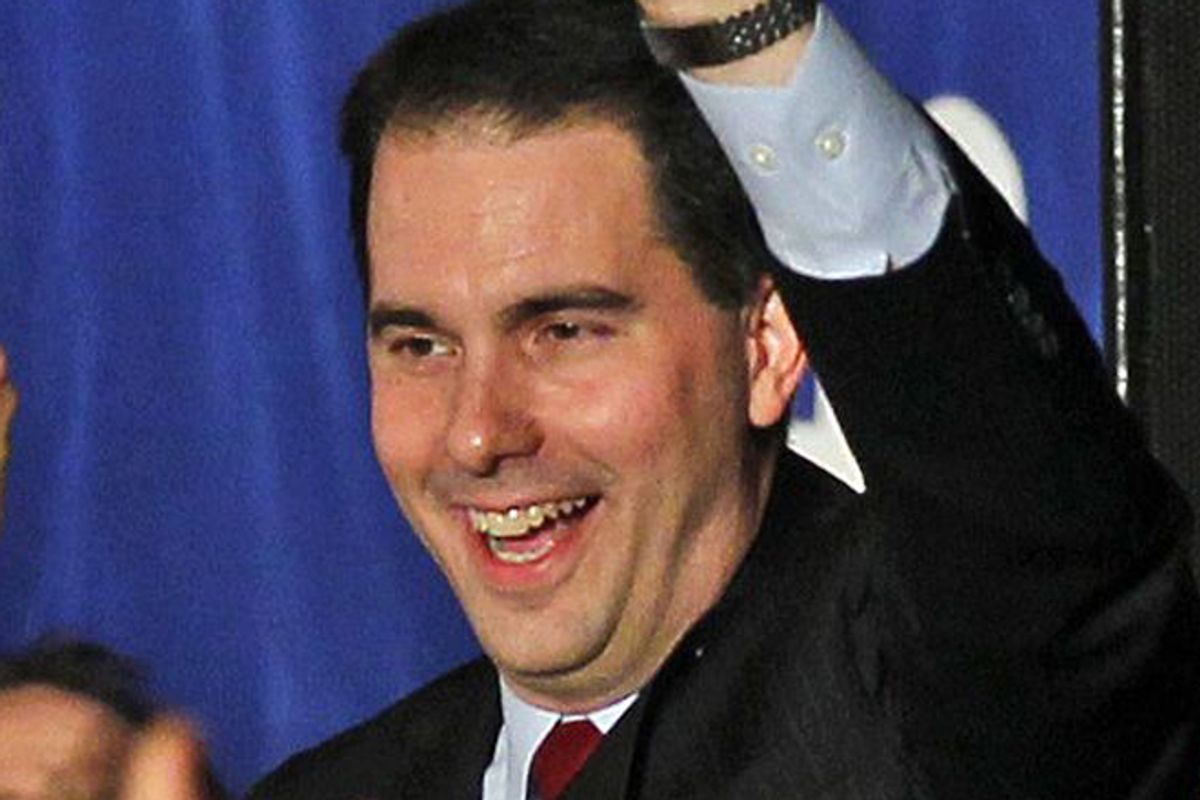 At about 3 p.m. Wisconsin time Scott Walker tweeted: "President Reagan died on June 5, 2004. Let's win one for the Gipper!" It was moment of grandiosity for a man who endured the shame of a recall election, then ultimately spent enough to survive it, but it wasn't the first time Walker invoked Reagan on one of his big days.

While talking to a prankster who pretended he was billionaire GOP funder David Koch more than a year ago, Walker confided what he did at a dinner for his staff the night before he unveiled his union-busting agenda. "I pulled out a picture of Ronald Reagan and I said 'You know, this may seem a little melodramatic, but 30 years ago Ronald Reagan, whose 100th birthday we just celebrated the day before, had one of the most defining moments of his political career, not just his presidency, when he fired the air traffic controllers,'" Walker told the faux-Koch.

It turns out Walker's anti-union gambit was a defining moment for the modern Republican Party. When Reagan busted PATCO, the air traffic controllers' union, he accelerated the decline of the American labor movement, and American workers' wages have declined along with it ever since. When Walker moved against public employee unions, it was an effort to drive the final nail in labor's coffin, while defunding a crucial resource base for the Democratic Party. Plutocrats rewarded him handsomely for his work, shoveling money into Wisconsin and burying Democrat Tom Barrett with a 7-1 cash disadvantage.

Could it have been otherwise? Progressives got their hopes up in the last 24 hours, as polls tightened and reports of record turnout in Milwaukee and Madison let people believe an upset might be afoot. But the results were much what polls had predicted all along.  With hindsight, it was hard for it to turn out any other way. Wisconsin's was only the third gubernatorial recall election in history. I'm reluctant to cite exit polls that showed a much tighter race than the actual election, but 60 percent of voters polled said they didn't believe in recalls for anything other than "official misconduct." That was a tough hole for Barrett to climb out of.

He was also climbing out of a primary battle with labor favorite Kathleen Falk. Polls showed that people who made up their minds in the last month overwhelmingly chose Barrett, but that most people decided on the recall before May – when Democrats were fighting with one another and Walker was blanketing the airwaves with advertising. Most important, Barrett drowned in outside money, with two-thirds of Walker's cash coming from out of state, floods of it from the usual suspects like the Kochs, Sheldon Adelson, Foster Freiss and Bob Perry. So some very local factors went into Walker's win, but Democrats nationally are likely to face a big fundraising disadvantage in this post-Citizens United world.

There were a few other interesting tidbits in those not entirely reliable exit polls. Walker won big with folks making more than $75,000, but essentially split the votes of those making between $35,000 and $75,000, a group that Barrett should have captured had his message gotten through. Better news for Democrats: Walker won men 58-41, but Barrett won women 53-46. And President Obama led Mitt Romney among voters polled 52 to 43 percent; in fact, 17 percent of voters who said they back Obama went for Walker.

Should Democrats take comfort in Obama's Wisconsin numbers? David Axelrod did, tweeting it out as the polls closed. But in the end, the recall results probably tell us little about what will happen in November. I think the election could leave Obama stronger in the state, because the Democrats improved their ground game, even if it didn't turn out to be enough to unseat Walker. Yet there are reasons to look at Wisconsin and be worried about the national picture in November, chief among them the bottomless pockets of the GOP's plutocrat donor base.  The Democrats' stumble will also embolden those on the Occupy left who want labor and progressives to abandon the party, while bolstering the case of centrist and Wall Street Dems that the party can't afford to alienate the wealthy lest it suffer a 7-1 funding disadvantage nationwide. As to whether Obama should have visited Wisconsin to bolster Barrett, I still think what I thought Tuesday morning: It's complicated.

When Reagan busted PATCO, he not only weakened an institution that protects workers, but one that had become a foundation of the Democratic Party. Both results helped give the wealthy much greater political power. With Citizens United, the John Roberts Supreme Court sent us back to the Gilded Age, undoing a cornerstone of Progressive era reform, campaign finance. Walker's victory is just one more example of the way the modern right has turned back the clock. When Tuesday's results were in, Mitt Romney crowed that they "will echo beyond the borders of Wisconsin. Governor Walker has shown that citizens and taxpayers can fight back – and prevail – against the runaway government costs imposed by labor bosses."

Reagan also took the first step in transforming "labor bosses," and particularly public sector unions, into the new "welfare queens" he loved to rail against. I had hoped (as I've written many times) that the anti-Walker uprisings in Wisconsin, and against Measure 5 in Ohio last November, signaled a recognition by the white working and middle classes that some of them – cops and nurses and firefighters and teachers – have become welfare queens to the modern GOP.  But that hasn't sufficiently happened yet, though it must be said that plenty of white working- and middle-class folks put their heart and soul into the recall.   Walker's victory is a reminder of what Democrats face in November. Maybe that's a good thing.