The Green Lantern comes out today, using his superpowers to help integrate the comic book world 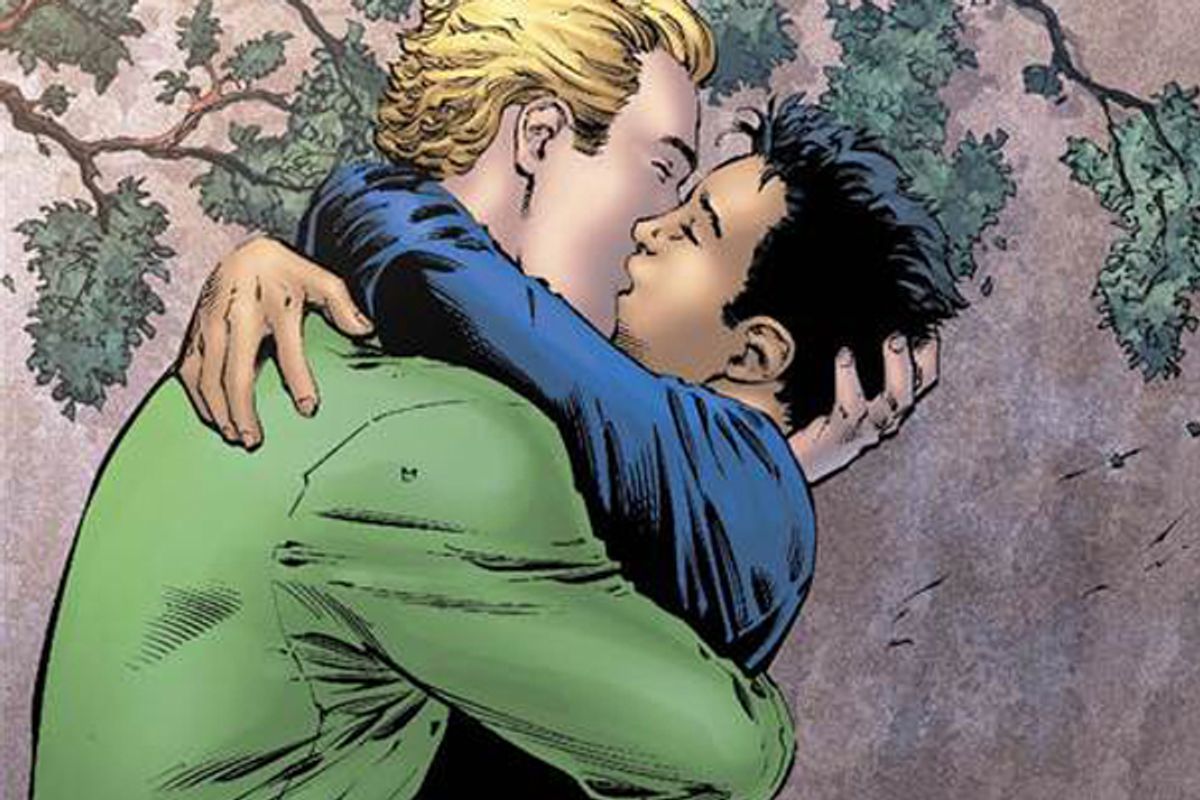 It's not the most surprising coming out of all time, but it's definitely one of the biggest. He's super. He wears a skintight green leotard and a flashy ring. He's a powerful part of the Justice Society. And yep, he's gay.

Every superhero has a few reboots in him. The nearly 72-year-old Alan Scott -- aka the Green Lantern -- has already gone through numerous incarnations  in his evil-fighting existence. He's been married. He's had kids. He's inhabited an alternate universe. You know, the usual life stuff. But his much-ballyhooed reinvention in DC Comics' "Earth Two" No. 2 is a milestone in comics history. Because now, the hunky blond is an openly gay man who gets to kiss his boyfriend and propose marriage to him. He's just your ordinary hero, balancing his private life and the fate of the planet. Hell, yeah.

It's been a good year to be a gay comic book character. Later this month, Northstar, who made history 20 years ago by becoming one of Marvel's first gay characters, will marry his partner, Kyle. And earlier this year, Archie Andrews' compatriot and Riverdale, U.S.A.'s first openly gay citizen, Kevin Keller, married his African-American boyfriend. One Million Moms had a predictable fit. The issue sold out.

Shaking up any franchise is a time-honored strategy of luring in new readers  --  and essential for economic survival. But just because something is a smart business move doesn't mean it isn't also awesome. If we assume the universe is riddled with both superheroes and regular small-town citizens, why wouldn't some of them be gay? Because it has taken so long to acknowledge that, there's nothing to do now but celebrate that it's finally happening.

It helps that Alan, Northstar and Kevin are all monogamous, decent do-gooders. Imagine how far we'll have come when gay characters are so commonplace that they can be ubervillans. too. (Though James Moriarty did pretend to be gay in last year's season of "Sherlock.") Meanwhile, simply by being present, by becoming part of the vernacular of comic book culture, the new characters -- and the writers and artists behind them  -- are giving gay readers images to identify with. They're also sending straight readers the necessary message that gay people are no longer going to be invisible, even in the most fanciful, fictional, two-dimensional places. And though the Green Lantern may exist in an alternate universe, in this one, in his own mighty way, he's truly a hero.