Andy Cohen's an annoying golden retriever who craves fame. He'll get it because he knows why we watch reality TV 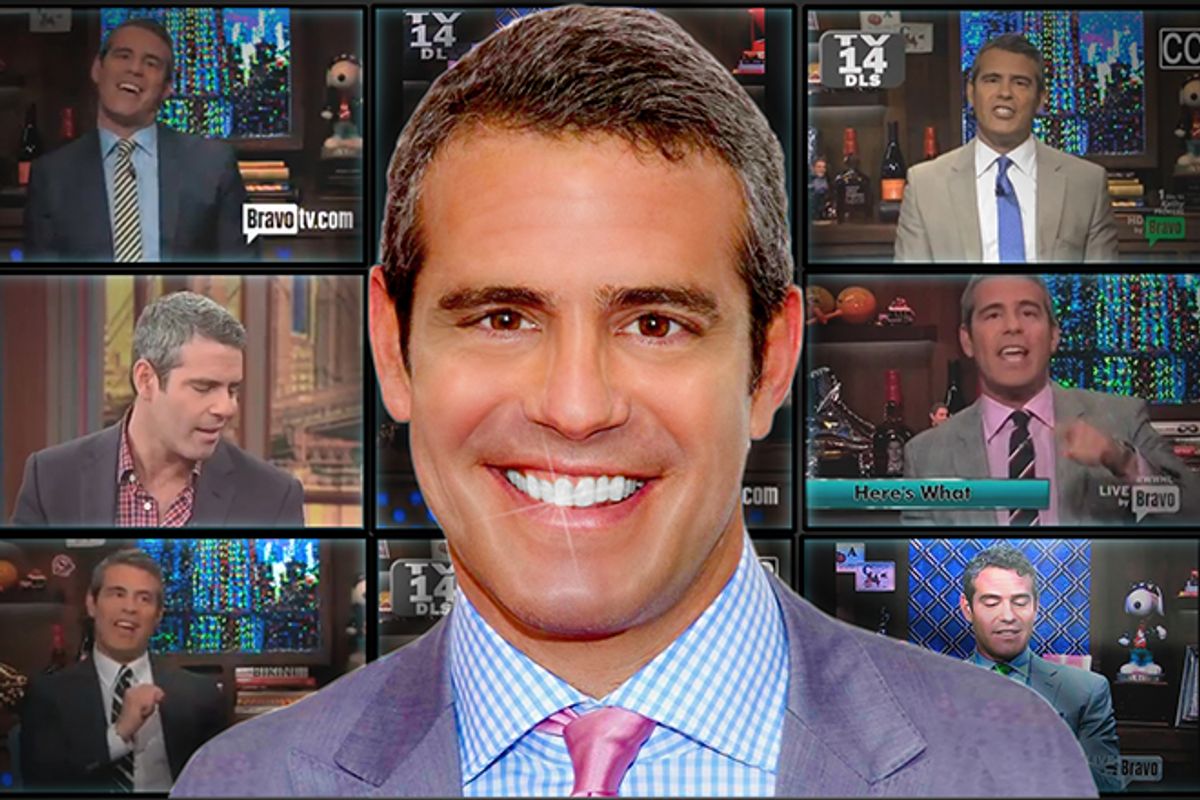 We all have cultural blind spots and, until recently, one of mine was Andy Cohen. You might think keeping Cohen, Bravo’s homegrown TV executive turned TV personality, out of sight would be difficult, given that he has spent the last few years running one of the most aggressive and successful make-me-famous campaigns in the land (behind only the Kardashians and Snooki). But this is exactly what kept him on my periphery. I knew enough — or I thought I did — to know I didn’t want to know more.

Cohen began overseeing production at Bravo in 2005, launching, among other series, the popular and ever-spawning “Real Housewives” franchise, of which he is an executive producer. Cohen started moderating the series’ deranged, no-weave-is-safe reunion specials, and in 2009 he parlayed that experience into his biweekly, low-budget, ramshackle late-night show “Watch What Happens Live.” This past January it expanded to five evenings a week. Cohen has also become one of our nation's go-to hosting ‘bots, the sort of well-groomed, energetic-if-anodyne MC who can professionally pace a Miss USA pageant, as Cohen did this past Sunday night.

A recent “Saturday Night Live” sketch skewered “WWHL” by suggesting that Cohen frequently ignores his guests — in the words of the skit, usually an “F List celebrity” and someone inexplicably famous, in this instance, Desmond Tutu — to go on and on about himself. Gawker has aptly taken to calling “WWHL” Andy Cohen’s “Half Hour Make Me Famous Hour.” “WWHL” is a product of a sort of Cheney-esque self-nepotism, in which Andy Cohen exerted his own undue influence to make himself a star. A man with a big say in programming decisions at Bravo decided to program himself a show, a perch from which he can promote both himself, his famous friends, and the stable of “bravolebrities” (Bravo’s own term) whose continued success also burnish his career.

These were the things that I knew about Andy Cohen, and, thus, was in no particular rush to know more. But Cohen is far along in the process of making himself unavoidable, and knowing a fifth season of “The Real Housewives of New York” was coming up (it started airing this past Monday), I began to watch “Watch What Happens Live.” I discovered what at least 1.2 million people —  the average audience size for the very successful “WWHL,” more viewers than either Conan or Chelsea Handler can claim — already know: There is something tremendously likable about Andy Cohen, a man so enthusiastic and open in his pursuit of recognizability he is like a golden retriever going after a ball. How can a guy who, on paper, is such an unctuous operator be so personable? What is the source of his appeal? Here’s my theory: Andy Cohen may be an expert reality-TV producer and competent reality-TV personality, but he is, most of all, a model reality-TV watcher.

In “Most Talkative,” Cohen’s recently published memoir, he says: “I’m not only a producer, host and boss. I’m also a super fan.” If these designations seem like they cannot coexist, well, having a multi-tracked perspective is the way most people watch reality TV. A guilty pleasure is a piece of entertainment you can and will disparage publicly, even as you enjoy it privately. Anyone who has ever made jokes about Snooki, Kim Richards, a Bachelorette or a Survivor, while religiously watching each week, knows that these two behaviors — the shit talking and the real affection — are not mutually exclusive. We can nitpick, castigate and scoff, even as we analyze, obsess and care. One can make endless fun of the Real Housewives, and also be unironically invested in the Real Housewives. “WWHL” is a safe space for the latter.

Cohen’s special skill has been to recognize, intrinsically, that this duality is not a contradiction — that perfectly smart people can care way too much about a bunch of plastic-faced ninnies. His huge success has come from treating it not as a cause for alarm, but something to celebrate. (And the fact that you can sub “Bravo” for Cohen in the above sentence indicates just why he has been such an ideal brand ambassador for the network.) On his show, reality television is not a blight, a plague, a bad habit or even that thing you are watching instead of doing something -- anything -- “better.” It is fascinating and fun and guilt-free.

A recent essay about "The Bachelor" on the Paris Review's website asked, “We’re not still supposed to feign embarrassment when we admit we watch trashy TV shows, are we?” We are. There may be no shame in admitting to watching the stuff, but there is still a shame in being really invested in the stuff. Reality TV stars are everywhere, all over our television and our magazines and our media, but they are also our national punch line. The sort of emotional connection people make with reality TV — the kind discussed in that Paris Review piece, or on display in Julie Klausner’s psychological astute, hilarious and fundamentally serious recaps of the "Real Housewives," or even in the hour-long chat you may or may not have had analyzing the mental health of various "Jersey Shore" cast members — is not part of the reality TV-viewing experience we talk about in public very often. Perhaps that’s because there really is something embarrassing about being manipulated into being heavily invested in the welfare of a bunch of people whose only life goal is to be famous — but that does not mean we are not heavily invested (or that this investment is not, in its own way, generous and sweet).

Andy Cohen, who has primed this sort of devotion more than just about anyone, and benefits from it more than anyone, also performs it more than anyone. On "WWHL," night after night, he could not be more engaged and fascinated with what all the bravolebrities coming across his stage have to say. Yes, this is total self-interest, the consummately professional behavior of a company man, but it also makes "WWHL" a forum for giving over to your interest in famous-for-no-reason people, and not your more knowing, sardonic feelings. (Cohen does an even more earnest and self-interested performance of these same qualities on the 'Housewives" reunion specials.) The only other variety show quite as consumed with reality TV as “WWHL” is the Joel McHale-hosted “The Soup,” which endlessly mocks reality TV in clip after ridiculous clip. “The Soup’s” attitude is sort of gallows, let’s laugh while American civilization crumbles, humor. “WWHL,” Cohen and Bravo’s position is, let’s not kid ourselves, this is paradise — and, please watch some more.

Almost every episode of “WWHL,” which is filmed in front of an audience of just 18, has a Bravo reality personality as a guest. Cohen peppers his guests with questions, most of which could only be meaningful to someone extremely familiar with their reality shows. (“What really happened with [Fill-in-the-blank-name of person on another Bravo reality show]”?) Even the not-explicitly Bravo-branded guests will be asked to discuss reality television. Sarah Jessica Parker has talked about the Housewives at length, and her wish that they would stop fighting. Dr. Oz has talked about which Housewife had the most obvious plastic surgery. “WWHL” tacitly assumes everyone who watches is as obsessed with Bravo’s reality TV programming as Andy Cohen is.

And there are a lot of those people. Cohen's audience tweets in questions as the show goes on, questions that are often specific and trashy, but not sentimental. Celebrities and bravolebrities alike are all quizzed on gossip, on the people they hate and like, who said what about whom, their sex lives and their plastic surgery. It’s one of the oddities of our celebrity culture that the more and more we see celebrities, the less and less interesting things they are asked to say. As a result of the new world order, wherein all media-trained famous people are hyper-aware that every comment they make will live on the Internet in perpetuity and most media outlets are overly concerned with pissing these celebrities off, interviews are well-mannered and polite. Late-night shows usually have a celebrity tell a charming, juice-less anecdote. In comparison, Cohen’s show and his audience are not quite so polite, though it never offends anyone. There is a segment called "Plead the fifth" in which Cohen asks celebrities nosy questions, one of which they are allowed to "plead the fifth" to. It seems that all the oversharing bravolebrities raise the bar on games like this: They will talk about anything, and the celebrities sitting next to them are expected to do the same. Cohen asks Adam Lambert to insult Clay Aiken, Beth Ditto to talk shit on Katy Perry, John Mayer to dish on his sex life, and Tina Fey to name the worst host on “SNL,” and they answer. On "WWHL," even real celebrities behave like reality TV stars, which ... well, what's the difference between them again? Score another one for Andy Cohen.

For a certain kind of person — the righteous and the few who have yet to succumb to the particular pull of a non-competition-based reality show, or are genuine hate watchers —  “WWHL” must seem, at best, like 30 minutes of watching a bunch of nobodies dressed in the emperor’s new clothes swilling cocktails and talking nonsense, while sitting next to the likes of Dan Rather. At worst, it looks like Cohen hosting a show that perpetuates the fame of Bravo’s employees while also advancing their delusions and his ambition. It is that. And it's also a good time.