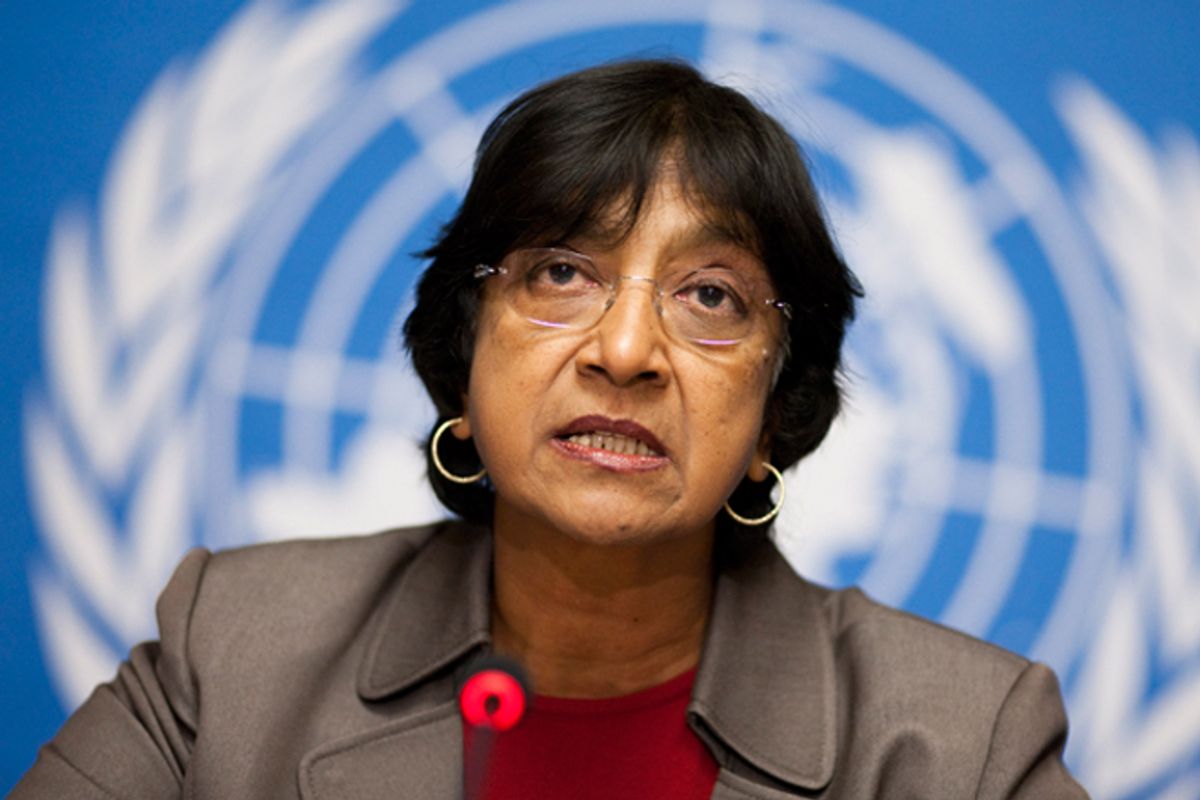 The U.N.'s human rights commissioner called for an investigation of civilian casualties in U.S. drone strikes in Pakistan yesterday, as Defense Secretary Leon Panetta said the aerial attacks would continue.

“Drone attacks do raise serious questions about compliance with international law,” the U.N.'s Navi Pillay told a news conference in Islamabad, according to AFP. It was the U.N.'s strongest condemnation yet of President Obama's remote control war that has killed four top al-Qaida commanders in recents months and scores of bystanders.

Chris Woods of the London-based Bureau of Investigative Journalism (TBIJ) reported this week that the CIA has resumed the practice of attacking rescuers who come to the aid of victims of the strikes as well as funeral goers who mourn them. The attacks were front-page news in Pakistan during Pillay's four-day visit to the country.

“I see the indiscriminate killings and injuries of civilians, in any circumstances, as human rights violations," she said.

Pillay said she had suggested to the Pakistani government officials that they invite the U.N. Special Rapporteur on Summary or Arbitrary Executions to investigate some of the incidents. She said U.N. Secretary General Ban Ki-moon has urged states to be “more transparent” about circumstances in which drone attacks are mounted.

“So therefore I stress the importance of investigating such cases and ensuring compensation and redress to the victims," she said.

As Pillay spoke, Panetta was visiting New Dehli where the Associated Press reported he "unapologetically dismissed suggestions that the strikes could violate Pakistan's sovereignty." Panetta didn't mention civilian casualties but he expressed frustration with Pakistan's refusal to cooperate in the U.S. war effort in the region, which has been triggered by unanimous public opposition to the drone war in Pakistani society.

"It's a complicated relationship: oftentimes frustrating, oftentimes difficult," Panetta said. "They have provided some cooperation. There are other times when frankly that cooperation is not there."

Two of the most recent U.S. attacks have killed civilians, according to TBIJ reporter Chris Woods who cited credible news accounts.

On Monday U.S. drones attacked rescuers in Waziristan in western Pakistan minutes after an initial strike, killing 16 people in total according to the BBC. On May 28, drones were also reported to have returned to the attack in Khassokhel near Mir Ali.

And on Sunday, a CIA drone strike targeted people gathered for funeral prayers of militant victims killed in an earlier attack. The intended Taliban targets appear to have survived, although up to ten people died. A mosque was also struck last week – possibly accidentally – killing at least three civilian worshippers.

The last reported attack on rescuers in Pakistan came on July 12, 2011, according to Woods. "Their cessation coincided with the departure of CIA Director Leon Panetta," he said.

The revival of the tactics – at a time of outspoken public attacks on the US drones campaign by the Pakistan government - appears to indicate a further deterioration of relations between the two countries.

And a deeper disregard for international law from the Obama White House.