Behind the Shell hoax

Yesterday, a fake video of an oil industry party went viral. I was there. Here's how it all went down 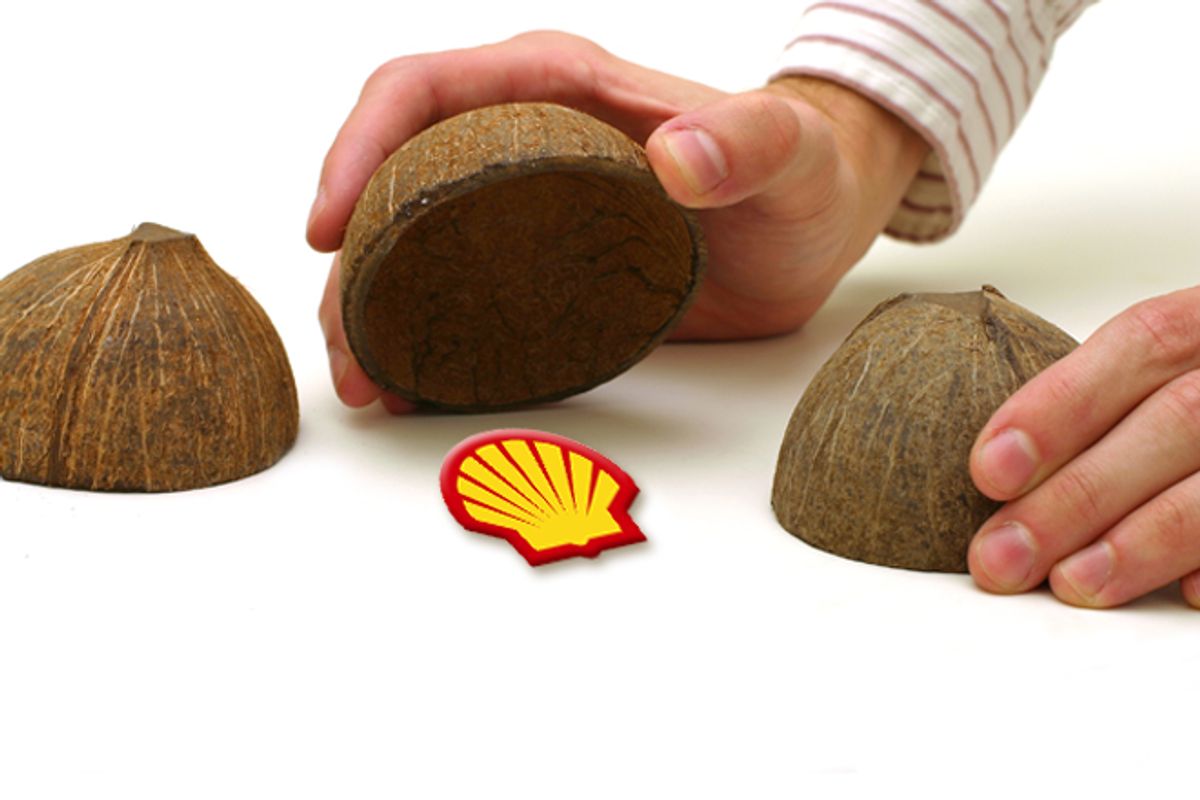 At a private party in Seattle’s Space Needle — ostensibly hosted by Shell to celebrate its new venture into Arctic drilling — an elderly man attempts to serve a drink from a model oil rig, erected next to an assortment of stuffed polar bears and a miniature iceberg bearing the Shell logo.

Suddenly, brown liquid comes jetting out, soaking a screaming woman. No one can shut down the flow; some try to staunch it with the polar bears. The person who took the video gets chased out and threatened.

Perhaps you’ve already seen the video, which spread rapidly across the Internet yesterday. It was, as the many news outlets that reported the story noted, an almost-too-perfect metaphor for the dangers of Arctic drilling, particularly given that the drilling rigs Shell plans to use this summer share a designer in common with the Deepwater Horizon rig that belched oil for three straight months in 2010. An unstoppable spill onto ice — even if just soda from a model rig — is exactly the kind of P.R. that Shell wouldn’t want.

Which makes sense, given that the video was the result of very elaborate — and very expensive — activist hoax.

Shell does plan to begin exploratory oil drilling in the Arctic this summer — the first company to do so, ever, thanks to the access provided by newly ice-free Arctic summers. But it did not plan the party, or even know it was happening. It did not create the website ArcticReady.com, complete with a kids’ section, to promote its Arctic drilling plans. It didn’t create or approve a series of tongue-in-cheek advertisements that cavalierly celebrate drilling. And, once reporters confirmed that the event was fake, the company did not release the angry press release that threatened legal action from Shell against the activists and any publications that reported the story.

All that was the work of activists associated with the Yes Labs and Greenpeace, who began collaborating on the project late last winter. It represented a major tactical shift for both groups — the Yes Men have crashed other corporate conferences and events, but never hosted an entirely fake one. And Greenpeace? “Ten years ago, we would have been hanging off the side of the Space Needle,” said James Turner, a media officer for Greenpeace USA. “Now we’re booking a room in it.”

Did you notice the woman on the left side of the video, wearing a gray suit and occasionally blocking the shot (oops)? That’s me. Curious to know what goes into conceptualizing and planning a prank as elaborate as this one, I volunteered, along with about 30 others, to come to the event and pretend to be extremely gung-ho about Arctic drilling.

The fake party took place on Wednesday night in a luxury banquet hall midway up Seattle’s Space Needle, over lobster, caviar and bourbon. The dress rehearsal took place the night before, over pizza in a tiny, dingy gallery.

About 30 people, all wearing our best attempts at corporate formalwear, had gathered, entering cautiously by twos or threes. Most of us had heard about the event by email, either straight from the Yes Men or forwarded by friends. Some had been specifically recruited in advance for key acting roles, among them Dorli Rainey, the 84-year-old activist who gained national fame after she was pepper-sprayed in the face at Occupy Seattle. In the hoax video, she’s the woman who’s sprayed in the face by the soda derrick. Paul Horiuchi, a retired actor and singer who’d once been a regular extra on the show "Northern Exposure," had been recruited to play the engineer of the Kulluk, one of the drilling rigs Shell plans to take to the Arctic this summer, currently moored in Seattle. In the video, he’s the man who sprays the soda. Horiuchi is 76; part of his role was to emphasize what the activists consider to be the unsafe age of the ship (according to the Seattle Times, the last well the Kulluk drilled was in 1993). He wore a tuxedo from his days in the Seattle Symphony Chorale. “I haven’t worn this in 10 years,” he said. “I didn’t know if it would still fit.”

The casting call had been only selectively specific — it asked for volunteers to play businesspeople, cheerleaders or bodybuilders, but the basic where, when and what of the action had been withheld. Most of us didn’t yet know what issue or corporation we’d be targeting.

Turner, of Greenpeace, introduced the action, explaining Shell’s upcoming exploratory drilling and why Greenpeace opposes it. “This is the beginning to the Arctic oil rush,” he said. “If they find oil this summer, there’s every chance Exxon and all the other majors will follow.” He noted the irony of drilling for oil in waters made passable by climate change. The group’s long-term goal is an international agreement, similar to the one that already exists for Antarctica, putting a moratorium on industrial development in the Arctic.

In the past, Greenpeace activists have boarded drilling ships, but in March Shell was granted an injunction preventing them from coming within a kilometer of its ships. (Greenpeace still plans to follow and monitor Shell’s ships from a distance.) So they looked for something new; the idea for the launch party emerged from a conversation with Andy Bichlbaum, of the Yes Men.

“Instead of attacking or critiquing Arctic drilling, we decided to celebrate it with the biggest party we could dream up — really take it to the logical extension,” explains Turner. “If these people truly are proud of what they’re planning to do, then let’s really celebrate it.”

This is one of the Yes Men’s signature tricks: pushing the bounds of extreme, uncomfortable honesty to see how much their targets will accept without reacting. The fake ads are almost believable — until you pause to think about them. For example: “With Arctic ice disappearing fast, polar bears today can swim hundreds of miles in search of food. We think they can do better. And so can we. At Shell, we’re exploring beyond our limits.” The PowerPoint, earnestly presented by actor Mike Mathieu in his role as a Shell vice president, dismissed the dangers of drilling and celebrated the profits to be made: “In life as in business, pragmatism trumps all. The dire consequences of climate change exist in the realm of possibility, but the oil that is up there is very real.”

And the script for the “debacle” — the planned malfunction of the drink-dispensing rig — was written to reinforce parallels with the Deepwater Horizon spill, with the actors passing responsibility to each other and saying things like, “This was subcontracted out! Shell has no direct relationship with this device.”

At the Space Needle, though, the actors ran out of time for much of the planned script. The rig was supposed to squirt on and on and on until finally the V.P. asked the audience to come help soak up the mess, offering stuffed seals, polar bears and orcas as handily absorbent. But after less than a minute, an employee of the Space Needle unplugged the device. (The actors plugged it back in and tried the “photo op” again a few minutes later.)

It was hard to tell who was a plant and who was an actual, invited member of the oil industry — we’d been instructed to stay in character at all times, chatting about the weather or the importance of easy access to oil or the short-sightedness of treehuggers. People in on the joke surely outnumbered those who weren’t, but certainly no one present raised concerns about the content of the speech or the ads. Finally, the actors and extras dispersed, then met up at a prearranged bar to compare notes, including plenty of speculation about who had been “real” and who was “one of us.” Bhama Roget, who played the party coordinator, was disappointed by the soda derrick’s somewhat lackluster spray. “I wanted that shit to be explosive! I wanted it to throw us to the ground.” Anomie Belle, a musician who teaches media literacy classes to kids and has studied culture jamming at the University of Washington, reflected, “Doing it is way cooler than studying it.”

In the end, the video went fairly viral, garnering more than 500,000 views on YouTube yesterday. A number of media outlets, from the Seattle Post-Intelligencer to Boing Boing, were taken in either by the video or by the threatening fake press release, then reported their error once the hoax was exposed. (The press release, asserting Shell’s plans to sue the pranksters, seems to have fooled more outlets than the original video.) In the process, most of them briefly discussed Shell’s drilling plans. As I write, people on Twitter are still sharing the links to the video or promotional website with lots of outrage and no awareness they’re fake.

The cost of the Space Needle, the ice sculpture, the open bar and all the rest? Yes Labs staffer Keil Troisi, who’s producing a documentary in which this prank will feature, put the price tag at tens of thousands of dollars, most of which came from Greenpeace. “Was it worth it?” I asked. “Oh, absolutely,” he replied. “You basically have to find ways to compel the media to cover important issues they’re not covering.” Troisi faces trial in Pennsylvania next week for taking part in a sit-in at Wells Fargo with Occupy Philly last fall.

Turner, of Greenpeace, sees more uses for this kind of tactic. “It’s fun rather than preachy,” he said. “We’re mastering corporate tools and using them effectively against corporate villains. It’s quite new, it’s fun to do, and it’s very effective.”

Edwin Beatty, a volunteer extra who made a very convincing Shell employee (fooling even fellow extras who’d seen him the night before), agreed. “Rational argument just doesn’t carry the day,” he said. “It should, but it doesn’t. We have to harness more artistic, creative and playful ways to make a point.”

“Plus, it’s cool to use code names,” said Troisi. He smiled. “I’m sure that’s really the reason we do this.”