As usual, the leading spokespeople for government policies are disguised as the nation's Adversarial Watchdog Press 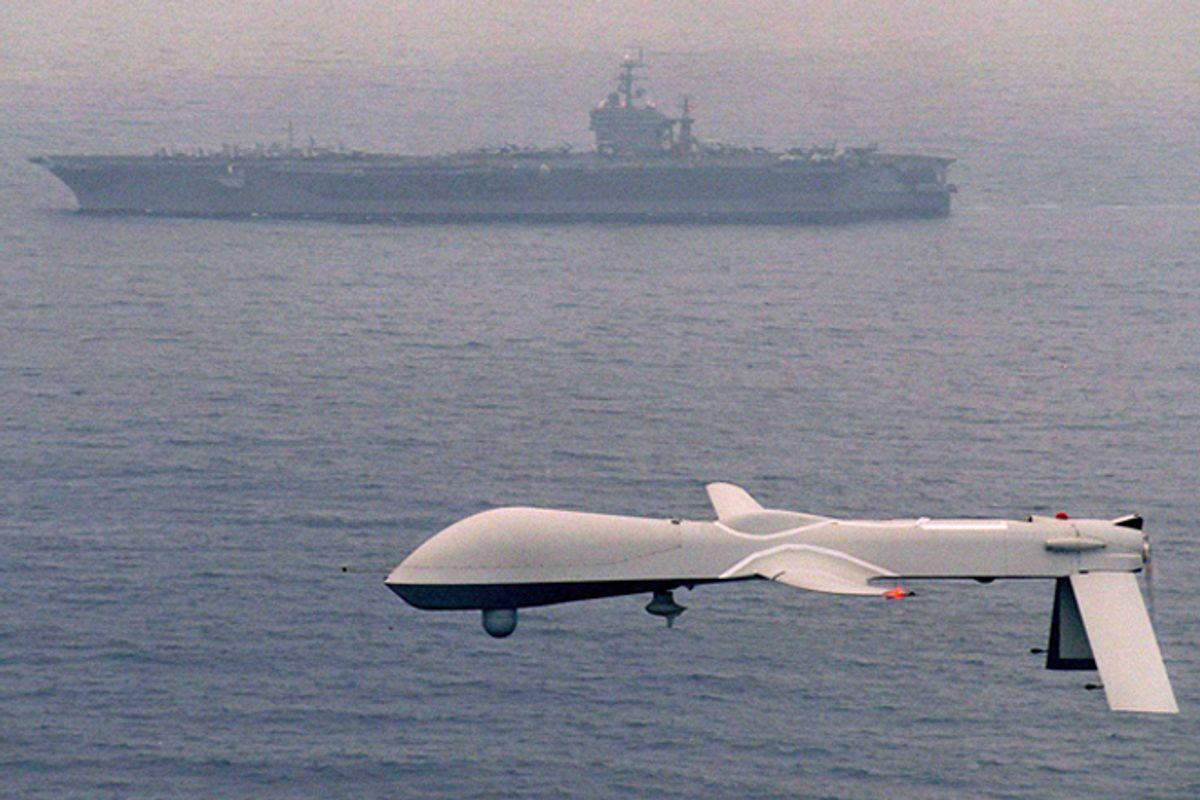 (1) I have an Op-Ed in The Guardian today on how the American media has been repeatedly and willingly coopted in the Obama administration's propagandistic abuse of its secrecy powers, with a focus on the recent high-profile, Obama-flattering national security scoops from The New York Times.

(2) In yesterday's Guardian, the ACLU's Jameel Jaffer and Nathan Wessler have a superb Op-Ed on how the Obama administration -- by simultaneously shielding its conduct from scrutiny through broad secrecy claims and then selectively leaking -- is deliberately distorting the public understanding of its drone attacks ("First the 'targeted killing' campaign, then the targeted propaganda campaign").

(3) This morning, I witnessed one of the most flagrant and repellent examples of rank government propaganda masquerading as objective journalism that I have ever seen, when I saw on Andrew Sullivan's blog this four-minute, sleek video produced by Newsweek and The Daily Beast, starring Newsweek reporter (and its former Managing Editor) Daniel Klaidman. It's literally painful to watch, but please do your best to endure the full four minutes, as I have a few points and questions about it afterward:

Did I exaggerate, or was that every bit as manipulative and repulsive as I suggested? How is it remotely justifiable -- using the standards of "objective journalism" that these media outlets incessantly invoke -- for Newsweek to produce a video that has little purpose other than to justify, glorify, and defend Obama's drone attacks on other countries? Is this not one of the most glaring examples ever demonstrating that "objective journalists" like Newsweek's Daniel Klaidman are barred from expressing opinions -- unless the opinion expressed is that the actions of the U.S. Government are justified and noble? That's why Chris Hedges was forced out of The New York Times for opposing the attack on Iraq while John Burns was venerated and made the chief war correspondent after he supported that attack: opinions are perfectly permissible from American journalists only to the extent that they defend official actions. In what conceivable way is it the proper role of Newsweek and its national security "reporters" to produce melodramatic agitprop which vigorously takes the U.S. Government's side in ongoing, highly divisive political controversies?

Then there's the content itself. Klaidman (now in the midst of promoting his new book based on ample access generously provided by Obama officials) pretends to speak on behalf of -- or to read the minds of -- drone opponents by claiming that what really motivates opposition is the weapon's unique "pinpoint" precision, its "almost supernatural effectiveness." Actually, what motivates opposition are totally different and very significant facts that Klaidman completely ignores because it would spoil the creepy and uplifting message of that video -- Embrace the drone. Love the drone. Become one with the drone -- little things like this ("Obama terror drones: CIA tactics in Pakistan include targeting rescuers and funerals"), and this ("The boy, 16, sitting with me in these photos was protesting against deadly US drone strikes... Three days later he was killed – by a US drone, says Jemima Khan"), and this ("Anwar al-Awlaki’s family speaks out against his [16-year-old American] son’s death in airstrike"), and this ("In Yemen, U.S. airstrikes breed anger, and sympathy for al-Qaeda"), and this (Obama administration "counts all military-age males in a strike zone as combatants").

Even worse, Klaidman -- all based on a single and highly aberrational interview excerpt -- has the audacity to insinuate that surviving relatives of America's Muslim drone victims are not just understanding of but grateful for the U.S. attacks. In reality, it's simply indisputable that drones (for obvious and completely understandable reasons) are a leading cause of rising anti-American hatred among would-be Terrorists and their enablers. His touching little story about how CIA drone operators waited for one of their targets to finish playing with his small child before blowing the father to bits is just too propagandistic for words (aren't our leaders so deeply humanitarian?). His blithe dismissal of concerns about illegality -- as the words of the Fifth Amendment's due process guarantee flashed on the screen -- is nothing but pure ignorance: someone please explain to him that an act of Congress like the AUMF cannot override Constitutional protections. His claim of few civilian deaths ignores the recent revelation that the U.S. "counts all military-age males in a strike zone as combatants." And the language that he uses -- "no responsible American President would allow Al Qaeda to plot attacks against The Homeland unmolested" -- sounds like a George Orwell parody of CIA literature.

Klaidman does allow that perhaps some greater transparency is necessary, but excessive secrecy is just a fraction of what makes these continuous, civilian-killing attacks so objectionable and alarming. But whatever else is true, he and Newsweek have just produced a government-defending video that relies on manipulative imagery and music, half-truths, and outright deceit -- all in service of justifying and even glorifying ongoing killings of civilians by the U.S. Government. How is that remotely Newsweek's function to perform?

(4) The media watchdog group FAIR suggested to me today that one of Newsweek's only competitors for the title of most rank media propaganda whitewashing of Obama's drone program is the 60 Minutes report from Lara Logan from 2009 last month.

(5) I did a short, 3-minute segment last night on Cenk Uygur's Current TV program on drone strikes (UPDATE: this video is now apparently private, so the segment can be seen here):

UPDATE: This commenter on Twitter makes a crucial point, and expresses it very well:

Meanwhile, the LA Times today reports that the CIA has been given expanded authority in recent weeks to carry out drone strikes in Pakistan. The article includes this: "Now, said a senior U.S. official, speaking on condition of anonymity in discussing sensitive issues, the administration's attitude is, 'What do we have to lose?'" That has everything: anonymity granted to U.S. officials to justify their actions, along with a sociopathic indifference to the civilians being killed by the U.S.

Finally, I should add that people I respect and who have read it insist that Klaidman's book is quite good; excerpts and discussions have been worthwhile. I'm not in any way suggesting otherwise by critiquing this repellent video.

UPDATE II: A smart emailer points out an insurmountable contradiction:

Isn’t the presumption that everyone in the so-called strike zone is a "militant" particularly egregious given past accusations that our enemies intentionally embed themselves in civilian populations? Haven’t we condemned our enemies in the past precisely because they’ve surrounded themselves with civilians? And now we’re justifying our crowd-killing strikes on the grounds that anyone close to a militant must himself be a militant?

Does anyone have an answer to that? How can someone like Klaidman mimic the claim of few civilian deaths without even acknowledging this radical re-definition of what a "civilian" is and then addressing all its disturbing implications?

UPDATE III: President Obama today angrily denied that the White House ever leaks classified information, and specifically denied doing so with the Obama-flattering stories about his "kill lists" and the cyber-attack on Iran's nuclear facilities; the President scorned the accusation that the White House was behind these leaks as "offensive" and "wrong." I wrote yesterday why that denial (when made by White House Press Secretary Jay Carney) is so implausible. Today, Jack Goldsmith marshals more evidence refuting it; please review what he has presented and decide for yourself if Obama's denials are credible. As I argued yesterday, the true test will be whether administration leakers who disclose classified information flattering to Obama are prosecuted on equal terms with whistleblowers who expose government corruption.