Pick of the week: Robert Pattinson plays a real monster

Pick of the week: The "Twilight" dreamboat drives a stake through Edward Cullen's heart in "Bel Ami" 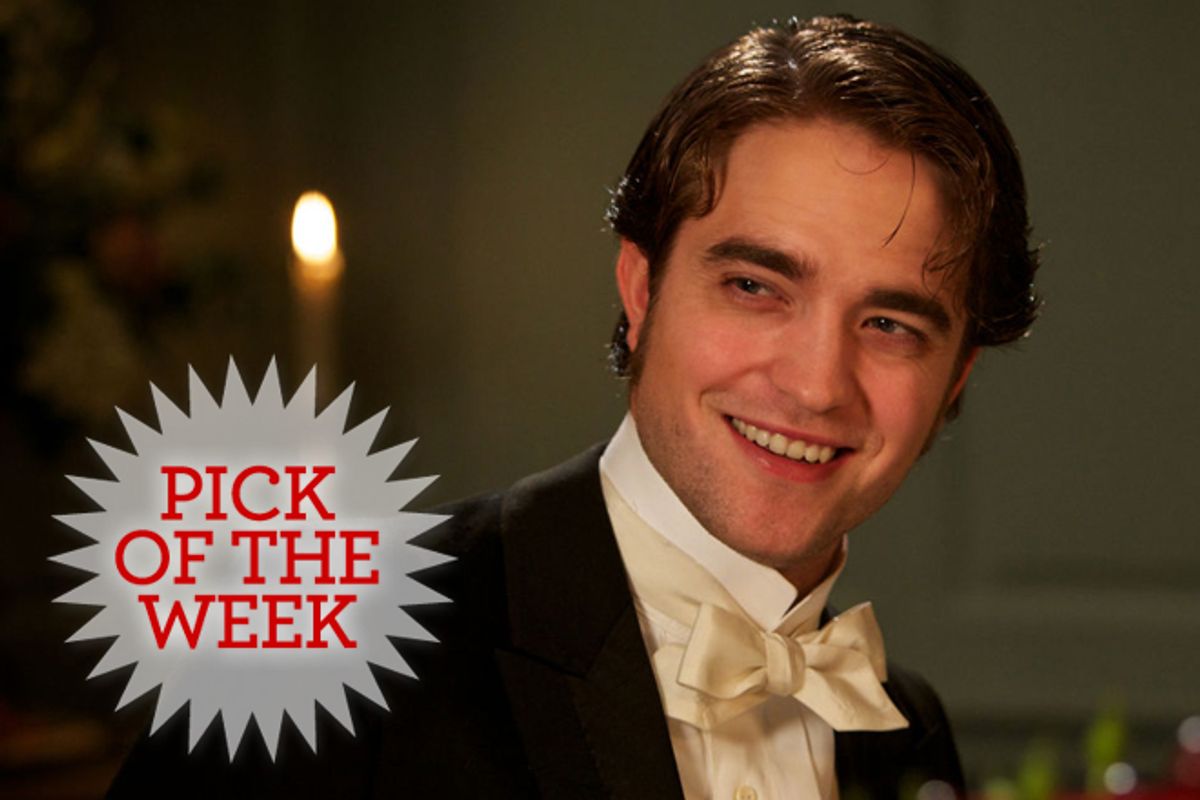 If Robert Pattinson had deliberately set out to alienate and bewilder his legions of "Twilight Saga" fans, he could hardly have done so more effectively than he does in "Bel Ami," an enjoyably soapy 19th-century costume drama with a crackling, female-centric cast that features Uma Thurman, Christina Ricci and Kristin Scott Thomas. British directing duo Declan Donnellan and Nick Ormerod's staging of the 1885 Guy de Maupassant novel (with a screenplay by Brit TV vet Rachel Bennette) isn't necessarily great cinema, but it's a witty, mean-spirited addition to the "Dangerous Liaisons" tradition, and provides an odd and pleasant surprise for anyone wondering how Pattinson will make use of his stardom.

In fact, I'm having a tough time resisting the idea that Georges Duroy, Pattinson's social-climbing war veteran in "Bel Ami," is meant as the diametrical opposite or photo-negative version of Edward Cullen from the "Twilight" films. Edward is, of course, a soulless undead creature who somehow isn't soulless; he has gone to the dark side without surrendering his humanity or his capacity for love. Georges is a human being who absorbs, and then inflicts, a kind of cruelty that vampires cannot imagine. Evil and soullessness are his survival strategies in a society that rewards callous manipulation, and he becomes more of a monster than Edward could ever be.

It's legitimate to dislike this film, of course; one of the things I appreciated about "Bel Ami," perhaps perversely, is how forcefully it resists easy enjoyment. But I think "Bel Ami" has been criticized in some quarters for being exactly what it sets out to be, a trashy, high-culture morality tale with an unpleasant hero and a bleak view of human relations. Pattinson plays Georges throughout as an unsophisticated country boy whose desires and appetites are almost animalistic. He can be a friendly, loyal dog or a scheming, hungry wolf, but the world of high-society Paris rapidly educates him about which of those personas is more conducive to advancement.

When we first meet Georges, he's a penniless ex-soldier who cadges a few coins and a dinner invitation off a rich former comrade, and then convinces a friendly hooker to give him a discount rate. Both actions are entirely innocent -- he's looking for work and connections, and he wants to get laid -- but after the fashion of the 19th-century novel, they sum up his character and his context. Everything he does after that is pretty much the same hustle, writ larger and larger, including the scene when he meets the prostitute again and pretends not to know her. He's only trying to protect his status, as he sees it; he's in the company of his married high-society mistress, Clotilde de Marelle (Ricci) and doesn't want her to think he's been consorting with streetwalkers.

Clotilde sees through his cover story and stalks out, but she forgives him eventually, and we feel pretty sure the hooker would too. Maupassant's "Bel Ami" belongs to the long tradition of satirical and/or cynical aristocratic romance that forms a major current in French literature, from Beaumarchais' "Marriage of Figaro" and Laclos' "Dangerous Liaisons" to Balzac's "Lost Illusions" and beyond. Such tales are full of innocence betrayed and beauty poisoned, but Maupassant was ahead of his time in observing that beauty and innocence could be male commodities as well as female. Georges is a striver from the provinces, not an upper-class dandy, but he lives entirely by his wits (which are not abundant) and his looks, like a combination of a Hollywood gigolo and a modern-day metrosexual. He learns what generations of young women have known: If you're pretty enough, you can get away with anything.

It's not that Georges has no heart. When he meets Madeleine Forestier (a witty, husky-voiced performance from Thurman), the brilliant wife of his aging military colleague, he is immediately smitten. A proto-feminist schemer and arguably the most appealing character in "Bel Ami," Madeleine makes clear that she will use Georges to help her exercise covert political power, as she uses the other men around her, but he cannot have her, or at least not yet. He may have Clotilde, if he likes -- "Her husband is so often away," Madeleine purrs -- and for that matter he can probably have Virginie Rousset (Scott Thomas), the prim, middle-aged wife of a powerful publisher (Colm Meaney).

Indeed he can, and he will. As Georges schemes and screws his way through Parisian society, his eyes glittering with lycanthropic energy, he discovers that he has no talent for journalism or politics, and that love only gets in the way of social advancement. He is certainly in love with Madeleine, and quite likely in love with Clotilde, but one of them betrays him and he betrays the other. By the time he gets to faithful, mousy Virginie -- another great Kristin Scott Thomas performance, as they all are -- his urge to seduce and humiliate her has grown distinctly sadistic, and is genuinely painful to watch.

If Edward Cullen has sacrificed everything for love, has literally gone against his nature and essence in the cause of romance, Georges Duroy sacrifices love for everything, and learns to embrace his predatory nature. One can certainly criticize "Bel Ami" on various levels; Donnellan and Ormerod are first-time filmmakers who don't manage the rapturous look and feeling of the better Merchant-Ivory productions, and the tone of the film sometimes feels overly arch and dry. But this Pattinson role, along with his performance as a billionaire New York banker in David Cronenberg's upcoming "Cosmopolis," makes clear that he won't spend the rest of his career reviving Edward. In fact, he seems devoted to driving a stake through his heart.