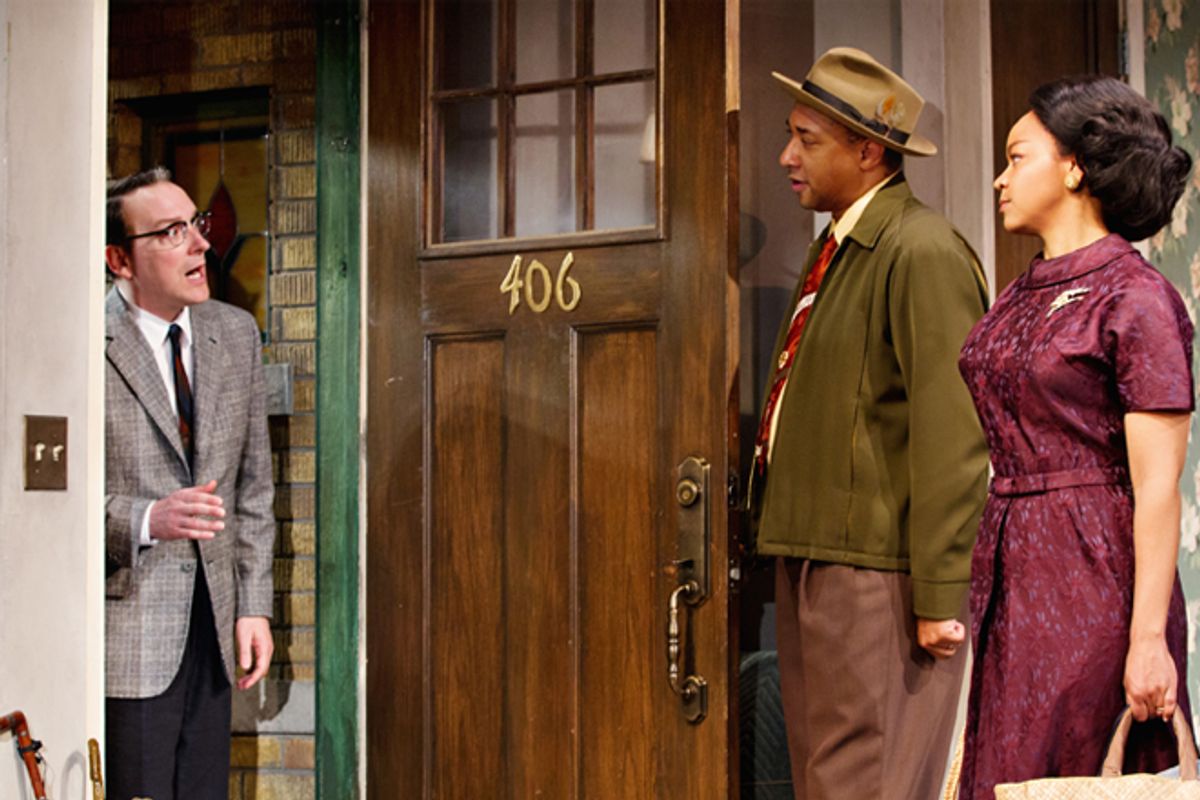 Bruce Norris’ play "Clybourne Park," which won the 2011 Pulitzer Prize for drama and last night’s Tony Award for best play, overflows with dirty words. None seem filthier in context, however, than “tribes,” “territory,” “property,” “society” and “community,” which are burdened with the intersecting stories of race and class in this country. "Clybourne Park" is about our moment in political and cultural history, and we don’t deserve an ovation.

The play is a sort of companion piece to Lorraine Hansberry’s seminal 1959 play “A Raisin in the Sun.” But instead of the hope, pride, honesty and love that give "Raisin" such enduring power, "Clybourne" is a biting satire of modern race relations, seen in 1959 (Act I) and 2009 (Act II), shortly after the nation’s first black president came to power.

In the first act of "Clybourne Park," which is understood as Chicago’s Lincoln Park, Karl Lindner (the only white character in "Raisin") is attempting to convince the white homeowners selling their house to the black family of "Raisin" to renege on the sale and preserve the neighborhood as a lily-white enclave. In the second act, a white couple are reintegrating and gentrifying a black neighborhood by buying the now-decrepit house, which they plan to tear down and replace with a McMansion.

Both acts feature white and black characters attempting to talk politely about their concerns for the neighborhood. In 1959, social and class restraints prevent real communication. In 2009, the constraints are gone, but polite communication quickly devolves into fractiousness; all the characters are educated and middle-class, but beneath the surface no one has any trust, interest, respect or liking for each other. The implication, to paraphrase Karl Lindner, is that we are all happiest in our own tribe, so it’s best not to mix with any other.

One role of theater is to hold a mirror up to society, and "Clybourne Park" shows us how, in the wake of ongoing financial insecurity and racial tension, Americans want to cling to their tribes. They’re all we have left. White men in particular haven’t yet adjusted to inexorable decline and are in no mood to share. The political establishment that represents them suggests that our economic disaster, coupled with what is perceived as social decline, is reason enough for their return to absolute control. The white woman who wants to buy the house in Act II of "Clybourne" is not a Republican, but nevertheless implies that with whites moving back and building McMansions, the neighborhood will be far more desirable (and eventually, unaffordable to all but the upper middle class).

The real-life GOP implies pretty much the same thing, that if they are in charge, fortunes will rise – at least for some. Those who had power, or feel they ought to, are seething at the rise of those they used to control. The party’s ethos effectively advocates the sort of segregation that is disintegrating in "A Raisin in the Sun" and in the first act of "Clybourne," by attempting to eradicate all federal aid and assistance to those who need it the most. So in the 2012 political arena, women and minorities – anyone who “knew their place” in 1959 -- are being shunted right back into that small place in an attempt to shrug off 50 years of history as an anachronistic hiccup.

The question of that history looms large in "Clybourne Park." The real argument in the play might be less about the physical property than about who owns what piece of history, and what will be allowed to stand or be forgotten. In 1959, Karl Lindner is de facto arguing for the preservation of history by maintaining the white neighborhood as it has always been. (They aren’t bigots, he’s quick to point out, because they let in a few Jews.)

In 2009, Lena, the great-niece and namesake of the matriarch in "A Raisin in the Sun," is fighting for the preservation of the neighborhood’s history by asking that the small house the white couple has bought not be razed. She’s arguably more in favor of maintaining the neighborhood’s character than Karl Lindner ever was, but she is also fighting to preserve the history of her family’s struggle, the history of the breaking barriers that both paved the way for the Civil Rights Act and gave rise to the Southern Strategy and the white flight that Karl Lindner predicted, correctly, would destroy neighborhoods.

Lena argues for the complexity and discomfort of history, even if this is not what she articulates, as well as its proud moments. The modern white couple buying the house, determined to rebuild both it and thus the neighborhood in their image, is effectively seeking to whitewash history. If the house that was so symbolic of so many hopes and dreams, as well as despair, no longer exists, then a lot of that history dies with it. Lena, who knows what that history has cost, won’t stand for it.

Whatever Bruce Norris feels about history, his play effectively looks backward in disgust, whereas Hansberry’s play looks forward in hope. By taking a magnificent piece of theater history and giving it such a cynical gloss, however based in reality it might be, Norris is almost telling Hansberry that her hope was audacious … and foolish.

"A Raisin in the Sun" premiered at a time when theater was at its zenith and costs were manageable enough that people of all classes regularly attended. Costs were also low enough that producers could mount challenging, thoughtful fare and take risks. No one can afford risks now on either the theatrical or political stage; both are increasingly enclaves of the wealthy. Each political party can build the mirrors that tell them and their acolytes whatever they want to hear. Like the angry characters in "Clybourne Park," no one actually hears anything and they certainly don’t listen.

"Clybourne Park" hints at the inherent dangers to society if we persist in not listening. But if a play keeps falling on the same set of ears, does anyone really hear it? There’s a big white elephant in the Broadway house that has nothing to do with Republicans. Ticket prices have skyrocketed and Broadway houses are filled not just with predominantly white audiences but affluent white audiences. The fare on Broadway struggles to be challenging, perceptive and meaningful, but producers are increasingly bound by market forces. Producers, like politicians, have to ensure that their message is comfortable and approachable enough that they’ll get the funding to speak it.

The incendiary language in "Clybourne Park" does not say anything of lasting impact. The white man and black woman each tell offensive racial jokes, which may be a grim indicator of equality, but it’s not what anyone marched or died for. "Clybourne Park" allows its audience to laugh comfortably at this image of not themselves, of course, but people they know, and then perhaps feel that if plays like this are a success, we’re no longer bound by our history. We can laugh and then walk away from the unpleasant people onstage. We can shower the play and thus ourselves in laurels and call it a day. The dream is not deferred: Look at Obama! Look at this middle-class black couple onstage who get to insult white people!

But if this is a reflection of who we are, and if we think we’re being let off the hook for further discussion, we are definitely heading back toward tribalism. Those who do not learn history are doomed to repeat it. "Clybourne Park" is not creating the sort of theatrical history that will entice and inspire. In pointing out what a short distance we’ve really come, it shows us what a long way we still need to go … if we could just start moving.

Sarah-Jane Stratford is the author of the historical vampire novels The Midnight Guardian and The Moonlight Brigade. Her short stories and articles have appeared in The Guardian, Guernica, and Women and Hollywood. She is currently working on a novel about espionage in World War I and a play about censorship and sedition.