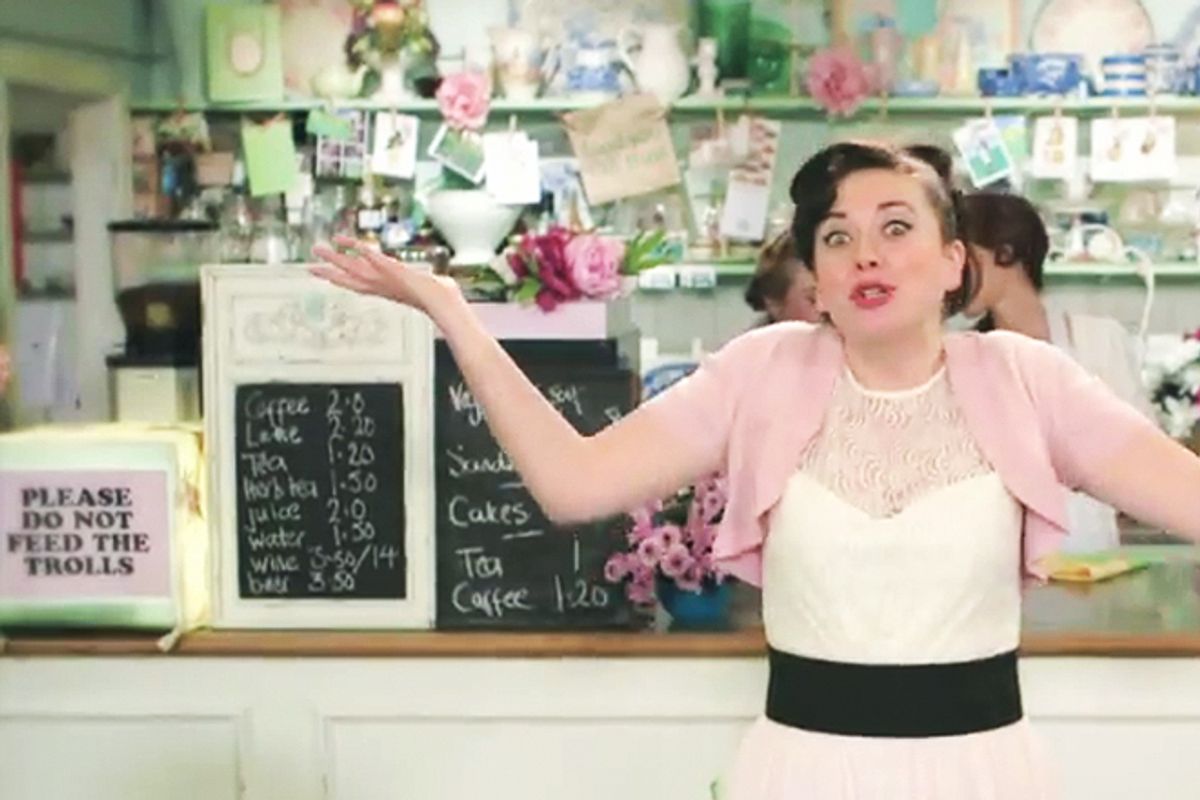 Oh no, thank you, Isabel Fay. The knowing laughter you've been hearing the past few days, ever since the British comic uploaded her musical tribute to Internet trolls titled "Thank You, Hater!" is just our way of saying, Oh yeah, we get it.

Fay, who cranks out comedy with the production company Clever Pie, is no stranger to vitriol -- nor are the hilarious bundle of chums she and producer Tom Hopgood enlisted for their tribute to "those hard-working Internet trolls." In just four-and-a-half incredibly satisfying, song-and-dance-filled minutes, Fay and company give props to those poor, maligned "sexually aggressive, racist, homophobic, misogynistic, cowardly, illiterate, waste of human skin" that make the comments sections of our lives so colorful.

With its cheeky delight in mocking the most horrible people never to move out of their parents' basements, no wonder the video's been burning a path through the Twitter feeds and Facebook walls of everyone who's ever dared to do anything online – and felt the wrath of the online lynch mob for it. A more expansive riff on the classic "It's Okay to Not Like Things," Stephen Fry promptly declared it "a masterpiece."

As someone who defines her resolution not to read the comments to her stories as the second healthiest thing she's ever done -- right after cancer treatment -- my only problem with the song is nailing down one favorite line. How could anyone choose between gems like "I'm really sure that if I met you, you probably wouldn't rape me like you promised that you would" and "You wished me cancer … and misspelled 'cancer'"? It's like she's read every response we ever got in Broadsheet! (What, no "Lighten up, slut"?)

Fay told the U.K.'s Telegraph this weekend that the genesis of the idea was, predictably, experience. "I've had some pretty awful things said to me," she said. "And I've ignored them all because you're meant to ignore the trolls." But after an especially vivid comment in response to a benign clip she'd posted about Easter, an idea took root. An idea that would articulate the suspicion many of us have that "Mr. Insightful" is posting his spew while "wanking like a gibbon."

Since debuting Friday, the clip's racked up international attention and, surprise, plenty of comments. Some are clearly lighthearted parodies of exactly the sort of trolling Fay mocks. Others, however, reveal the most stunning display of total lack of self-awareness since Lindsay Lohan called herself an "artist of many things." Seriously, read through some of the less-knowing responses to the video. These guys are amaaaaazing. There's the dude who has some ideas elsewhere about "stupid Mexicans" and that lady who "needs to shove her vagina lips back into the black hole in which it came from." There are the commenters whose YouTube feeds reveal their opinions that "I dislike faggots, girly people, boyscouts, kittens, emos, sober people and most of all, you." Isabel Fay couldn't have done it without you, fellas. And now that her little clip has taken her to a new level of fame and made her a hero to the troll-scorched multitudes, as she declared proudly to the Telegraph, she'd like to "thank them all – again." As would we all.