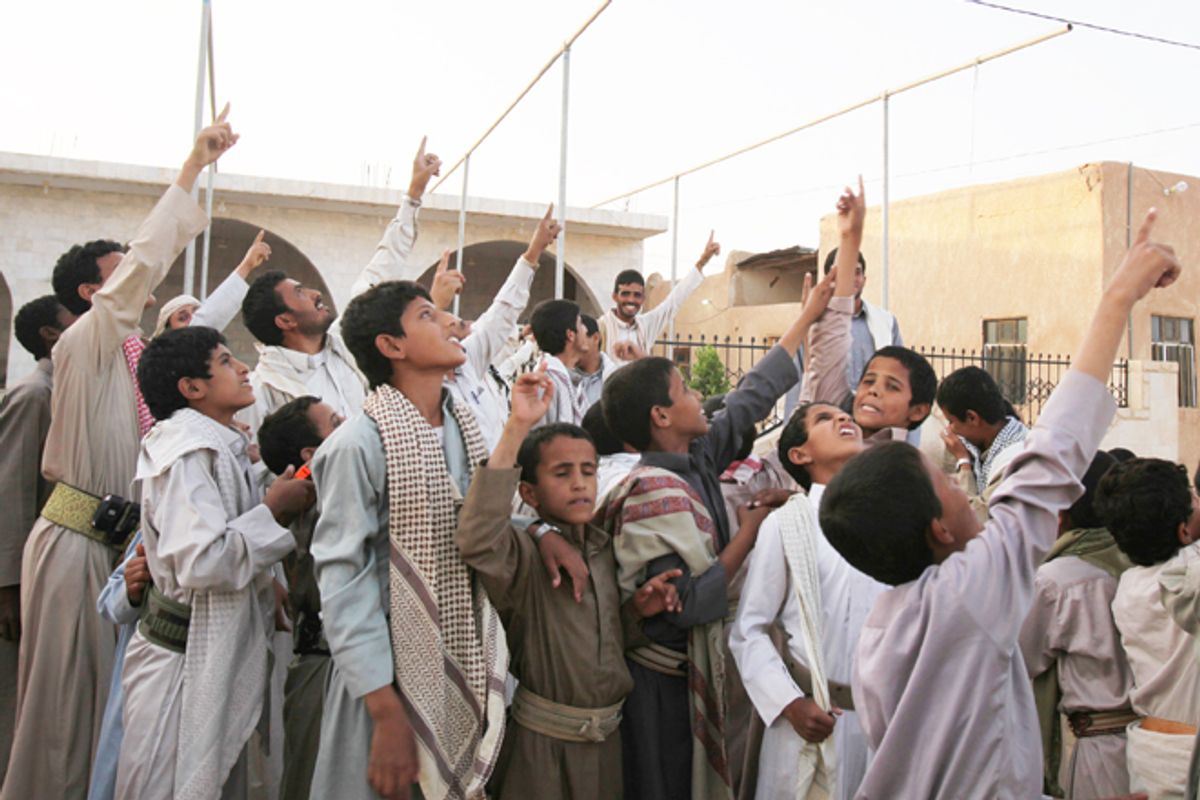 Members of the Abida tribe point to the sky as they look for drone aircraft over Wadi Abida, in the eastern Yemeni province of Maarib. (Reuters/Khaled Abdullah)
--

If the New York Times had run a story late in the spring of 2008 revealing that the Bush administration, including Karl Rove, met weekly to mull a "kill list" of suspected jihadists, one can be sure that congressional Democrats and liberals would be apoplectic. There might even be people marching in the streets. Now the antiwar left is quiescent.

Glenn Greenwald blames the authoritarian mind-set of the Washington policy class, while Chris Hedges blames the death of the effective liberal class, both of which are factors. But there's another less judgmental explanation. Liberal Americans, like conservatives, prefer instability (and randomized violence) overseas to a diminishing of their sense of security at home. Destabilization as security policy may be shortsighted but it is recognizably American.

Destabilization is certainly what President Obama has delivered. "Both Pakistan and Yemen are arguably less stable and more hostile to the United States than when Mr. Obama became president," noted Times reporters Jo Becker and Scott Shane in their "kill list" story. Yemen has been the country of origin for three of the most serious attempted attacks on U.S. civilian targets in recent years. Pakistan is the only nuclear state where Islamic fundamentalists compete for power, and its people are measurably more antagonistic toward America than they were when George W. Bush left office.

The metrics are dismal. The advent of the drone war in Yemen has coincided with the growth of al-Qaida there. When the Obama administration began the strikes in December 2009, al-Qaida had 200-300 members and controlled no territory. Now White House counterterrorism advisor John Brennan tells a group of New York cops that it has "more than 1,000" members. Gregory Johnsen, a journalist working on a book about the counterterror war in Yemen, says, "Al-Qaida now controls towns, administers courts, collects taxes, and generally acts like the government. It never had that before."

One key to al-Qaida's recovery has been tactical flexibility. During the Bush administration, a single U.S. drone strike in 2002 killed the leader of al-Qaida in Yemen and crippled the organization. The arrest of his two successors in 2003 effectively eliminated the group. Since then al-Qaida  has resurrected itself as Al-Qaida in Arabian Peninsula (AQAP), developed more decentralized leadership structure and replenished itself with up to a dozen former Guantanamo detainees, some of them Saudis. An organization that was once vulnerable to drone decapitation is invulnerable to that danger, and even able to recruit new followers.

“Every time the American attacks increase, they increase the rage of the Yemeni people, especially in al-Qaeda-controlled areas,” said Mohammed al-Ahmadi, legal coordinator for Karama, a local human rights group, to the Washington Post's Sudarsan Raghavan. “The drones are killing al-Qaeda leaders, but they are also turning them into heroes.” Raghavan continued:

On their Web sites, on their Facebook pages and in their videos, militants who had been focused on their fight against the Yemeni government now portray the war in the south as a jihad against the United States, which could attract more recruits and financing from across the Muslim world. Yemeni tribal Web sites are filled with al-Qaeda propaganda, including some that brag about killing Americans.

While AQAP retains the goal of striking U.S. targets, it has also learned from hard experience that attacks on civilians, especially Muslims, are not effective politically. In Yemen, AQAP targets foreign tourists and embassies or security officers of the pro-American Saleh government, which is now turning over power to a transitional government. "They don't blow up lots of Yemenis." says Lette Tayler of Human Rights Watch. "So there's not a lot of sympathy among the people for the U.S. counterterrorism mission. It's just not that important to them."

The Obama White House has retained the strategic goal of defeating al-Qaida but has displayed little tactical flexibility. Instead Obama and his advisors have  doubled down on aerial war (with some special forces types acting on the ground). The inevitable civilian casualties that follow drone attacks increase popular hostility to the United States.

"Compared to 2008, there is a much stronger sense of anger about the drone program in Yemen," says Tayler, who visited the country earlier this year. "Many Yemenis who supported the uprising against President Saleh say the U.S. only views them through the prism of its own security interest."

Of course, if the hostility of foreigners is the price of safety most Americans will gladly pay it. Obama's drone war is politically popular at home. Michael Cohen gloats in Foreign Policy that the "kill list" will not hurt President Obama politically because "Americans don't just like drone warfare -- they love it." He cites that Washington Post poll in February that found that 83 percent of Americans approve of Obama's drone policy, including 77 percent of liberal Democrats. But approval is not the same as love, and liberal support for Obama may well resemble conservative support for President Bush's attack on Iraq in 2003: broad, shallow and short-lived.

Only a fraction of all American liberals have been following the issue closely; they've got other things closer to home to worry about. It is unlikely that most of the president's liberal supporters even knew much about the drone war beyond what pollsters told them. It is only since Brennan's Wilson Center speech in late April that the drone war has been publicly acknowledged in any detail. In the absence of a terror attack on the U.S. territory, it is not surprising that the citizenry trusts the president's assurances that U.S. policy is keeping them safer.

Those claims are plausible at one level. Obama's ferocious extra-constitutional drone war probably has decreased the threat of an attack on American civilians, at least in the short term. Leaving aside its legality, the assassination of Anwar Awlaki last September eliminated the most persistent, creative and charismatic planner of attacks on targets in the U.S homeland.

But the political destabilization that ripples outward from targeted assassination has the same effect on America's friends that successful counterinsurgency campaigns have on its enemies. The politics of drone war drains the proverbial sea of America's ideological supporters and undermines the only basis for waging effective war: popular support of the people who feel threatened. In the Muslim world, it negates every other American message from democracy to rule of law, to women's rights.

Case in point, Pakistan, where Obama's drone war has disarmed the United States politically and delivered the country into a precarious, if not perilous situation, where our one-time ally is not far from becoming an enemy.

"Drone strikes were not a factor in Pakistan under the Bush administration," said Ali Hasan, director of Human Rights Watch in Pakistan. That changed when Obama quadrupled the numbers of strikes. "Now the dominant conversation is a deeply anti-American conversation."

Americans and Pakistanis who support the rule of law have been undermined.

"The strikes ensure that the U.S. has no credibility -- none at all -- on any issue related to human rights or political freedom," Hasan said in a phone interview. "All of those people in Pakistan who feel Taliban represent an existential threat to Pakistan itself -- who see the Taliban as human rights guilty of serious war crimes -- are now viewed as pro-American and hence suspect."

At the same time, the politics are murky. The Pakistani military is clearly complicit in the U.S. drone war, applauding the elimination of its rivals and providing intelligence to the Americans when useful — all while excoriating Washington in public forums. Pakistanis don't feel protected by the U.S. drone war but the dominant military acquiesces for its own benefit.

The moralistic liberal reaction to the drone war is slightly off the point strategically. Denunciations of the drone war's appalling level of civilian casualties are appropriate but they don't educate voters and Congress about the choices to come.

The biggest danger that the United States now faces as a result of the drone war is not an al-Qaida attack on U.S. civilians (though that remains a possibility) but a Pakistani defection from the U.S. war on the Taliban as the U.S. prepares to withdraw from Afghanistan in 2014. In Pakistani public discourse, Obama's America is fast replacing India as the country's leading enemy. When Defense Secretary Leon Panetta said in India last week that the United States was reaching the "limits of its patience" with Pakistan, the pro-American Dawn newspaper in Islamabad responded that the feeling was mutual:

The language the secretary has used, in the locations he has chosen to use it, only runs the risk of making Pakistan’s security establishment more intransigent and paranoid and will become fodder for right-wing forces propagating anti-India and anti-America opinions. All of which will only make it tougher for the Pakistani government to cooperate with the U.S.

In December, Pakistan's Army Chief of Staff Gen. Ashfaq Pervez Kayani let it be known that he had issued multiple directives to shoot down U.S. drones, which did not happen. In February, populist presidential contender Imran Kahn said his government would shoot down drones, a promise that doesn't seem to worry U.S. officials yet. Last week, Dr. Abdul Qadeer Khan, a national hero for founding Pakistan's nuclear program, said that U.S. drones could be shot down with a Hamza missile, a staple of Pakistan's air arsenal.

Americans may dismiss all of this as bluffing, and so far it has been. But we have seen many examples of "green on blue" violence where U.S.-trained Afghan soldiers have turned their guns on their putative American friends with deadly results.

The Obama administration seems to assume the Pakistanis, individually or collectively, will not do such a thing because it would jeopardize U.S. military aid. But with Panetta (and Congress) saying U.S. aid to Pakistan is already in jeopardy, that assumption is growing more dubious. Obama's drone war has made this dysfunctional relationship more dangerous. If the U.S. drone war is blue, Pakistan is green, and the possibilities for misunderstanding and betrayal are evident.