Until flaws in the euro are addressed, the crisis is likely to simmer on 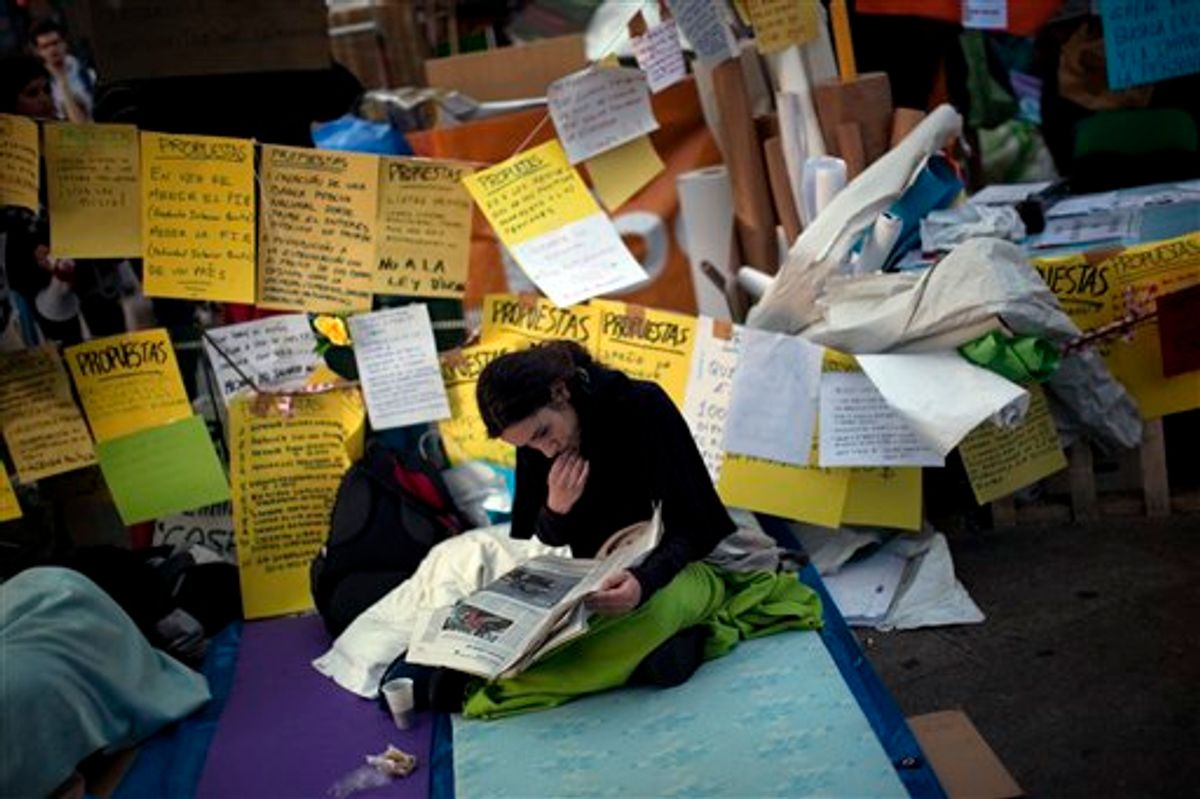 Spain's banks are in a world of trouble, as you've undoubtedly heard. They are strained by loans made over the course of a a building boom that went bust in 2008, two recessions in the last three years, and the highest unemployment rate among developed nations. Misguided austerity policies have only made things worse. Everybody is biting their fingernails, trying to figure out if the bailout Brussels recently concocted will work. Stocks are reacting in an up and down roller-coaster ride. Depositors are taking their money out of banks in the most vulnerable countries. The biggest fear is that if the bailout fails, the contagion will spread even further into Europe's core and eventually to the shores of the US itself.

That fear is justified.

The 100 billion euro proposed recapitalization for Spanish banks is not a small number. It would be like a $1.6 trillion capital injection into the U.S. banks if it was projected onto the scale of the U.S. economy. That is greater than everything that was done by the Fed and the Treasury to shore up the capital of U.S. financial institutions during the Great Crisis. Nonetheless, I judge that compared to the size of Spain’s non-financial private debt and the size of its bank run, this is a mere bandaid. And remember, even during the darkest days of the Great Recession of 2008/'09, the U.S. did not have a bank run.

Even though Spain's authorities have trumpeted the fact that the "assistance" (as Madrid's leaders laughingly keep calling their bailout) comes without conditions, it is worth recalling that the Spanish government is in the midst of a huge fiscal retrenchment over the next year. They are trying to take government spending as a percentage of GDP from a deficit to GDP ratio of 8.9 percent in 2011 to under 3 percent in 2013 at a time that GDP is forecast to decline by a further 1.7 percent. That's a bad thing. Econ 101 says that when you take spending power from the economy, a crisis is almost certain to worsen.

Like Ireland, Spain has faced declining real estate values as a result of the housing bust, and these declines are closely connected to banking losses due to things like foreclosure and bad loans. The key difference between Ireland and Spain is that Ireland has now experienced three years of wrenching austerity. In the case of Dublin, there is some degree of confidence that real estate prices have bottomed out. As Yanis Varoufakis notes, at least this gives the Irish some clarity, despite a poor outlook. Not so in Spain:

In Spain, by contrast, the downward dynamic of real estate prices is nowhere near a resting point. Some say that real estate has another 40% to lose before it reaches equilibrium. Which means that the banks’ black holes may be much larger than it seems.

What Spain teaches us is that the crisis of the euro is spreading into Europe's largest economies. Last month, the Spanish Prime Minister was denying there was a bank crisis in his country. The Greeks said much the same thing over a year ago. Likewise, the Irish authorities promised an end to that country's problems -- before they sold their people down the river to the austerity hawks now running economic policy in Brussels, particularly the Germans. The Germans, you see, didn't want to force losses on private unsecured bank bond holders, which included German pension and insurance funds.

So today we have yet anther leader, Spanish Prime Minister Rajoy, who is telling his country that the crisis is "resolved" and the euro's credibility restored. It's like a broken record. Given the response of the markets, these assurances are clearly running a bit thin.

The heart of the real crisis in the Eurozone is the euro itself. Until the deep flaws in the design of the European Monetary Union (EMU) are addressed, the crisis will simmer on. The EU leadership can do one of two things: either establish a credible and functional federal fiscal authority and allow it to run deficits that are commensurate with the gaps in private sector spending now existing in the zone -- or abandon the currency union altogether.

Right now, the first option would require such an authority to run deficits continuously for many years into the future, which were well in excess of the rules of the Stability and Growth Pact (an agreement among the 27 member states of the European Union developed in the '90s). Those harmful rules should be abandoned and a growth strategy with direct job creation programs (especially for youth) prioritized.

Unfortunately, the EU elites are pushing through a new fiscal compact which is an even harsher version of the Pact. Which means that they are not even close to understanding the reality and what is required.

In last Saturday's Financial Times, authors Niall Ferguson and Nouriel Roubini published an article titled “Is it one minute to midnight in Europe?” They discussed the bank run that has been happening as depositors take their money out of troubled European banks:

On a recent visit to Barcelona, one of us was repeatedly asked if it was safe to leave money in a Spanish bank. This kind of process is potentially explosive. What today is a leisurely 'bank jog' could easily become a sprint for the exits. In the event of a Greek exit, rational people would ask: who is next?

Ferguson and Roubini report that Greeks have withdrawn more than 700 million euro from their banks in the past month. That's what we might call a "jog." Charles Dallara, managing director of the Institute for International Finance, tells us there was more than 170 billion of euro lender of last resort financing of the Greek banks by the European Central Bank (ECB) through the end of April. Given the fact that Greece’s money supply has contracted by perhaps 50 billion euros, the implied total deposit run might be well in excess of 200 billion euros. In plain English, that sounds more like a sprint toward the exits.

Amazingly, Ferguson and Roubini are being fooled about the extent of the Greek deposit run because they are looking at the money supply data, which actually tells you nothing about the extent of the bank run. Why is that? Because when a Spanish depositor takes his or her money out of a local bank in, say, Barcelona, and re-deposits it down the street with a local German banking subsidiary, it doesn't change the money supply data. Therefore it masks the amount of deposits fleeing the Spanish banking system. The true magnitude of the run can only been understood by closely examining the ECB's so-called "Target 2" payments system (through which the national central banks of member states provide payment and settlement services for intra/euro area transactions) and the ECB's so-called "Emergency Liquidity Assistance" (ELA). Both of these have been growing exponentially.

Just this past week alone, there is Target 2 data reporting a 68.4 billion euro ECB injection of funds into Spain. That is more than half of the now-much discussed 100 billion euro Spain bank bailout. That also sounds like a sprint for the exits.

Therefore, we are not one minute to midnight in Europe. At these rates of deposit flight, it is midnight.

The bells are chiming, but like the deaf Quasimodo, nobody in Europe appears able to hear. If policy-makers continue fail Econ 101, the problems in the banking system will spread across the entire European financial sector, hitting fragile banking systems in places like Italy first, and then potentially poisoning those in healthier countries like Germany and France. That, in turn, would cause banks to cease lending, and spark more economic pain around the world. The United States would certainly not be immune, and during a time of halting recovery, that could throw us right back into recession.