"Dallas": How the Ewings inspired the Kardashians 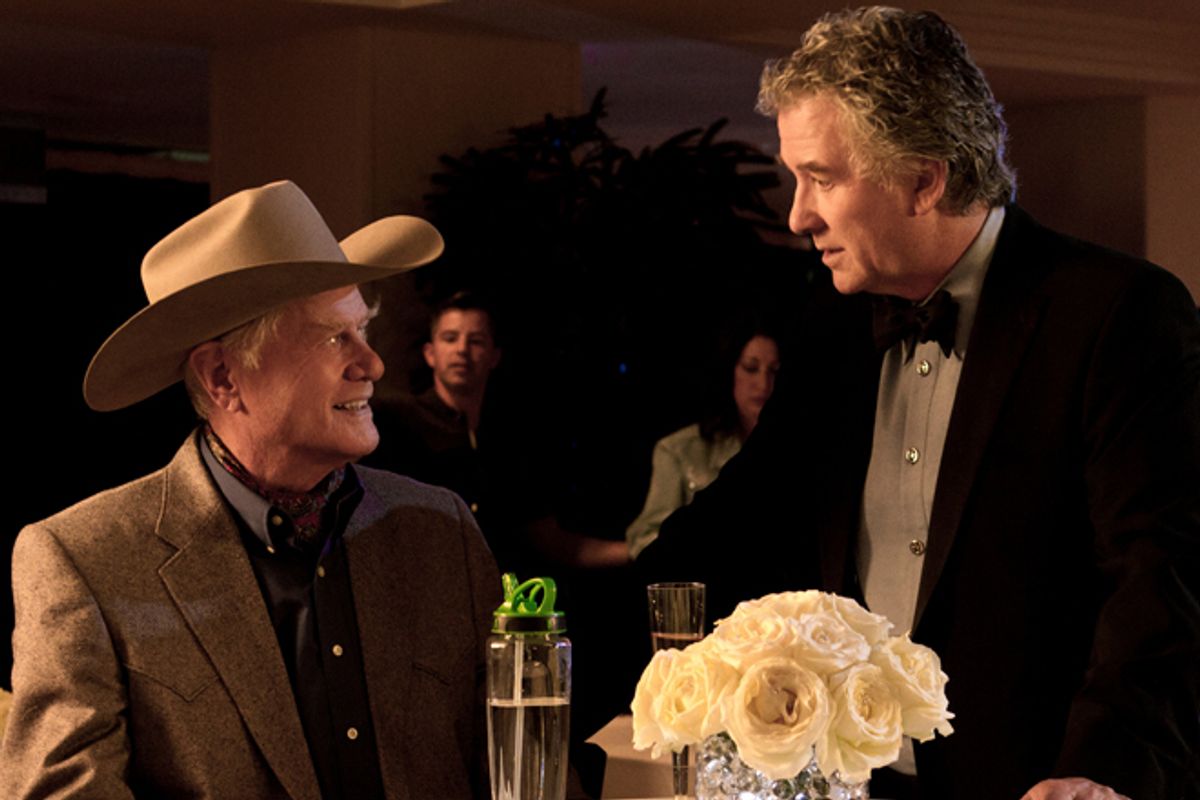 TNT’s splashy new reboot of the '80s soap opera “Dallas” put me in mind of Neanderthals, and not just because one of its cast members boasts a very robust set of sculpted eyebrows. Two years ago scientists confirmed that, thanks to inter-species mating, most humans contain Neanderthal DNA. We may laugh at our cave-dwelling ancestors in Geico commercials, but they’re lurking inside all of us, accounting for at least 1 to 4 percent of our genetic material. The original “Dallas” is also a member of a now largely decimated species that’s regularly teased for being unintelligent: the flashy, over-the-top, nighttime soap opera. Since the heyday of “Dallas” and "Dynasty,” this form of melodrama has been outflanked and outwatched by sleeker, smarter dramas that have co-opted its love of antiheroes and also by more economical reality shows that have co-opted its frivolity. Though we may laugh at “Dallas’” sequins, plot twists and swimming pool fights, its influence is still all over our televisions.

But if neither Neanderthals nor “Dallas” get the respect they deserve, it would still be pretty strange to find a Neanderthal in one’s living room— and it’s pretty strange to find a newfangled “Dallas” in there as well (if not quite the-plot-of-“Encino Man”-playing-out-at-your-house-level strange). The new “Dallas” picks up 20 years after the original series finished, takes some OG “Dallas” cast members, mixes them in with a bunch of younger catalog models, and sets them to fighting about oil rights. For the old fans, there are Larry Hagman, Linda Gray and Patrick Duffy; references to "Pamela" (Victoria Principal did not sign on to join the new series); the theme song; lots of sneering about being a “Ewing”; and sullied nostalgia. For new audiences, there are attractive young people scheming with their shirts off. (Jesse Metcalfe plays Bobby Ewing’s adopted son Christopher and all that needs to be said about him as an actor can be summed up by the following: I have seen him with at least three different chest-hair cuts.)

The new “Dallas” may look more contemporary than the original, but that’s just a trick of the film stock: The new “Dallas” is old-fashioned in ways that the first was not. To the best of its ability, the original “Dallas” was modern, not to mention playful and salacious, whereas the new “Dallas” is a flat reanimation of an out-of-date format. It’s a Neanderthal — one with a chest wax and a cowboy hat — come to life, mixing it up in a world where it’s just about extinct.

The original “Dallas” ran from 1978 to 1991. For much of the early '80s, it was the most watched show in America, one of the frothy soap operas then dominating prime and daytime TV. Nighttime soap operas still exist — there’s “Revenge" and the recently ended “Desperate Housewives” and "One Tree Hill" — but their peak has passed. Daytime soaps are being canceled and their nighttime brethren have gotten gussied up and turned into quality television (“Mad Men” and "Downton Abbey” both come with prestige period-settings), camped up and turned into comedy (compared to the self-serious new “Dallas,” the unintentional hilarity of this promo ad excepted, “Desperate Housewives” could be slapstick), or tamped down and turned into a procedural (“Grey’s Anatomy” is a soap that can be syndicated).

But if the original “Dallas’” format is out of fashion, its content is not. “Dallas” was about a macho Texas culture, full of sharky businessmen given to fistfights, a kind of cartoonish, tux-wearing forerunner of one of the patriarchal subcultures that have come to so totally dominate “serious” television. Sure, the most egregious violence was often meted out by unhinged women, and the fights usually ended up in the pool, but it’s easy to imagine Starz, FX or AMC picking up a drama set in the oil fields of Texas. (Fox even did this, with the quickly canceled, but excellent “Lone Star.")

It’s even easier to imagine someone building a show around a character like J.R. Ewing, one of the ur-antiheroes. J.R wasn’t supposed to be the star of "Dallas," but he took it over one scheme and razor-sharp insult at a time, demonstrating that audiences can care more about the bad guy than the good one -- if he’s more dynamic. J.R. is not an antihero in quite the Tony Soprano, Walter White mold — we’re supposed to love to hate him, not feel conflicted to love him — but he is their predecessor, the amoral guy at the center of things, entertaining the hell out of us.

And J.R.’s smug self-confidence, shameless self-interest, and lack of scruples has made it onto other TV shows as well. Reality TV series scratch the itch that soaps used to, showcasing a bunch of attractively trashy looking folks gossiping, sniping and scheming about each other and occasionally throwing over a table or having a fight in insulated settings where they always seem to be running into each other. Those strange folks who set out to be “reality TV villains” all seem to have studied, if not quite mastered, the J.R. Ewing handbook. And if there is any family that has as much invested in its name as the Ewings, it could only be the Kardashians.

This is all to say that “Dallas,” ridiculous Dallas, the show that had one entire season turn out to be a dream, still matters. And yet the new “Dallas” could not feel more irrelevant. It’s a straight down the line uninspired, dull, humorless soap opera that mimics the original without taking any of the interesting things from it — a specific setting, a complicated leading man, a sense of fun — that so many other shows on TV have.

The new trio of cast members, locked in a love triangle, are J.R.’s scheming son John Ross (Josh Henderson), Bobby Ewing’s well-meaning son Christopher, and the hardworking girl they both love (a too skinny Jordana Brewster). John Ross and Christopher have both been programmed to be like their fathers — one's the plot-driving, entertaining bad guy, the other the mistake-prone, fundamentally good one; or, one's the oil digger and the other is developing the relatively “green” technology of methane fracking — but they don’t come close.

This is especially unfortunate in John Ross, who as the next-generation villain, is supposed to be the keeper of the "Reasons to Watch 'Dallas’” flame. As J.R., Larry Hagman was an affable, showboating, charismatic dick. His villainy was showmanship, and so he crafted his insults, took pride in them, wanted everyone to hear them. (On the new “Dallas,” there’s an occasional flash of this, but the 80-year-old Hagman does not have that much screen time.) J.R. may have schemed in private, but he wanted it to be known. He was an extrovert, a people person without much respect for people. John Ross also schemes, but angstily, tediously, and with none of J.R.’s eviscerating bonhomie. He's all introvert, strong, silent and boring.