"Rock of Ages": The joys of total fakeness 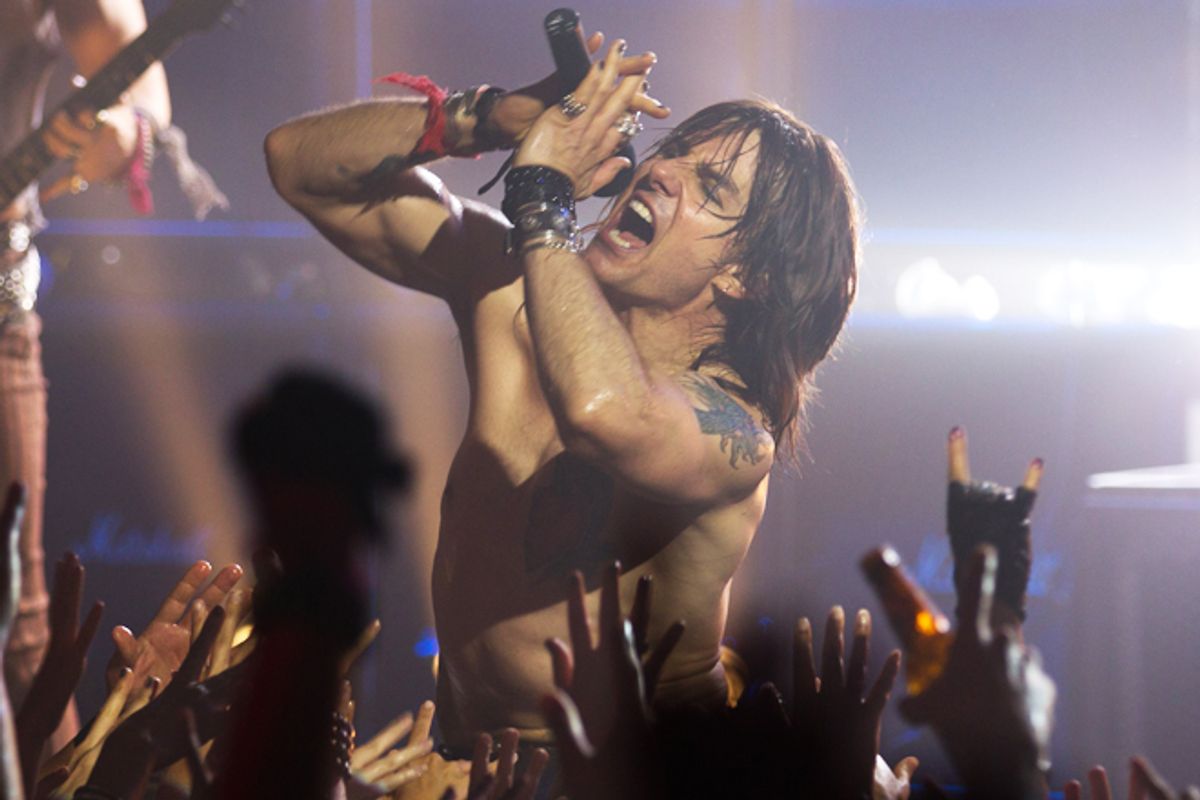 If it's possible for a cultural product to completely lack either authenticity or sincerity, and yet possess a joyful innocence, that product is the jukebox musical "Rock of Ages," a Broadway hit that now reaches the big screen as a ludicrous summer entertainment from director and choreographer Adam Shankman. Now, I understand that some may find the premise of this picture thoroughly obnoxious: An odd collection of movie stars and pop icons -- from Alec Baldwin to Russell Brand, and from Catherine Zeta-Jones to Mary J. Blige to the utterly uncanny Tom Cruise -- hoofing, hooting and generally goofballing their way through a bunch of production numbers built around a random assortment of pop-rock hits from the '70s and '80s. I mean, it is obnoxious, not to mention thoroughly artificial (and hilarious). But if your objections are based on the fact that "Rock of Ages" seems unrealistic and phony -- that it doesn't paint an accurate picture of Los Angeles in the 1980s or rock 'n' roll or much of anything else -- then you're seriously barking up the wrong tree.

"Rock of Ages" is an effulgent celebration of fakeness. It isn't trying to be real; it's trying to be faker than any fake thing has ever been before. Compared to this fake musical set in a fake version of the past that spins a ridiculously fake narrative of pop-culture history, "Mamma Mia" (the last jukebox musical to be vilified by critics and embraced by the public) is pretty much a mumblecore movie. "Rock of Ages" is so remarkably fake it's almost ur-fake or meta-fake; you can watch the globs of trans fats congealing on its preternaturally bright surfaces as it cools. This movie could hardly seem more weirdly artificial if it had been jointly hatched by David Lynch and John Waters, and raised in a lab on a steady diet of Foreigner hits and original Broadway-cast recordings.

I'm not claiming this movie is good for you, Lord knows. It's a little bit like eating a Happy Meal at 4:30 in the morning after a long night of Jägermeister and nitrous oxide. But not to put too fine a point on it, if you ain't lookin' for nothin' but a good time, why should you resist? Some people who claim to understand the public appetite smell an expensive flop here, and that well may be. But I'm here to tell you that this movie is almost too weird to be believed, and that if you share even a fraction of my taste for perversity you should check it out.

After its fashion, "Rock of Ages" -- the screenplay is by Justin Theroux, Allan Loeb and Chris D'Arienzo, writer of the Broadway show -- is in fact true to its own tradition, one that's a little difficult to describe. Let's call it the tradition of deliberately misunderstanding cultural conflict, of reducing it to cliché and fantasy in order to fit it into a let's-put-on-a-show musical. You should never underestimate the power of stupid movies to give people stupid ideas, but I certainly hope no one comes away from "Rock of Ages" with the idea that the music of Journey and Bon Jovi and Pat Benatar was ever remotely controversial, or represented any kind of subculture (other than the subculture called "people who sometimes turned on the car radio"). One thing that occurred to me while I was watching it is that "Rock of Ages" portrays the L.A. rock scene of 1987 with the same degree of accuracy we would have seen in an exploitative TV movie made in 1987. It bears the same relationship to reality that "Miami Vice" bore to Miami, or to vice.

I resisted "Rock of Ages" manfully -- for about 30 seconds. I was still OK when Oklahoma small-town girl Sherrie (Julianne Hough, star of the recent "Footloose" remake) busts out into a rendition of Night Ranger's "Sister Christian" during her Greyhound ride to L.A. I mean, I chortled, but I was OK. But then the African-American bus driver joins her, in a mellow baritone, and then it's everybody else on the bus: "Where you goin', what you lookin' for/ You know those boys don't wanna play no more/ With you ..." And I was swept away, into the vertiginous vortex of irresistible idiocy. Mind you, Sherrie and her overly scrubbed wannabe-rock-star paramour, Drew (Diego Boneta), are nothing more than bland plot contrivances to get us from one bizarre production number to the next. Mind you, they have their moments, especially during the traditional second-act setback, after they've split up and moved on to new careers: Sherrie as a pole dancer, doing PG-13 stripper routines and medleys of "Shadows of the Night" and "Harden My Heart" under the protection of Mary J. Blige; and Drew as a member of a pseudo-hip-hop boy band called The Z-Boyeezz ("two E's, two Z's and double the flava").

Before they end up in those dire straits -- ha! -- Drew and Sherrie work at a legendary Sunset Strip spot called the Bourbon Room, presided over by the grizzled, beefy Dennis (mildly underplayed by Alec Baldwin) and his skinny, Cockney rocker partner Lonny (Russell Brand, who of course can underplay nothing). In a turn of events that's very 2012 and not 1980s at all, Dennis and Lonny gradually become aware of their upwelling tender feelings for each other, a turn of events which Shankman (who also made the 2007 reboot of "Hairspray") simultaneously plays for laughs and as an opportunity for the audience to express its tolerance. It's one-stop shopping for all your homophobic and/or gay-friendly needs, although I'm not sure anyone could resist Baldwin and Brand's romantic montage-duet cover of "Can't Fight This Feeling."

Catherine Zeta-Jones, who's both a trooper and a trouper, plays the paradigmatic prudish villainess required of all musicals, the pink-suited mayor's wife who's on a morals-and-values campaign to wipe out sin on the Sunset Strip. But as we grasp during her delirious bump-and-grind rendition of "Hit Me With Your Best Shot" -- and who could have imagined that song could be made more vulgar? -- Zeta-Jones' character has a not-very-veiled private agenda involving Stacee Jaxx, the reclusive rock icon who will be playing one night only at the Bourbon Room, in order to rescue Dennis and Lonny from bankruptcy. That brings us to the haunted, hollow-eyed, snake-slithery performance of Tom Cruise, which is what blows this movie all to hell, sort of in a good way and sort of not.

When we first meet Stacee Jaxx, he's asleep under a pile of naked groupies, wearing a cowboy hat and some kind of bejeweled codpiece, with tattoos of six-shooters pointing at his dong. He's in a dressing room with an enormous hot tub, a limitless supply of Scotch and a monkey whose name is "Hey Man." Apparently nobody told Cruise to play Stacee in the bright, presentational style that characterizes the rest of this movie, or possibly that isn't something he can do. In any case, this is one of the greatest physical and emotional performances of his career, capturing this ridiculous creature in the middle of a ridiculous situation as a figure of tremendous, existential loneliness and pain. I think Alonso Duralde of The Wrap was the first to observe that Cruise may be the only person in the world who can successfully imagine what it was like to be, say, Axl Rose in 1987. (And I also think Alonso completely fails to appreciate the true genius of this movie.)

I've always found Cruise to be a powerful actor, albeit one with severely limited range, but I actually think he's gotten much better as he's gotten older and weirder. He has now ascended, in fact, to a realm of remoteness and strangeness that rock stars have generally abandoned -- since we really don't have rock stars anymore -- and that no movie star has occupied since the death of Marlon Brando. But the problem with Cruise's performance as Stacee in "Rock of Ages," and especially his erotic encounter with a Rolling Stone reporter played by the wonderful Malin Akerman -- is that he calls the auto-tuned, overdecorated, cheeseball schmaltz of the rest of the movie into question. Stacee belongs in some other movie, maybe the great film about '80s rock that Cameron Crowe has never managed to make. In this one, he's like a wild thing, the tragic, dying spirit of rock 'n' roll, trapped in a cage made of candy.