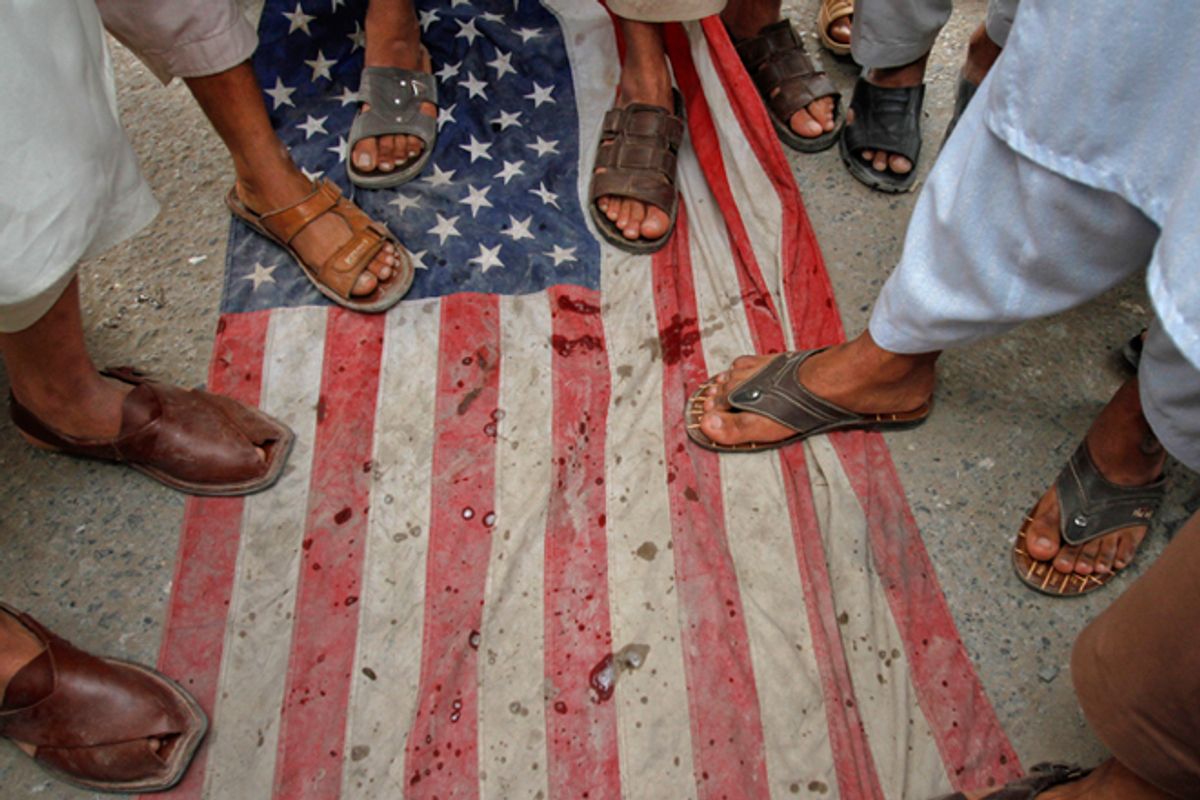 Pakistani men step on a U.S flag during an anti-American rally in Peshawar on April 13. (Reuters/Fayaz Aziz)
--

Last night I wrote about how Obama's drone attacks and other forms of militarism in the Muslim world are making another Terror attack on U.S. soil more likely, while my Salon colleague Jefferson Morley documented the mass political instability those policies are spawning. A newly released international polling survey from the Pew Research Center sharply underscores both points.

The new multi-nation poll finds that "in predominantly Muslim nations, American anti-terrorism efforts are still widely unpopular." Beyond Muslim nations, "in nearly all countries, there is considerable opposition to a major component of the Obama administration’s anti-terrorism policy: drone strikes." Specifically, "in 17 of 20 countries, more than half disapprove of U.S. drone attacks." As usual, "Americans are the clear outliers on this issue – 62% approve of the drone campaign, including most Republicans (74%), independents (60%) and Democrats (58%)." But in every other surveyed country besides India (which naturally supports any attacks in Pakistan), more people disapprove of Obama's drone strikes than approve, usually by very wide margins. Indeed, "the policy is unpopular in majority Muslim nations, but also in Europe and other regions as well"; specifically, "at least three-in-four [are opposed] in a diverse set of countries: Greece (90%), Egypt (89%), Jordan (85%), Turkey (81%), Spain (76%), Brazil (76%) and Japan (75%)."

Just as is true in the U.S., Obama -- revealingly and unsurprisingly -- finds ample support for his policies among the European Right, with substantial opposition on the Left. "A majority (56%) of those who describe themselves as being on the political right in Britain favor U.S. drone strikes against extremists, but just 31% on the left agree." And "a similar gap emerges in France, where about half of those on the right (49%) approve of the drone attacks, compared with about one-quarter (26%) among people on the left. Double-digit differences are also found in Italy, the Czech Republic and Germany."

It's an article of faith in many progressive circles that Obama has "restored America's standing in the world" -- they'll just state it as though it's gospel -- but it's patently untrue. While it's true that Europeans and citizens of long-standing American allies such as Japan and Brazil generally view Obama far more favorably than they did George Bush (though far less so than was true in 2009), and the U.S. continues to be viewed favorably in the West, the perception of the U.S. in the Muslim world is as bad as, or even worse than, the lowly levels of the Bush era:

In a number of strategically important Muslim nations, America’s image has not improved during the Obama presidency. In fact, America’s already low 2008 ratings have slipped even further in Jordan and Pakistan. . . .

There is little support for Obama, however, in the predominantly Muslim nations surveyed. Fewer than three-in-ten express confidence in him in Egypt, Tunisia, Turkey and Jordan. And roughly a year after he ordered the Abbottabad raid that killed Osama bin Laden, just 7% of Pakistanis have a positive view of Obama, the same percentage that voiced confidence in President George W. Bush during the final year of his administration. . . .

In nearly every country where trends are available, support for Obama’s international policies has declined over the last three years. . . . . The U.S. receives many of its lowest ratings in predominantly Muslim nations. Among Muslim nations, the median has slipped from 34% to 15%. . . . Fewer than one-in-five have a positive opinion about America in Egypt (19%), Turkey (15%), Pakistan (12%) and Jordan (12%)

This is all consistent with numerous other international polls showing the U.S. under Obama as being deeply unpopular in the Muslim world generally and specifically in the region's most strategically significant nations such as Egypt; not only has there been little improvement since the Bush era (with very few exceptions), in some cases the U.S. is mildly more unpopular now in that region. Notably, China is vastly more popular than the U.S. in the Muslim world.

This isn't the by-product of some sort of reflexive, irrational anti-Americanism. In fact, there is substantial favorability toward American cultural influences and political ideals, including in the Muslim world (especially among younger Muslims). The cause of this anger is clear and rational; as even a Rumsfeld-commissioned 2004 study explained: "Muslims do not 'hate our freedoms', but rather they hate our policies."

Fortunately, caring about international opinion -- like so many other things -- is so very 2004, especially in Democratic Party circles (notwithstanding the fact that, as that Rumsfeld-era report documented, anti-American animus arising from American aggression is the greatest security threat and the prime source of Terrorism). Who cares if virtually the entire world views Obama's drone attacks as unjustified and wrong? Who cares if the Muslim world continues to seethe with anti-American animus as a result of this aggression? Empires do what they want. Despite all this, these polling data will undoubtedly prompt that age-old American question: why do they hate us?