An amazing Op-Ed in the NYT by a 23-year-old Yemeni explains that U.S. attacks are strengthening the Terrorists 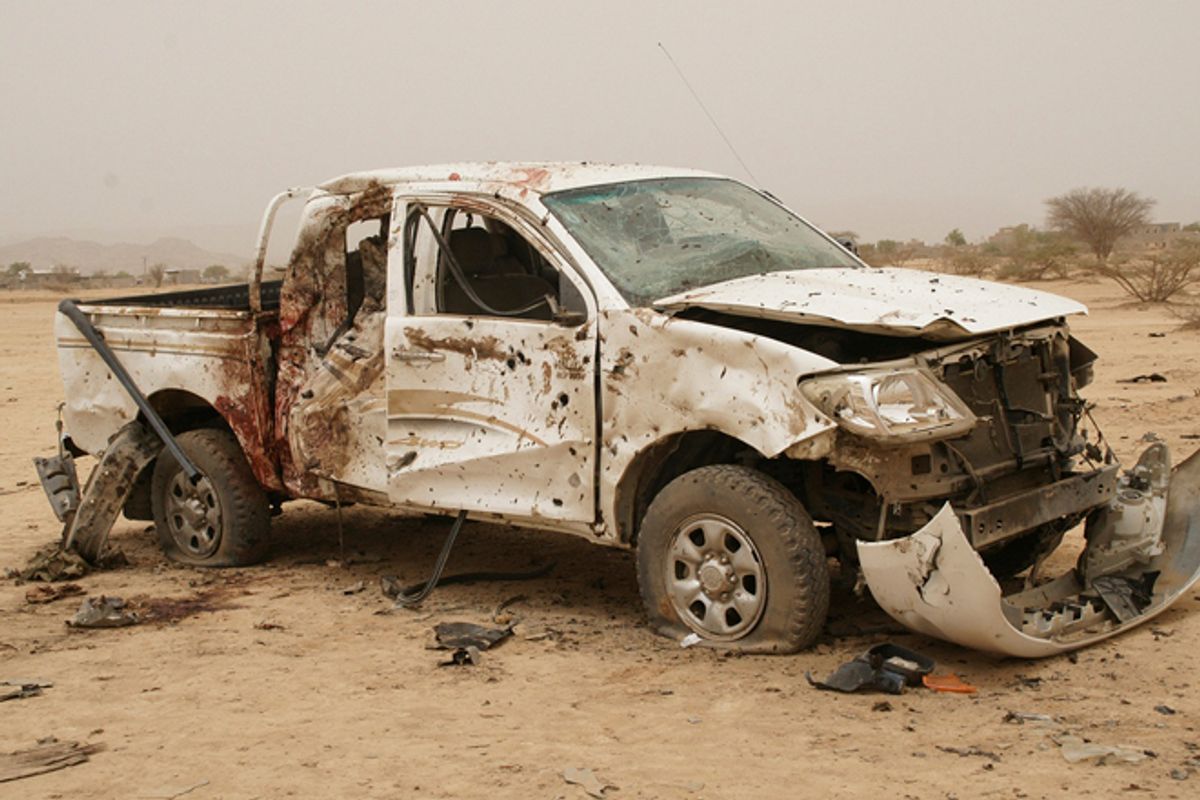 The New York Times has an extraordinary Op-Ed this morning by Ibrahim Mothana, a 23-year-old democracy activist and Al Qaeda opponent in Yemen. The headline is "How Drones Help Al Qaeda," and it explains in compelling detail how the principal U.S. tactic ostensibly devoted to fighting Al Qaeda in his country -- repeated drone attacks -- is having exactly the opposite effect. Even though I'm going to excerpt some of it to discuss it, I really urge everyone to read all of it. He begins this way:

"DEAR OBAMA, when a U.S. drone missile kills a child in Yemen, the father will go to war with you, guaranteed. Nothing to do with Al Qaeda," a Yemeni lawyer warned on Twitter last month. President Obama should keep this message in mind before ordering more drone strikes like Wednesday's, which local officials say killed 27 people, or the May 15 strike that killed at least eight Yemeni civilians.

Drone strikes are causing more and more Yemenis to hate America and join radical militants; they are not driven by ideology but rather by a sense of revenge and despair. Robert Grenier, the former head of the C.I.A.’s counterterrorism center, has warned that the American drone program in Yemen risks turning the country into a safe haven for Al Qaeda like the tribal areas of Pakistan — "the Arabian equivalent of Waziristan."

Anti-Americanism is far less prevalent in Yemen than in Pakistan. But rather than winning the hearts and minds of Yemeni civilians, America is alienating them by killing their relatives and friends. Indeed, the drone program is leading to the Talibanization of vast tribal areas and the radicalization of people who could otherwise be America’s allies in the fight against terrorism in Yemen.

This is not a new phenomenon, as he notes. Indeed, the first Obama-ordered airstrike on his country -- one that took place less than two months after the President received the 2009 Nobel Peace Prize -- included cluster bombs and was nothing short of horrific:

The first known drone strike in Yemen to be authorized by Mr. Obama, in late 2009, left 14 women and 21 children dead in the southern town of al-Majala, according to a parliamentary report. Only one of the dozens killed was identified as having strong Qaeda connections.

The outcome is as predictable and stark as it is tragic for that country (and potentially for the U.S.):

Certainly, there may be short-term military gains from killing militant leaders in these strikes, but they are minuscule compared with the long-term damage the drone program is causing. A new generation of leaders is spontaneously emerging in furious retaliation to attacks on their territories and tribes.

What's most amazing about this is that U.S. government officials -- and the sham industry known as "Terrorism experts" which exist to justify their actions -- now point to AQAP as the greatest security threat to America (to justify themselves, they need to point to some Grave Threat now that bin Laden is dead). And yet the greatest source of strength for AQAP is precisely the actions of those same officials, ones which the "Terrorism expert" industry overwhelmingly supports:

And the situation is quite likely to get worse now that Washington has broadened its rules of engagement to allow so-called signature strikes, when surveillance data suggest a terrorist leader may be nearby but the identities of all others targeted is not known. Such loose rules risk redefining “militants” as any military-age males seen in a strike zone. . . .

This is why A.Q.A.P. is much stronger in Yemen today than it was a few years ago. In 2009, A.Q.A.P. had only a few hundred members and controlled no territory; today it has, along with Ansar al-Sharia, at least 1,000 members and controls substantial amounts of territory.

He ends by expressing his despair over the widespread approval in the U.S. for these Al-Qaeda-strengthening, civilian-killing attacks in his country (even as the rest of the world overwhelmingly objects), and he identifies exactly the right culprit:

Unfortunately, liberal voices in the United States are largely ignoring, if not condoning, civilian deaths and extrajudicial killings in Yemen — including the assassination of three American citizens in September 2011, including a 16-year-old. During George W. Bush’s presidency, the rage would have been tremendous. But today there is little outcry, even though what is happening is in many ways an escalation of Mr. Bush’s policies.

Defenders of human rights must speak out. America’s counterterrorism policy here is not only making Yemen less safe by strengthening support for A.Q.A.P., but it could also ultimately endanger the United States and the entire world.

Mainstream American progressivism has really disgraced itself with the behavior that Mothana laments in that passage. What's most amazing to me about this discussion is how it is simultaneously (a) so obvious (apparently, when you bomb people and constantly kill civilians, you make them want to attack you back: who knew?) and yet (b) so impervious to evidence and reason. It doesn't matter how much proof you supply that this is true, that U.S. militarism and interference in the Muslim world is largely responsible for the very Terrorism problem that is invoked to justify them. It makes little difference.

You can show people the statements of accused Terrorists about why they are willing to sacrifice their lives to harm Americans and the evidence of what radicalized them, and how they almost unanimously cite the desire to avenge U.S.-caused civilian deaths. You can show them studies commissioned by the U.S. Pentagon which document the same thing. You can show them statements from the U.S. Government itself explaining that the 9/11 attackers were motivated by a desire to avenge U.S. aggression and deter further interference in the Muslim world. You can show them the in-depth reporting from American journalists who travel to these countries (or are held hostage there) and then emphatically warn that it is U.S. attacks which are fueling anti-American Terrorism. You can show them experts in these countries who devote their lives to studying them who issue the same warnings. And you can show them the pleas from the people who live in these countries -- such as Ibrahim Mothana -- who are distraught and angry that the U.S. is emboldening Al Qaeda in their country with its ongoing attacks and killing of civilians.

But this mountain of empirical evidence doesn't matter. Americans (especially media figures) have been so inculcated with a childish morality narrative which is pleasing and self-affirming to believe -- The Terrorists attack us because they are bad and we are good -- that it's just inconceivable that it is actually the U.S. itself which is enabling these plots and has long been galvanizing the very anti-American animus that fuels them. That, combined with rank partisan opportunism (these are Obama's drones), has rendered this causal truth nothing short of taboo.

Whenever one points this causal connection -- as I've done the last two days -- one is immediately smeared with the same trite decade-old Rovian insults used to impugn critics of American aggression and militarism in the War on Terror (Andrew Sullivan has hauled them all out in the last couple days: you don't care about 9/11, 9/11, 9/11 and 9/11; you want Osama bin Laden to be on the loose killing Americans, etc. etc. (apparently, wanting bin Laden treated like Nazi war criminals -- arrested, tried and then punished if convicted -- is tantamount to advocating for his freedom)). The constant assumption in American political discourse is that there are so very many people in the world eager to attack the U.S. -- The Terrorists -- but the question of why this is so is simply never asked (actually, I ask that question often, but aside from patent propagandistic pap (they hate us for our Freedom) it's rarely answered).

I know it's difficult for someone to realize this when they believe that what appears on CNN and MSNBC represents the full range of mainstream political ideas on the planet, but cheering for American violence and affirming its imperial prerogatives to attack anyone it wants isn't the norm in the world. That mindset is a small, heinous aberration. Read Ibrahim Mothana's Op-Ed today to understand why that is.

UPDATE: Related to this, also worth watching is Jon Stewart's five-minute commentary last night on Obama's kill list, his re-definition of "civilian," and the war on leaks: