The Bushes will never go away 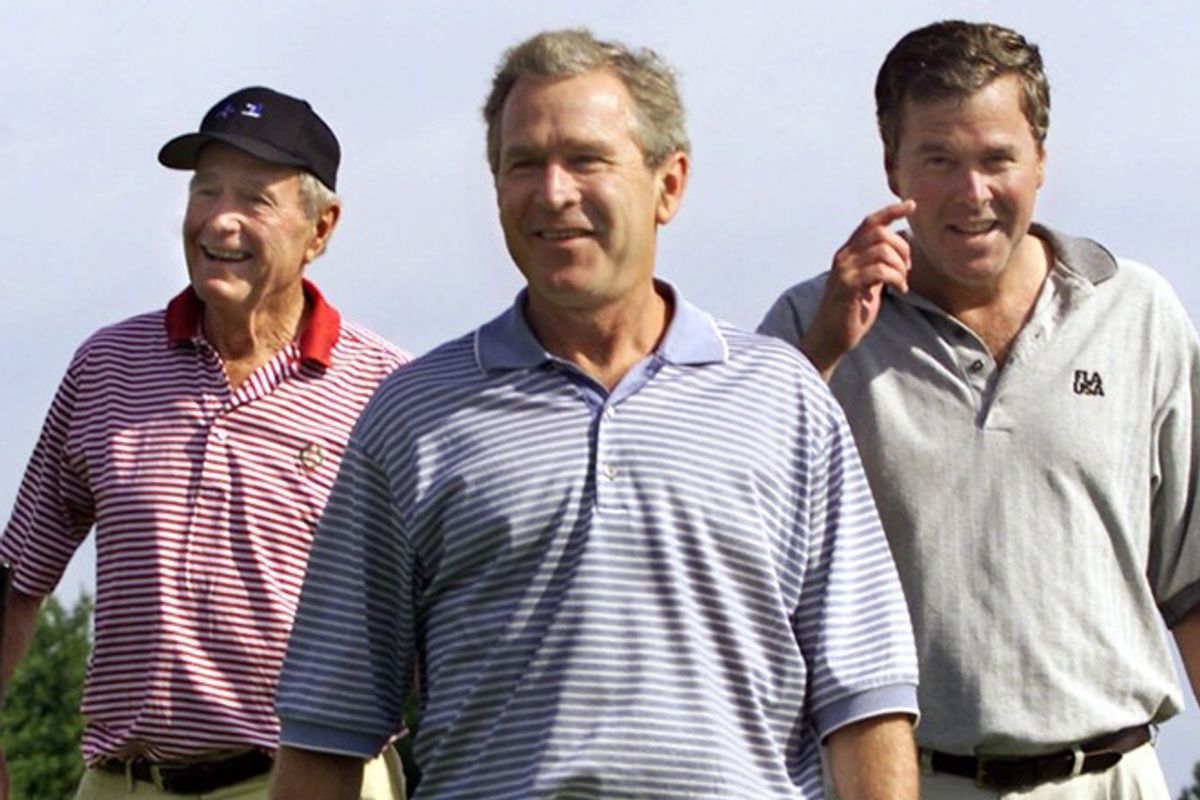 Even before George W. Bush's head turned up on a stake in "Game of Thrones," the former president was fast returning to the political conversation. A poll last week found him to be the least popular living president, and President Obama continues to point out what a miserable failure he was.

He's not the only Bush to figure prominently in the news. In fact, after a year-plus Republican primary season in which the name of the Republican president who ran the country for two-thirds of this millennium somehow went unspoken, all three of the major Bush boys are back. Former President George H. W. "Poppy" Bush, a committed Romney man, will babble aimlessly about his life and presidency in an HBO documentary set to debut tonight. And Jeb Bush, the long-rumored "smart" Bush child (he'd gut the welfare state for fun, but hey, he speaks Spanish), continues to find himself disparaged by the Republican base after suggesting, scandalously, that the American system of government requires compromise to function.

Soon enough this latest pit stop of theirs in the national media will end, and they'll schooner back to their 900-year-old stone palace in Maine and let the Americans have their loser play-toy 2012 election to themselves. A short-term exile into uselessness is nothing for the Bushes, though.

They weathered it during the candidacies of Dole and McCain, just as they'll do now with Romney, and then in 2016 Jeb Bush will reluctantly cash that birthright voucher offering him one presidency of the United States during his life, at the time of his choosing. This is simply the way things work, this is history, and don't even bother engaging in debates about whether the fat screaming man from New Jersey or the 9-year-old Floridian boy in the United States Senate could be "charismatic" enough to overcome a man, Jeb, imbued with the divine right of kings.

Non-Bush elections such as this year's are themselves the direct consequences of Bush presidencies, which always end with the GOP rejecting the Bush family and the entire generation of Republican politics they practiced. Daddy is always so strict, and then his term ends, and the rest of the party decides it's time to have some fun.

George H. W. Bush was a moderate who raised taxes when he had to, managed the end of the Cold War, and generally accepted the idea that the federal government should be an actor in economic affairs. The conservative base found this boring and tiresome. So when Bush lost reelection, Newt Gingrich stepped in to soak up all of the party's repressed passions for eliminating the welfare state. The state of nature was back. But Newt Gingrich and leaders of the 1994 Republican Revolution immediately went insane and didn't know how to govern a country and humiliated themselves into uselessness. Bob Dole, for lack of anyone better, finally realized his lifetime goal of losing a presidential election, and then went away. The party handed itself back to the Bush family, to keep the trains running on time.

George W. Bush wasn't much of a man, but circumstances didn't seem to require much of a man to keep the trains running on time from 2001 onward. Bush knew how to read an electoral map well enough, and the big issue of the 2000 election was what to do with all that extra cash after a decade of projected, rising budget surpluses had paid off the entirety of the national debt. Any warm-blooded mammal, really, would've been fine, and so, Bush. Of course he did manage to screw it all up -- all of it -- in what can only be described as an eight-year experiment in arbitrarily going out of one's way to do everything wrong, just for kicks. Bush, like his father, was rejected by the party afterward and replaced with a schizophrenic muppet fire parade called the Tea Party; the Tea Party's Republican House, like Gingrich's, immediately went insane and didn't know how to govern a country and humiliated itself into uselessness. Mitt Romney, for lack of anyone better, purchased the party's presidential nomination. Unlike Dole, he has a fine chance of winning the general.

But if Romney loses this year? Well, time to face the music and tell Daddy he can have his government back again. Jeb Bush will be summoned to keep the trains running on time. This is simply how things work.

But how many more of these cycles does America have left in the tank, anyway? Jeb Bush will leave office, Bristol Palin will become House speaker through a hybrid public service/reality show contract type deal, everything will go to hell again, John McCain's corpse will be brought in to lose the next non-Bush election, and then, say, Pierce Bush will come in to watch over things for a few years, if he ever gets over that hangover. And that should carry us right about to the Apocalypse, as gentlemen.