Rand Paul takes on the Pentagon

The Kentucky senator wants to curb unmanned flights, but the Air Force tells Salon about its plans to expand them 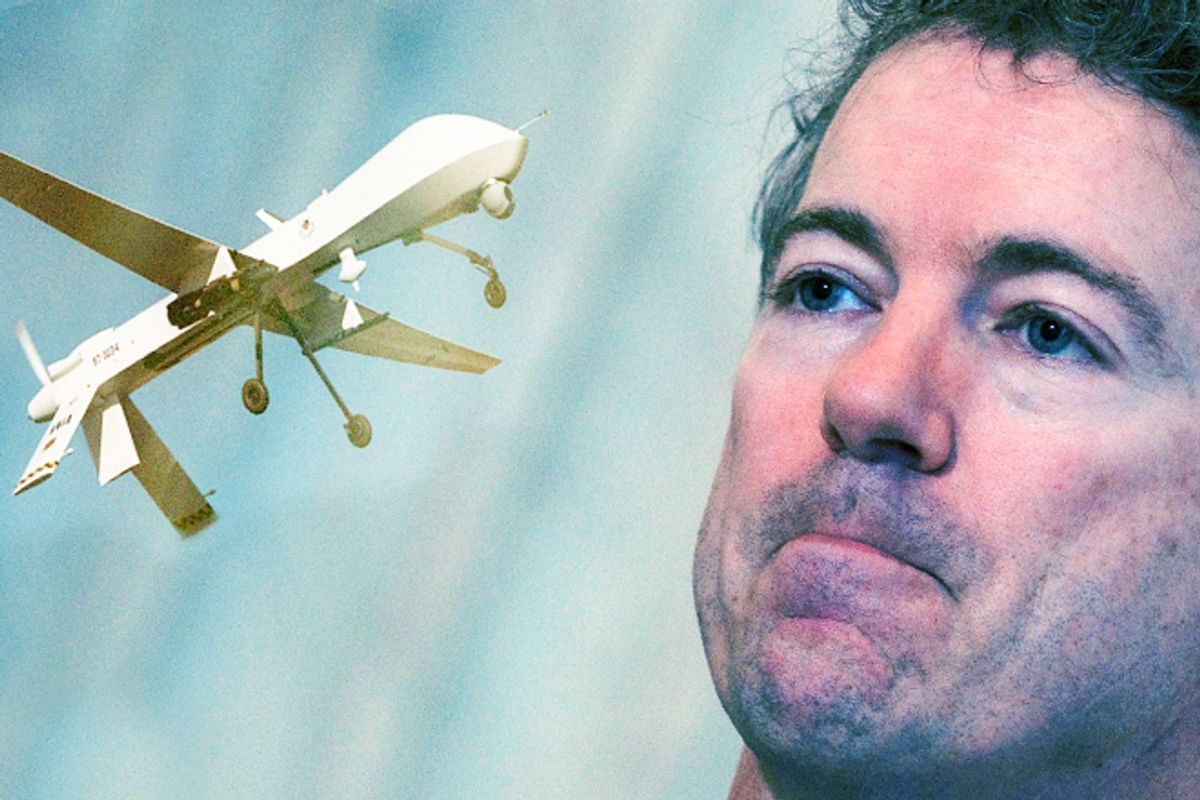 As the Pentagon leads the push to integrate military drones into domestic airspace by 2015, Senator Rand Paul, R-Ken., is promoting legislation to curb the use of drones in the United States.

At issue is the future of the U.S. military's unmanned aviation training programs in the United States and the privacy rights of Americans. The Air Force plans to bring an estimated 500 large drones from overseas war zones to the United States by 2015, while the Army plans to buy up to 120 new drones in coming years, according to Steve Pennington, director of bases, ranges and airspace for the U.S. Air Force. In an interview at his Pentagon office, Pennington said the military needs to fly these massive unmanned aircraft at home  to prepare U.S. troops for future combat missions overseas.

"We in the Air Force and DOD [Department of Defense] believe the vast majority of the unmanned aircraft can be integrated" into U.S. airspace," he said. "They can fly just like a Cessna or a 737."

The expected influx of drones in U.S. airspace by 2015 prompted Paul to introduce legislation this week called the Preserving Freedom From Unwarranted Surveillance Act, which would  "prohibit the use of drones by the government" in the United States unless authorized by a warrant. The only exceptions identified in the legislation, first proposed by Rep. Austin Scott, R-Ga., are the use of drones for patrolling of national borders and "when law enforcement possesses reasonable suspicion that under particular circumstances, swift drone action is necessary to prevent "imminent danger to life." The Paul-Scott legislation does not make any provision for military unmanned aerial vehicles flying in domestic airspace, as envisioned by Pentagon officials.

While declining to comment on any specific bill, Pennington said he did not think new legislation is needed to protect the privacy of American citizens.

The domestic drone industry pushed Congress to open U.S. airspace to remotely piloted aircraft for public safety and commercial purposes earlier this year. But the Pentagon has been quietly pursuing the same goal for a different reason: to vastly expand training for Air Force drone operators and the Army, Marine and Special Operations troops who increasingly rely on them on the battlefield.

Earlier this month, the Senate Armed Services Committee endorsed the Pentagon's agenda. "Without the ability to operate freely and routinely in the [National Air Space], UAV development and training -- and ultimately operational capabilities-- will be severely impacted," the committee said in its report on the 2013 defense authorization bill.

U.S. combat forces fighting  in Afghanistan rely on the large drones (including the Predator, made by General Atomics, and the Global Hawk, made by Northrop Grumman) when mounting attacks on the Taliban. The large drones are also used in strikes on suspected militants in remote areas of Pakistan, Yemen and Somalia. Those attacks, while devastating to al-Qaida's leadership, have resulted in numerous civilian casualties and growing anti-American sentiment.

The Pentagon wants to expand drone training. According to Pennington, drone pilots and combat troops can now train together at only two locations in the United States before they are deployed to a war zone: Fort Polk in Louisiana and Fort Irwin in southern California. Allowing military UAVs to fly in domestic airspace just like manned aircraft would enable the Air Force, Army and Marines to engage in drone training in almost every state in the country, Pennington said.

"Those Army and Marine maneuver elements are going to be much better prepared," he said.

Preparedness or privacy? That seems to be the issue as the country and the Congress contemplates the idea of drones over America

P.S. The fiery crash of a huge Navy-operated Global Hawk drone in Maryland on Monday was a reminder that the U.S. military is already conducting drone training in the U.S. airspace. Pilots at the Patuxent River Naval Air station were flying the drone  in airspace known as a Military Operations Area, where civilian aircraft are allowed, according to Lt. Aaron Kakiel, a Navy spokesman in San Diego.

The pilots of the Global Hawk drone, which has a 116-foot wingspan and weighs 25,000 pounds, lost communications contact with the aircraft around noon on Monday. A reconnaissance patrol found that the $175 million drone had been completely destroyed when it slammed into uninhabited Bloodsworth Island in the southern end of Chesapeake Bay spraying flaming debris over a marshy area the size of a football field. (View the Associate Press raw footage here.)

The causes of the crash are under investigation, Kakiel said. Drone training flights at the Patuxent River station will not resume until the probe is completed in "a couple of weeks," he added.