How cozy is Romney with K Street?

Lobbyists have brought in $1.2 million for the GOP candidate, who is rewarding them with access 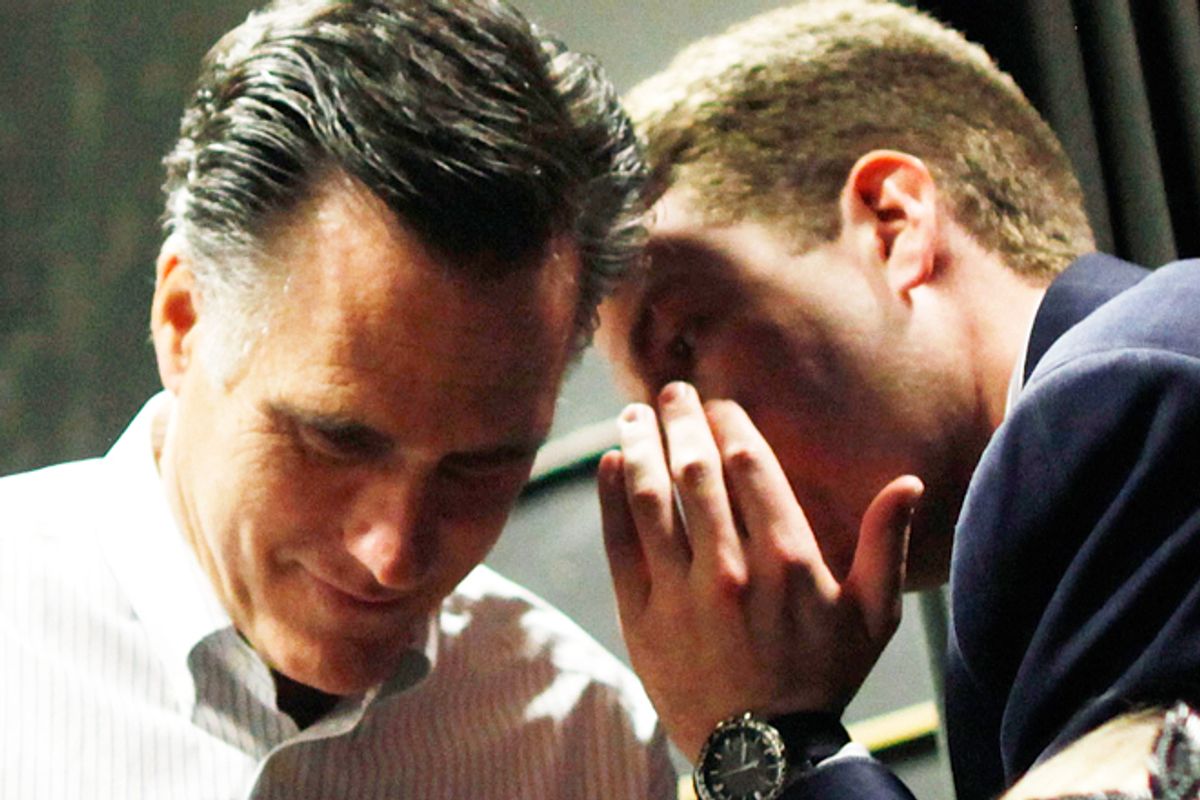 Mitt Romney's eye-popping and Democrat-worrying fundraising haul last month (he out-raised President Obama by nearly $17 million) had a lot to do with K Street, Roll Call's Eliza Newlin Carney reports today. Romney, who made attacking John McCain's ties to lobbyists a centerpiece of his 2008 presidential campaign, has used lobbyists to bundle more than $1.2 million in contributions. In exchange, they "enjoy weekly telephone briefings with the campaign, VIP entry to exclusive receptions and retreats and, in some cases, the chance to bend Romney’s ear on policy issues," Carney reports. Romney will hold three fundraisers around D.C. in June to rake it in, and at least 294 lobbyists had donated to the candidate by the end of 2011.

Romney’s top lobbyist bundler, not surprisingly, is a banker:  Patrick Durkin, a managing director at Barclay’s. He's brought in almost $1 million for the candidate, while others bringing in the dough for Romney include Goldman Sachs lobbyists and others.

Lobbyists provide a rare window into whom Romney is tapping to raise money for him, as he's broken with precedent and has so far refused to disclose his bundlers. Lobbyists who bundle are required by law to disclose. Even though election law doesn't require it, every major party presidential nominee  has revealed their bundlers, who tap friends and family to pool contributions, since George W. Bush started the practice in 2000.

But Romney's fundraising from lobbyists is just one piece of his ties to K Street. Romney's extended group of advisers "includes some of the most prominent Republican lobbyists in Washington, including Charles R. Black Jr., the chairman of Prime Policy Group and a lobbyist for Wal-Mart and AT&T; Wayne L. Berman, who is chairman of Ogilvy Government Relations and represents Pfizer, the drug manufacturer; and Vin Weber, the managing partner for Clark & Weinstock," the New York Times' Nicholas Confesore reported in February. Policy advisers include a Bush-era ambassador to Canada who now lobbies for the Canadian oil industry, and a former State Department official who now lobbies for General Dynamics, the huge defense contractor. Ron Kaufman, another big-time GOP lobbyist, "has been traveling across the country with Romney, providing advice and conducting strategic meetings," the Boston Globe reported in January. Kaufman did the same for Romney in 2008.

When Romney went after McCain four years ago for employing lobbyists, he boldly declared, "I don't have lobbyists running my campaign." Politifact gave that claim a "false," concluding, his "campaign is ankle-deep in lobbyists." The former Massachusetts governor got in a heated argument with the AP's Glen Johnson when he made the claim, with Johnson unable to contain himself as Romney engaged in a semantic parsing about whether or not Kaufman was technically "running his campaign."

Ironically, Romney attacked McCain for relying on some of the same lobbyists involved in his campaign today. Black, the GOP super-lobbyist, was a close aide to McCain during the campaign (he got him in trouble late in the general election when he suggested a terror attack would be politically beneficial) and is now playing for Romney, “trying to help however I can."