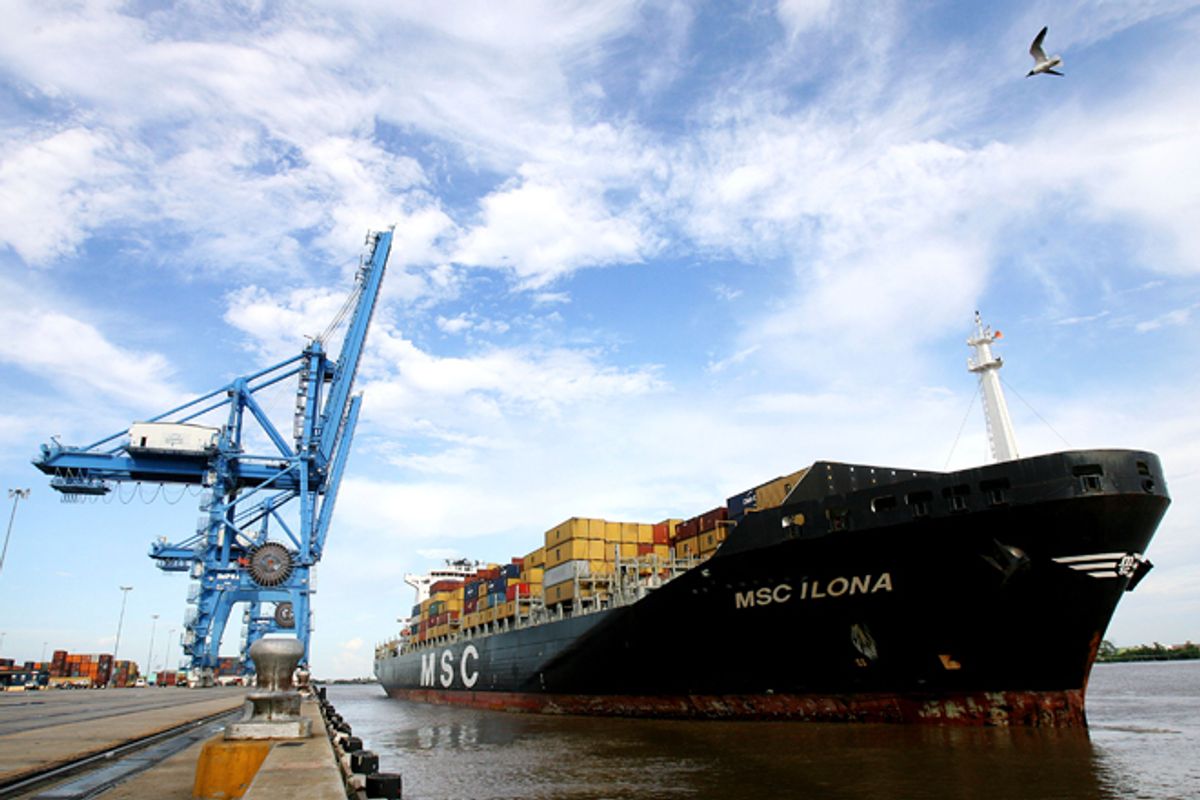 President Obama campaigned in 2008 as a strong pro-labor candidate, and this year he will again. But for union activists who'll be working hard for his reelection, a newly leaked document represents yet another bitter disappointment.

The document contains draft text of a chapter of the Trans-Pacific Partnership trade agreement currently being negotiated between the U.S. and eight Pacific countries. The Obama administration has shrouded the negotiation in secrecy, but the document, published by a coalition including the consumer group Public Citizen, sheds a light on the process -- and the view isn’t pretty.

“The leaked document,” says Todd Tucker, the research director of Public Citizen’s Global Trade Watch division, “shows that in all of the major respects, this is exactly the same template that was used in NAFTA and other agreements that President Obama campaigned against.” Public Citizen warns that the provisions of the agreement would allow other countries to join in the future, giving it the potential to become a new global trade agreement, larger than NAFTA.

Consumer groups and unions are particularly outraged over the Obama administration’s plan that would allow corporations from TPP countries to bring suit before a multinational tribunal when laws or regulations in another member country harm their profits.

Tucker warns that such language means that an individual company “that’s not necessarily pursuing the national interest as a whole can attack environmental regulations without first having to go through any kind of diplomatic process.” He notes that "We've seen over $300 million paid out to investors as a result of NAFTA cases" challenging environmental and financial regulation. Tucker gave the example of a Mexican municipality forced to pay $15 million to a U.S. investor who had bought a landfill that was being subjected to regulation. Tucker said companies are also "using it preemptively to cast a chill on regulation that might be coming down the pike."

While he isn't aware of a NAFTA case specifically targeting labor regulations, Tucker said that the "pretty broad" language of the draft TPP proposal could be used, for example, to attack an increase in labor inspections, as well. Tucker added that the current TPP proposal confers no equivalent power for labor unions to challenge anti-union or anti-worker policies in other countries.

Celeste Drake, a trade policy specialist for the AFL-CIO, said the federation has voiced concerns with U.S. officials that the language could be used to attack labor regulations like mandatory overtime or maternity leave. She says "they have not shared our concerns, but have also not presented a compelling argument regarding why such challenges could not happen under our existing investment language." Given Obama’s campaign rhetoric about reining in over-broad investor rights like those in NAFTA, said Drake, “definitely, it’s a disappointment.” She said the AFL-CIO hopes that negotiators from other countries will seek “to put in text that would be friendlier to human beings than what the traditional U.S. text is.”

While Obama disappointed many progressives by backing trade deals with Korea and Panama that had been drafted during the Bush administration, Tucker said he finds the TPP draft more disturbing because the substantive work on it happened under Obama.

Reached over email, Deputy Assistant United States Trade Representative for Public and Media Affairs Nkenge Harmon said that she could not comment on purported leaked documents, but defended the administration’s approach: “This administration is committed to ensuring strong environmental, public health, and safety laws. Nothing in our TPP investment proposal could impair our government’s ability to pursue legitimate, non-discriminatory public interest regulation.”

Tucker called that response “a misrepresentation of what’s at issue here. No one’s saying that the government won’t be able to pass public interest laws in the first place.” But “once public interest laws are passed, they are susceptible to attack by multinational companies, and taxpayers could be on the hook to pay multinational companies for the privilege of passing that public interest law.” Tucker said that in pushing for consumer protections, Public Citizen already gets push-back from legislators who say they worry proposed legislation would trigger a suit under NAFTA.

Union officials also expressed outrage over the leaked info or distress over the state of the negotiations. Joseph Nigro, the president of the International Association of Sheet Metal, Air Rail and Transportation Workers, said over email that the leak showed that “this Administration would seek to extend the worst parts” of “horrible trade agreements like NAFTA.” Nigro said the leaks offered an example of why his union “will only support and work for those candidates and parties that serve to support working people.” Without mentioning Obama by name, Nigro urged “supporters of this measure” to “cut out the caviar, celebrity photo ops and cocktail parties and spend a day in the shoes of the average working person and seeing the damage it will cause.”

“This is what happens when you get an administration that is pretty much in the lap of corporate America,” said Chris Townsend, the political action director for the United Electrical, Radio and Machine Workers of America and a longtime Obama critic. “That’s who they perform for, and that’s who most of them will go to work for after they lose the election in November.”