"Extraterrestrial": The girl and the flying saucer 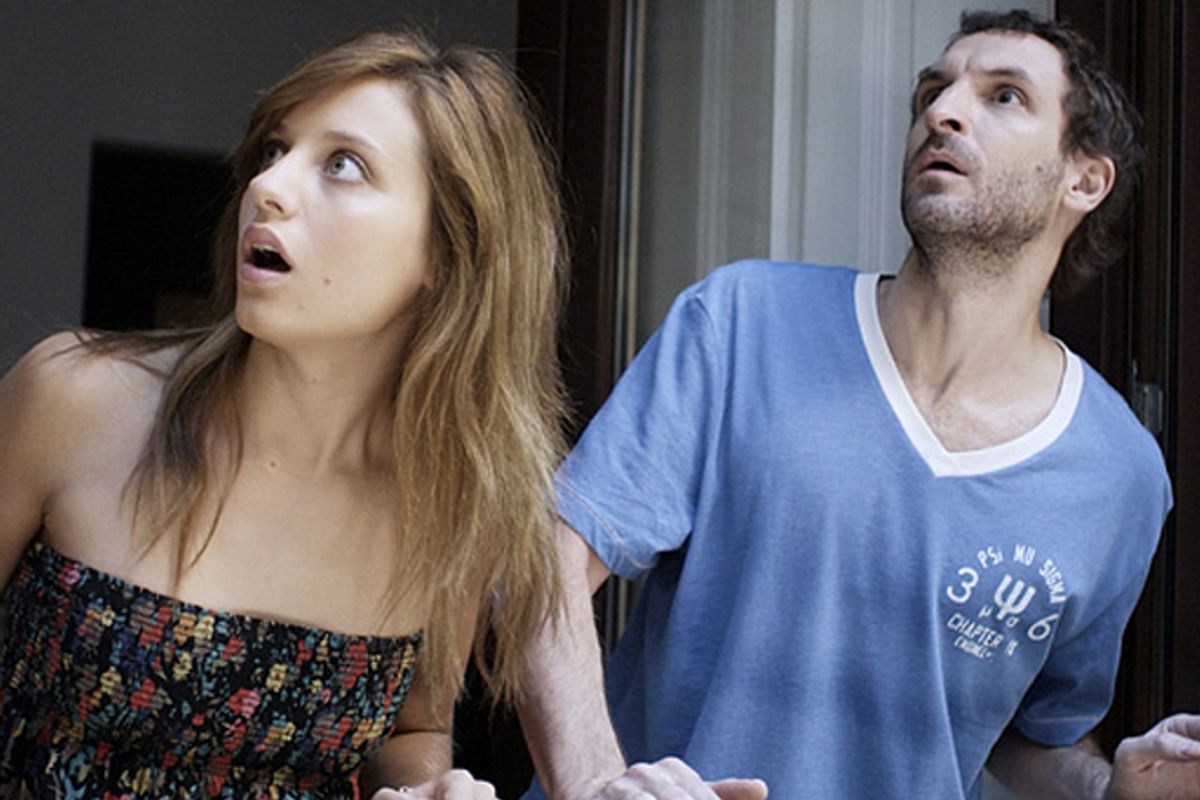 When a 30ish Madrid industrial designer named Julio (played by the scruffy, handsome Spanish actor Julián Villagrán) wakes up one day in an apartment he doesn't recognize, inhabited by a beautiful woman whose name he doesn't know, it seems like the ending of one of those nights. We kind of know where this particular story is likely to go, right? They part awkwardly, are brought back together by some cosmic-comic twist of fate and coincidence, and then face a crisis that will determine their future. Well, all of that's going to happen to Julio and Julia (that's her name, and she's played by the lovely Michelle Jenner, a Spanish TV star), but first there's the question of the enormous flying saucer hovering over their empty city.

Such is the setup for "Extraterrestrial," a bone-dry and nearly pitch-perfect combo of romantic comedy, absurdist farce and alien-invasion drama from writer-director Nacho Vigalondo, a rising star in the alternate universe of Spanish cinema, where the barriers between genre pictures and art-house movies have been gleefully destroyed. Once a writer for Spain's version of "Big Brother," Vigalondo made his feature-film debut in 2007 with the delightfully ludicrous time-travel paradox "Timecrimes," a film about a man who takes a journey an hour into the past, starting a Rube Goldberg-style chain of idiotic consequences. "Extraterrestrial" is a subtler and cooler film that does not aspire to be a brain-teaser in the same way. But it operates on a similar principle: Decades of watching science-fiction movies have left us all convinced that we know how to behave when faced with an improbable catastrophe, but when the chips are down, we'll actually act like buffoons.

It's not spoiling much to let you know that the alien invaders in "Extraterrestrial" pretty much constitute a giant MacGuffin. How much anybody knows about them and what they're doing here is a subject of constant debate, not to mention pirate TV broadcasts delivered by a pompous, abusive diva (Miguel Noguera) who keeps neglecting to notice that the camera is still turned on. Almost the only thing we can say for sure is that the military evacuated central Madrid while Julio and Julia were crashed out, but that Julia's mildly creepy neighbor, Ángel (Carlos Areces, the demented-clown star of Álex de la Iglesia's utterly insane "The Last Circus"), has stayed behind, perhaps because he values his stalkerish relationship with her more than his own life.

Oh, and Julia has a pre-existing boyfriend named Carlos (Raúl Cimas) whom she neglects to mention until he shows up at the door, having embraced the role of buff, macho apocalypse survivor. Carlos, however, welcomes Julio with a manly embrace and seems completely immune to the mounting evidence of Julia's infidelity -- which eventually extends to a barrage of tennis balls fired by Ángel from the opposite apartment building, each of them inscribed "¡JULIA FOLLA CON JULIO!" (I won't translate that, but you get the gist.) That only happens after Julio convinces Julia -- and then she convinces Carlos -- that Ángel's odd behavior can only be explained by the hypothesis that aliens are among us and he must be one of them!

We proceed through Carlos's one-man terrorist insurgency against the invisible occupiers and Julio's harebrained campaign of deception involving kidnapping, theft and a mysterious vehicle shaped like a rolling teacup. Ultimately, Vigalondo is not much interested in the aliens, and "Extraterrestrial" bears a strong resemblance to a classic American film I dare not mention because it would give too much away. Human beings are the alien species in this filmmaker's eyes, and his real subjects here are our often-futile struggle to understand our own emotions and the cruel, ridiculous and sometimes surprisingly noble things we will do for love.

"Extraterrestrial" is now playing at the reRun Gastropub Theater in Brooklyn, N.Y., and the SIFF Cinema Uptown in Seattle, and it opens June 22 at the Laemmle NoHo 7 in Los Angeles, with more cities to follow. It's also available on DVD, through iTunes and on VOD from many cable and satellite providers.