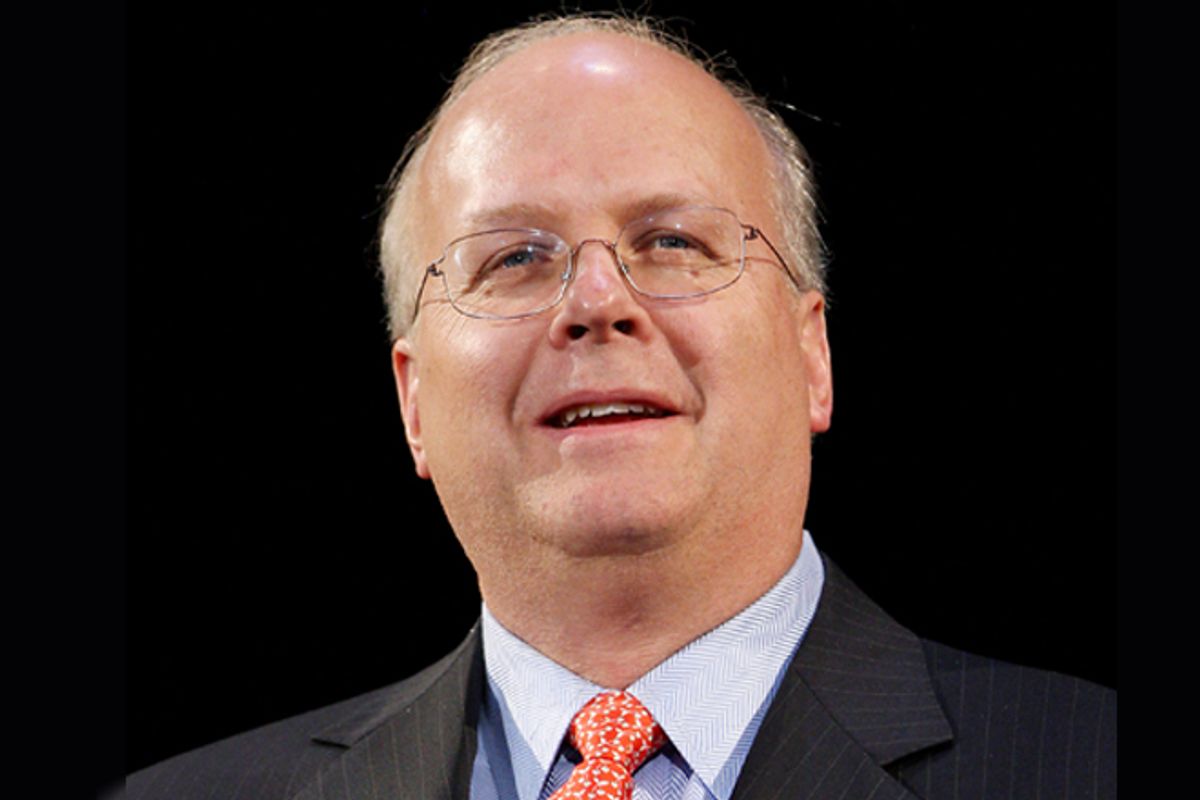 In 2005, Karl Rove sparked widespread outrage by accusing liberal critics of President Bush's Terrorism programs of sympathizing with and wanting to coddle The Terrorists:

In response, Senate Democratic leader Harry Reid's spokesman called on Bush to "immediately repudiate Karl Rove's offensive and outrageous comments." Democratic Sen. Chuck Schumer fumed: "When I heard his remarks, it turned my stomach," while his Democratic colleague Frank Lautenberg said that Bush "can only have one reaction, and that is to ask Rove to get out of his office." Leading Democrats such as Hillary Clinton and John Kerry signed a letter denouncing Rove and demanding that he resign or be fired for his remarks.

Yesterday, Gene Lyons, the long-time Democrat and syndicated columnist, wrote a column defending Obama's Terrorism policies -- he's merely doing what "what any bloody-minded pragmatist would" -- and denounced what he called "the feebleness of [Obama's] critics" (citing me as the left's example). Here's how Lyons, in the first paragraph, characterizes the position of Obama's critics:

[A]nybody who thought Barack Obama was going to deal with terrorists by sending flowers and proposing group therapy is certainly naive enough to work for the Nobel Peace Prize committee.

So if you oppose Obama's secret, lawless, civilian-killing militarism in numerous Muslim countries (as everyone from the ACLU to virtually the entire non-U.S. world does), then it means that you want to lavish The Terrorists with flowers and therapy: so sayeth Democratic Party loyalists. That's lifted from Rove almost verbatim, except that Rove's comment was more accurate and less incendiary. Rove at least acknowledged that liberals want to use legal process to punish Terrorists ("prepare indictments"), whereas Lyons ignores that entirely and substitutes it with the vile insinuation that critics of Obama's actions actually love The Terrorists and thus want to send them flowers.

The way in which many Democratic partisans have adopted the lowliest and most repellent GOP demonizing rhetoric is almost as striking as the way in which they've embraced many of their defining policies. And this comes from the top. Recall how Obama's Deputy Campaign Manager, Stephanie Cutter, on MSNBC in February, mocked Mitt Romney for saying he'd first consult with lawyers to know whether he had the legal power to start a war against Iran without Congressional approval. "That does not make a Commander-in-Chief, somebody who has to check with his lawyers," said Cutter.

Of course not: no Tough Guy Commander-in-Chief would care about annoying things like "law" and "the Constitution" before starting a war (as Obama demonstrated in Libya). Never mind that candidate Obama himself repeatedly vowed: “No more ignoring the law when it’s inconvenient. That is not who we are"; that candidate Obama said: "the President does not have power under the Constitution to unilaterally authorize a military attack in a situation that does not involve stopping an actual or imminent threat to the nation"; that Hillary Clinton co-sponsored legislation to ban President Bush from attacking Iran without the approval of Congress, and that Joe Biden actually threatened to impeach Bush if he attacked Iran without Congressional approval. Now, according to Obama campaign dogma, only weak losers would care about legal constraints before starting another war.

Cutter's scoffing at those who care about law in the context of national security policy was a perfect replica of George Bush's 2004 Convention speech mockery of John Kerry ("After the chaos and carnage of September the 11th, it is not enough to serve our enemies with legal papers"), as well as Sarah Palin's 2008 Convention derision of Obama ("Al Qaida terrorists still plot to inflict catastrophic harm on America, and he’s worried that someone won’t read them their rights"). And who can forget the DNC's attack on those who objected to Obama's Nobel Peace Prize as having "thrown in their lot with the terrorists" and being insufficiently patriotic? Or how Jonathan Alter went on MSNBC and said that attacks on Obama's foreign policy as weak "emboldens" and "gives serious help to the terrorists."

Scorning critics of the U.S. Government's militarism as law-obsessed, Enemy-enabling, Terrorist-coddling weaklings was once the defining rhetorical rot of America's Right. As Lyons' column reflects, that is precisely what is now routinely spewed by Democratic loyalists at those who criticize Obama's militarism and civil liberties assaults. The notion that Terrorists should be treated the way accused Nazi war criminals were -- with evidence presented of their guilt in a duly constituted tribunal, with oversight, transparency and in accordance with legal process -- was once the standard mainstream Democratic view (the imperative of due process for accused Terrorists was once even Obama's professed view). That view is now maligned by that same Party's loyalists with precisely the smears that George Bush, Karl Rove and Sarah Palin so infamously perfected. That revealing shift is as vital a component of Obama's legacy as anything else.

UPDATE: Twenty-six House members -- mostly progressives along with a couple of Republicans -- have written letter [linked fixed] to President Obama objecting to his newly ordered "signature strikes": targeting people whose names aren't known based on "patterns of behavior." The letter notes that the policy "is in stark contrast to what your Administration has previously claimed regarding its drone program"; complains that the drone programs in general is carried out without "transparency, accountability or oversight"; and notes that these attacks "cause civilian deaths" and "generate powerful and enduring anti-American sentiment." Isn't it amazing that so many members of Congress want to give therapy and send flowers to The Terrorists instead?