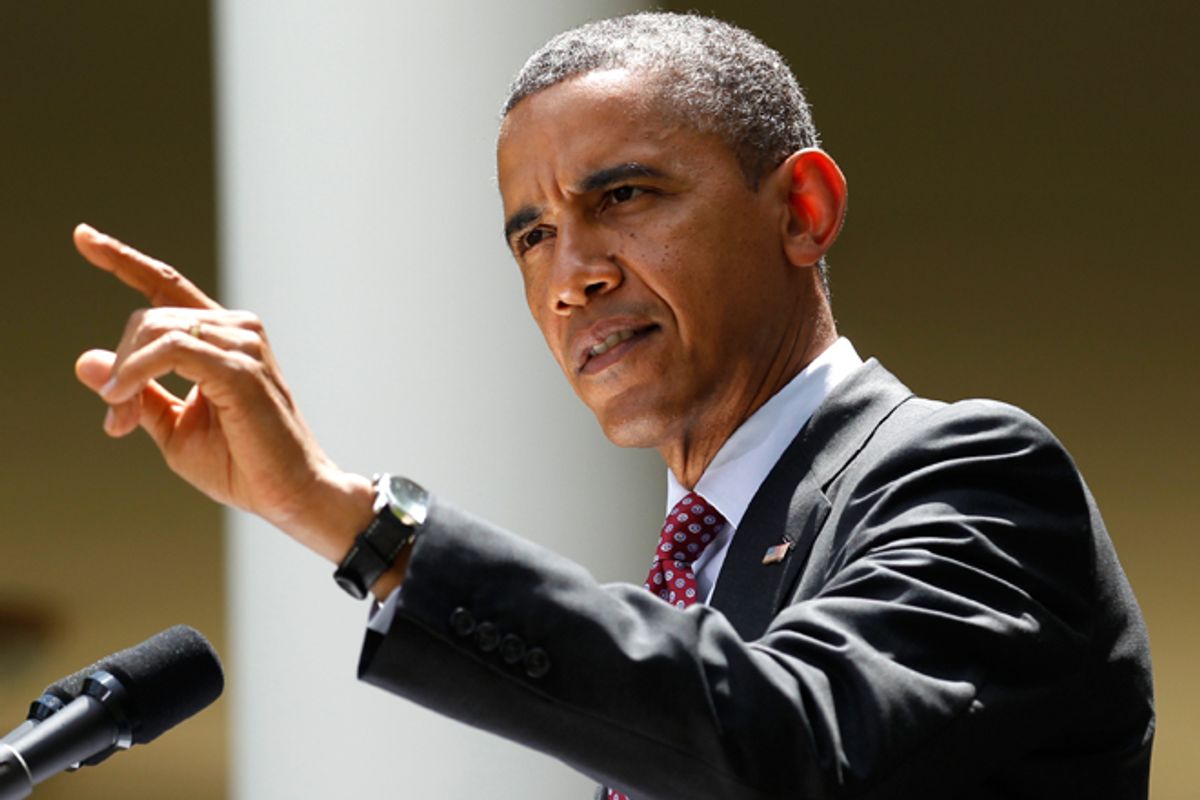 President Obama's announcement that the Department of Homeland Security will stop deporting undocumented young people who were brought to the United State as children is not only a vindication of the activist pressure tactics, as Glenn Greenwald says, and smart electoral politics, as Steve Kornacki points out. It has already reframed the immigration debate in much the same way his shift to support marriage equality reframed the politics of gay marriage.

Obama's announcement marks "a shift in how immigration is talked about," said Gaby Pacheco, a Miami student and leader of the movement that persuaded Obama to abandon his previous insistence that he did not have the legal power to protect undocumented students. "We are no longer what people call a minority. Our community is part of this country and we cannot  continue to be ignored."

By extending the protection of the law to once demonized classes — gay couples last month, undocumented students today— Obama has created a new realities that opponents now have to undo. The issue is no longer whether extending protection is legitimate. The question is whether withdrawing the protection is wise or popular. Obama's shift on gay marriage was a classic political flip flop but the muted Republican reaction reflects the reality that it is harder to argue for withdrawing legal protections  than for denying them in the first place.

Mitt Romney's "DREAMy" reaction to Obama's decision also reflect this reality. Unlike immigration hardliners, Romney did not describe the president's move as "amnesty," Rather, he made a point of linking himself to the Republican Party's most prominent  immigration moderate, Sen. Marco Rubio of Florida. He endorsed the idea of protecting undocumented students, as well as the goal of a "long term solution" for them -- something that advocates of the original DREAM Act and comprehensive immigration reform have long argued for — all while portraying Obama as an obstacle to it.

“I’d like to see legislation that deals with this issue, and I happen to agree with Marco Rubio as he looked at this issue,” Romney said in a statement provided to The Daily Caller. “He said that this is an important matter, that we have to find a long-term solution, but that the president’s action makes reaching a long-term solution more difficult. If I’m president, we’ll do our very best to have that kind of long-term solution that provides certainty and clarity for the people who come into this country through no fault of their own by virtue of the action of their parents.”

The president's announcement "has definitely changed the paradigm," said Neidi Dominguez, an undocumented student activist who I reached while celebrating the news in Los Angeles. "If Congress has failed, the only right thing to do is for the president to act. It says it would be a tremendous error to waste our talents. We want to work and give back to our country."

Chris Newman, director of the National Day Laborers Network, expressed hope the decision will "galvanize national consensus that this is the right thing to do and give some political caution to the Republicans. Would President Romney really undo this DHS policy and deport hundreds of thousand of young people?"

"You saw the president taking a reasoned approach and then there was a loud, belligerent heckler acting like a vigilante. This has happened before in this debate — where hecklers drowned out reason. This time reason prevailed over heckling, and my hope is that will constitute a trend."

Obama's decision "is really a game changer," said Laura Lichter, president-elect of the American Immigration Lawyers Association. "It is only intelligent thing to do with these kids while Congress gets its act together. It gives Congress the space to take the rhetoric out of the issue and get back to the table and figure out what the long-term solution is."

The fact that the Republican presidential candidate and the president of the  immigration bar are both talking about "a long-term solution" for undocumented young people is a sign that a new debate about immigration is underway, one in which even Mitt Romney  sees undocumented immigrants as an asset to be protected, not a problem to be "self-deported."