"Not a great president"

In an exclusive interview, Michael Dukakis reacts to a week of Poppy Bush puffery 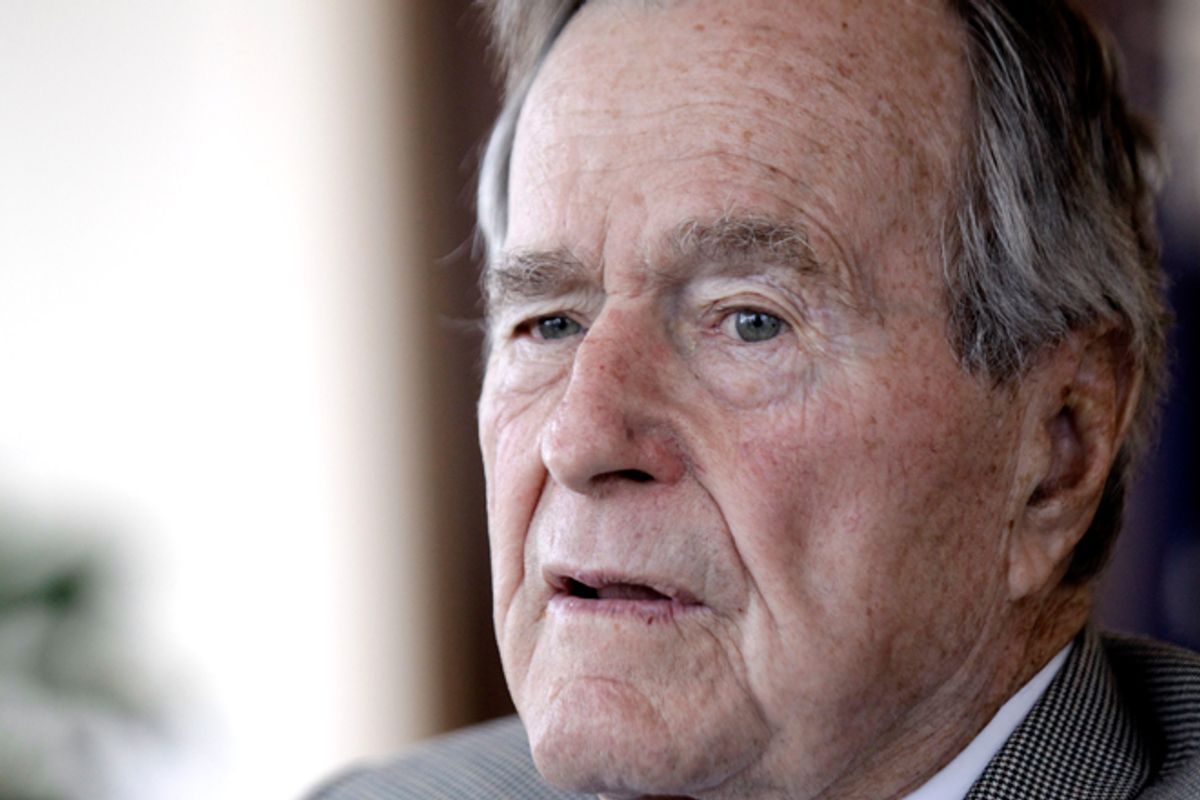 On his way out of the White House nearly 20 years ago, George H.W. Bush expressed confidence that “history will be kind” to a presidency that 63 percent of voters wanted over after a single term. More than ever, it looks like he’ll get his wish.

The former president turned 88 this week, an occasion that was celebrated with a flattering HBO documentary on Thursday night and a salute from Maureen Dowd in last Sunday’s New York Times. Soon there will be a biography from Jon Meacham, who told Dowd that the country is now in a period of “Poppy chic.”

This is the image of the first Bush presidency that seems to be taking hold: an uncommonly decent and principled man – “the last gentleman,” Meacham calls him – who preferred doing the right thing to doing the politically expedient thing. And there’s a lot to be said for it.

Bush kept his cool while the Berlin Wall fell, minimizing the potential for a violent Soviet response, gently but insistently nudged Britain and France toward accepting a reunited Germany, and assembled a genuine international coalition to prosecute a war – and showed restraint when it was over. And on the domestic front, he signed the Americans With Disabilities Act and the Clean Air Act of 1990 and went to war with his own party to raise taxes in 1990 – a key step on the path to the budget surpluses of the late ‘90s.

But there’s also a risk that the other side of the Bush 41 story might get lost in this reassessment. And no one knows that other side better than the man who vied for the presidency with Bush 24 years ago.

“I wouldn’t say that that was a gentlemanly campaign,” Michael Dukakis told me this week.

When Dukakis built a double-digit lead in the spring of 1988 – hard as it is to believe now, there was such a thing as Reagan fatigue – the Bush team unleashed an ugly, relentless and intensely personal assault on the Massachusetts governor. Aspersions on the patriotism of Dukakis -- “card-carrying member of the ACLU” -- were cast, and his reverence for the flag and the Pledge of Allegiance were challenged. Most infamous was the racially charged Willie Horton ad, which was aired by an “independent” group that took its marching orders from Atwater. At one point, Dukakis’ then-85-year-old mother, Euterpe, who had come to America from Greece as a child, stepped forward to accuse Bush of “trying to divide us people, presumably because [Dukakis] is a first generation American who probably, possibly, doesn't love the flag quite so much."

Bush was widely panned for running a gutter, substance-free campaign, but his bottom-line calculation was right and he won the November election with ease. Dukakis is philosophical about what happened.

“He’s the guy who hired those guys – Ailes and Atwater and that stuff,” he said. “You’ve got to live with that. But as far as I’m concerned, when it’s over, it’s over. The question is, OK, what kind of a president was he?”

On this front, Dukakis agrees that Bush deserves some recognition by historians, but stresses that the praise should be limited.

“Bush was an interesting guy,” he said. “Not a great president, but a thoughtful and responsible foreign policy president. I didn’t like what he did domestically, and I guess the country didn’t either. That’s why they didn’t reelect him.

“But I thought on the foreign policy side he was a guy with balance and good judgment, and what we normally expected from moderate Republicans when it came to foreign policy. He had some good people around him – guys like [James] Baker and [Brent] Scowcroft. And obviously, he played a major role in the end of the Cold War. Exercised what I thought was admirable restraint when a lot of right-wing yahoos were urging him to go to Baghdad and eliminate Saddam Hussein and take over there.”

The Bush 41 presidency coincided with a recession, which ruined the astronomical poll numbers that Bush racked up after the early 1991 Gulf War and led to his loss to Bill Clinton. As president, Bush blamed a global slowdown and inaction by a Democratic Congress for the downturn, but voters tuned him out – rightfully so, Dukakis says.

“I thought we needed a much stronger, more aggressive effort, and we just never got it.”

“Hey, I’m a guy that believes in activist government,” he said, noting some of the innovative work that he, Bill Clinton and other Democratic governors did in the 1980s.

“Clinton and I and a bunch of younger Democratic governors were doing all kinds of stuff on the economic front at the state level, because we thought that was an important thing to do. On the healthcare front, I mean I would have been pushing, pushing, pushing for decent, affordable healthcare to working people and their families. I mean, we never got that out of Bush. There were just a whole series of things that I would have attempted to do as part of a good, strong, activist agenda -- not unlike the things Clinton did.”

A few weeks after the ’88 campaign ended, Bush and Dukakis met for a public show of unity and a brief private meeting. Beyond that Dukakis says he’s had no meaningful contact with his old foe since their campaign (although he did receive a friendly note after agreeing to be interviewed by Bush’s daughter Dorothy for a book she wrote about her father). He also never heard from any of the Bush hatchet men who carved him up – except Atwater, who conveyed some words of contrition through an intermediary as he lay dying of a brain tumor in 1991.

Of the legacy Bush deserves, Dukakis said: “There were a number of things he did that his predecessor, Reagan, did not do. But on the domestic front, it was not an impressive administration.”