Steve King: If I offend you, you don't belong here

The GOP congressman defends comparing immigrants to dogs. Don't like it? Then you're not an American, he says. 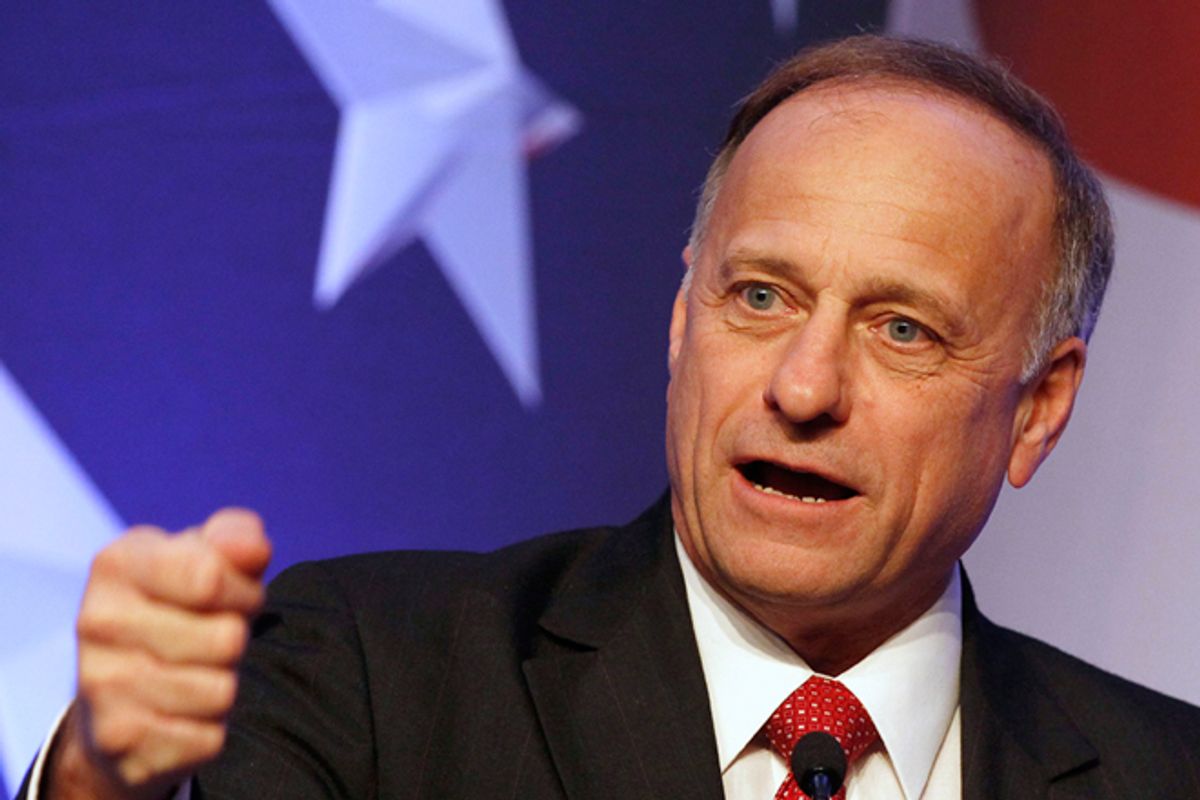 Iowa Republican Rep. Steve King caught flak last month after he was recorded comparing immigrants to dogs, in remarks first reported here at Salon. But now the Tea Party lawmaker  is doubling down on the analogy, and saying that you probably don't belong in this country if you are offended by his remarks.

At a town hall event in late May, King said the U.S. should pick only the  best immigrants from around the world the same way one chooses the best dogs from a litter of puppies. "You get the pick of the litter and you got yourself a pretty good bird dog. Well, we’ve got the pick of every donor civilization on the planet,” King told the crowd. The comments, recorded by the liberal group American Bridge, quickly attracted condemnation from Democrats, pro-immigrant groups and even the libertarian Competitive Enterprise Institute. The campaign of King's Democratic challenger Christie Vilsack said, “If we’re going to have a real discussion on immigration, we should start by acknowledging that immigrants are human beings."

But in an interview with Fox News Latino's Elizabeth Llorente published yesterday, King defended his rationale. "I’ve long used these examples. We’ve skimmed the cream of the crop off every civilization on the planet," he said. And while his previous analogy used bird dogs, this time he pointed to a different breed of dogs: "In my house, we have raised really good, high-quality Labrador Pointers; we’ve received the pick of the litter from all over the planet. You pick the vigor, the most perky.

"If someone is insulted by that, I don’t know that they belong in this country," he continued. "Jesus talked about animals and compared people to animals. I’m Catholic, my bishop is my shepherd and we are his sheep."

King dismissed the controversy over his remarks as "manufactured by my opponents" and said he's "not too worried" about political fallout. In fact, those trying to make hay over his comments are just trying to prey on Hispanics who may not understand what's going on, King explained:

"It’s such a rotten thing to do to a society that needs to pull together -- victimizing those who have a hard time understanding what’s going on. There are a lot of Hispanics reading, they need to know that the left are seeking to divide people and capitalize on it."

And King apparently wants to take Mitt Romney down with him. The presumed GOP nominee had one of the harshest immigration policies of any Republican presidential candidate, and his immigration adviser is none other than the author of Arizona's infamous SB1070 "papers please" law. All this makes King feel pretty good about the top of the ticket. "I disagreed with [Karl] Rove and [George W.] Bush then on immigration. I think Romney has a pretty solid position on immigration," he said.

In response to the new comments, Vilsack campaign manager Jessica Vanden Berg told Salon, "Instead of apologizing, congressman King has doubled down on this unproductive rhetoric. Just days after Focus on the Family and evangelical leaders from across the nation came together and called for a bipartisan solution that respects the god-given dignity of every person, congressman King continues to compare immigrants to dogs. That's not what we're taught in Iowa, and these aren't the values we expect from our elected officials."

But if the political heat gets too much for King here, it's not clear where he would go: "I’m too old to emigrate to Canada, they don’t want me up there," he told Llorente. On that, he's probably right.