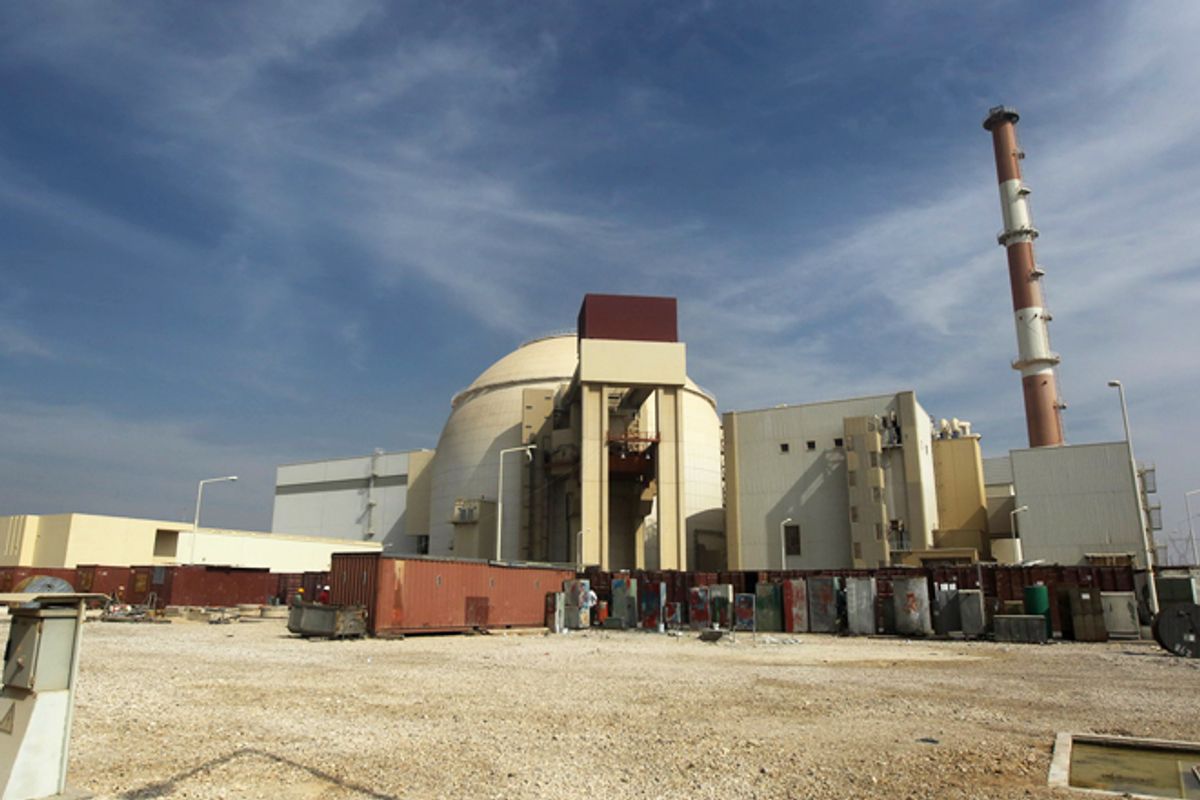 This month’s Vanity Fair has a feature on Israeli leader Benjamin Netanyahu. “An Israeli strike against Tehran’s nuclear facilities gone awry may pose the single greatest peril to his political future, which may be the biggest guarantee — more than American opposition to any move or the effectiveness of sanctions — that it won’t happen,” the article reads. Indeed, gradually and without fanfare, the possibility of a military strike against Iran, which only a few months ago seemed imminent, has lately receded from view. It seems that perhaps the U.S. and Israel came to their senses and realized that an attack on Iran would be disastrous.

The turning tide against a military strike is underscored by three new reports on the problems of an attack. Taken together, they suggest that significant parts of the U.S. establishment are pushing back against the notion that, in senior Romney adviser John Bolton’s words, “There is no doubt that Washington could shatter Iran's nuclear program,” and that “Iran's real options, post-attack,” would be “limited.”

First on the table is a monograph from the staunchly pro-Israel think tank the Washington Institute on Near East Policy. The report is called “Beyond Worst-Case Analysis,” suggesting that it intends to avoid what it calls “apocalyptic” conclusions about an attack on Iran. And yet, as former CIA analyst Paul Pillar notes, the paper’s ideas suggest that the “consequences would be very bad indeed.”  The report’s authors, Michael Eisenstadt and Michael Knights, write that Iran would “respond in a way that deters additional Israeli strikes and U.S. intervention.” They suggest Iran would strike against any attacking country, which even if it is meant to be “limited” could easily escalate into a full-blown regional conflict. Iran would want to make retaliation as “painful as possible” for Israel, employing direct and indirect measures.

It would use Hezbollah and other proxies to sabotage petrochemical infrastructure in the Gulf, and attack “commercial ships or elements of the U.S. Fifth fleet in the area.” In other words, it would attack the United States military. Iran also “would likely respond almost immediately with missile strikes on Israel, to punish it and deter follow-on strikes.” The Persian nation would attack Israeli military and civilian population centers with its hundreds of long-range conventional missiles. Hezbollah could launch thousands of rockets from Lebanon, and attacks could be forthcoming from Hamas, Islamic Jihad and even beleaguered Syria. Israeli or Jewish targets around the world would not be immune. The list goes on: terrorism against U.S. targets on several continents, attacks on U.S. personnel in Iraq and Afghanistan, kidnapping American citizens, strikes against neighboring countries, harassment of U.S. vessels in the Strait of Hormuz and a revitalization of the popularity of the Iranian government. And all of this, according to the report, is far from a worst-case scenario.

Following closely on the heels of the WINEP report is one from the Center for a New American Security, famous for its support for counterinsurgency campaigns. The authors state definitively that a “preventive military strike against Iran’s nuclear program by either the United States or Israel at this time is not the best option, and rushing to war would risk making the threat worse.” Contrary to popular belief, the Iranian regime is rational and could be deterred from using nuclear weapons, and in any case Iran “is unlikely to make a rash decision anytime soon” on whether to build a bomb at all. Iran’s rhetoric against Israel is just that — rhetoric. “That is the case today, and it would remain the case if Iran acquired nuclear weapons,” according to the report.

There is little chance, the report states, that an Israeli strike against Iranian nuclear facilities would be 100 percent successful, raising the possibility that Iran would retaliate using its residual arsenal. In addition, “an Israeli strike would likely prompt the Iranian regime to rapidly rebuild its nuclear program,” defeating the purpose of such a strike in the first place. In sum, “an Israeli strike would, at best, have limited effects and, at worst, increase the threat.”

The third outlet advocating a different direction on Iran may be the most important. The forthcoming issue of Foreign Affairs has a cover article by Columbia University’s Kenneth Waltz called “Why Iran Should Get the Bomb.” Published by the Council on Foreign Relations, the most important establishment think tank, Foreign Affairs is the most influential foreign-policy periodical in print. Leading up to the Iraq War, the journal published essays almost exclusively in support of the invasion. Given its reach, Foreign Affairs’ one-sided perspective on Iraq before 2003 must be counted as a significant editorial failure.

By commissioning a piece by Waltz, however, the journal seems to be trying to avoid making the same mistakes. The journal has already published widely discussed articles on both sides of the Iran issue, giving at least a more balanced view than it did with Iraq. Waltz is among the most influential international relations theorists in the world (tied for second, according to one survey), but he rarely writes for anything but academic journals. His new essay, the feature in the forthcoming issue, argues that the world would be better off if Iran gets the bomb. That argument may seem radical, but it is in keeping with Waltz’s long-standing arguments on the stability of nuclear weapons (arguments echoed by John Mearsheimer, among others).

Iran is no different. The country has good reasons to seek nuclear weapons, with Pakistan, Afghanistan and Iraq on its borders, and consistent threats coming from the U.S. and Israel. “It would be strange if Iran did not strive to get nuclear weapons, and I don’t think we have to worry if they do,” he has said. Deterrence among countries with nuclear weapons has a 100 percent effectiveness rate, so Israel and the United States have nothing to fear from a nuclear Iran — or any other countries, for that matter.

The new Waltz essay is sure to make a splash, and we should hope it does. Controversial though its larger claims may be, it helps bolster the case that an attack on Iran is both unnecessary and potentially disastrous. That might seem obvious, but to many Americans it isn’t. Together, the three new pieces help make the case persuasively.