Will the GOP crush Obama's DREAM?

How will Republicans respond to President Obama's decision to give young illegal immigrants legal status? 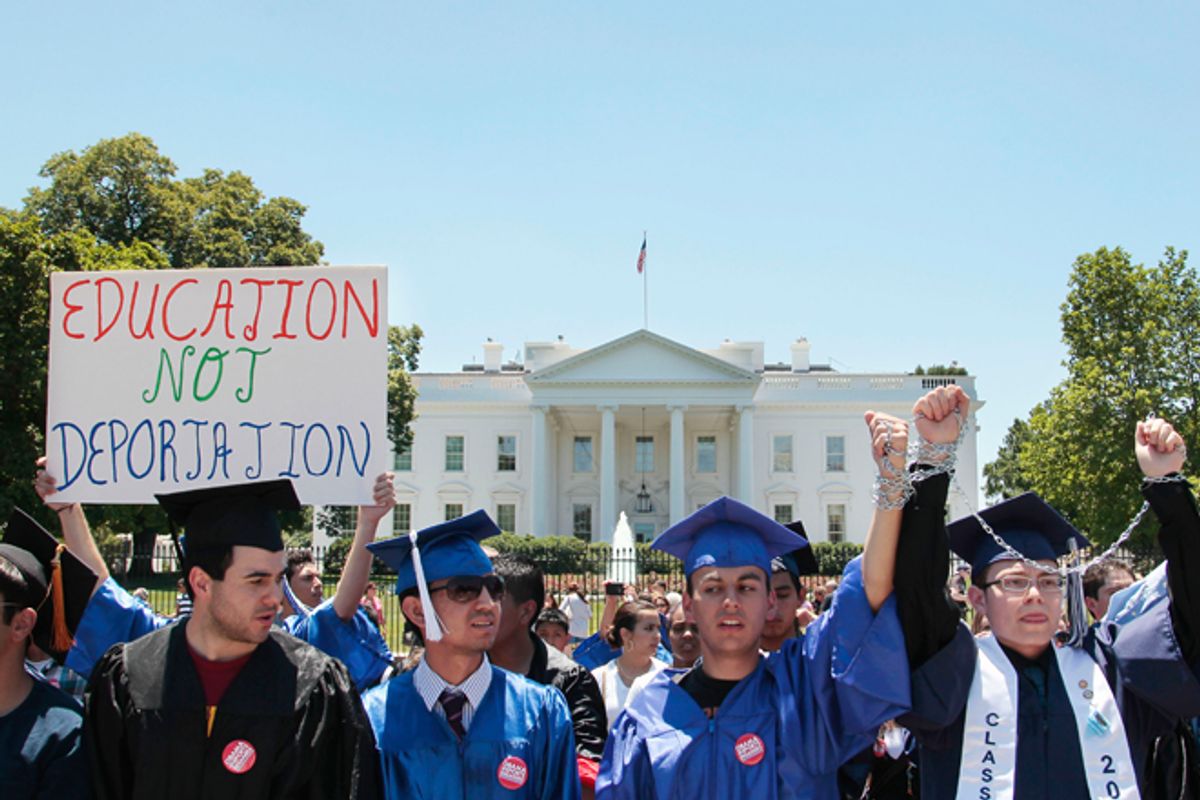 The Obama administration’s blockbuster immigration announcement this morning is a huge victory to progressives and immigration rights activists, and puts Republicans in a very awkward situation. It’s only a few hours old, but we’re already seeing how Republicans will likely respond to this move, which fundamentally changes the parameters of the presidential campaign on the key issue of immigration.

But first the policy: The administration will stop deporting young undocumented immigrants who meet certain criteria: They have to have graduated from a U.S. high school or earned a GED or served in the military, have no criminal record, be younger than 30 and have been brought to the U.S. under the age of 16, “by no fault of their own,” as Homeland Security Secretary Janet Napolitano said on a conference call with reporters this morning. These approximately 800,000 immigrants will have an opportunity to obtain work permits, which will give them legal status in the country. Essentially, the administration is using its executive authority to implement the DREAM Act, the much discussed policy than many Republicans used to support, but no longer do.

Now for the politics: The move puts Republicans, who are torn internally over immigration, and especially Mitt Romney, in a very uncomfortable spot. Romney has repeatedly said that he would veto a DREAM Act, if elected president, and Kris Kobach, his hard-right immigration adviser and the author of Arizona’s notorious immigration law, has said the candidate will not support anything that gives undocumented immigrants a path to legal status.

But DREAM-like policies are overwhelmingly popular. Just 1-in-10 Americans polled in a recent survey said they think that young people brought here illegally as children should not be allowed to remain in the country. Even three-quarters of Arizonans support it. Sen. Marco Rubio, the Cuban-American Republican from Florida, has attempted to bridge this gap by proposing a watered-down DREAM Act that Romney made noises about possibly supporting.

The new administration policy basically adopts the Rubio approach. The Democratic bill offered a clear path to full citizenship, Rubio’s did not, and neither does the administration’s move.

Two ways: politics and process. First, they’ll argue that this is nothing but a cynical political ploy to win Hispanic voters. “Dear God, let Romney not attack substance of immigration announcement. Ok to blast as blatantly political but express sympathy for kids,” tweeted Ana Navarro, who was John McCain’s national Hispanic co-chair in 2008 and remains active in GOP politics. “Politically, immigration announcement, equal to gay marriage change. Its about firing up base. O[bama] has Latino intensity/turn-out problem,” she added.

“It’s such a naked politically pandering move,” Fox News’ Monica Crowley said. She also suggested that it may be an attempt to “neutralize” Rubio if Romney selects him for the vice-presidential slot, or an attempt to dissuade Romney from picking him, because Democrats are afraid to face him.

The other line of attack will be on the process -- slamming Obama for circumventing Congress. “This is another example of executive overreach,” Rep. Allen West, the Florida Republican, said on Fox. “To have an unelected bureaucrat in Janet Napolitano coming out about a policy decision which will affect residency here in the United States of America ... this should have been brought up as legislation within the Homeland Security Committee both in the House and Senate. " He added, "This shows that we are getting away from a government that’s based upon consent of the American people, and we’re starting to live under a rule by edict or executive order.”

Matt Lewis, an influential conservative writer with the Daily Caller, tweeted, “That's why this is so sad. Rubio was working on persuading more conservatives on this issue.This totally undercuts that trend.” In other words, conservatives will now oppose the DREAM Act because Obama is for it. Obama should have waited for Republicans in Congress to come around.

Romney has yet to weigh in, but you can bet that it will follow one of these two tacks, if not both. So, setting aside the policy for a moment, will these political arguments work? Probably not. The politics argument was the chief push-back to Obama’s gay marriage announcement and that largely fizzled after just a few news cycles. The much-feared anti-gay opposition to that announcement never materialized, and now Obama’s embrace of LGBT rights seems to have been smart politics (again, setting aside the obviously good policy).

The process argument is also probably a loser. Both parties have tried to make these arguments in the past, but they never seem to stick. Most Americans just don’t care, or at least don’t know enough to care, about how something happened; they care more about the fact that it did happen. Republicans tried to sink the Affordable Care Act by attacking the fact that it was passed with “demon pass” but no one cares about that today -- opposition to it is motivated by policy (or rather misunderstandings about its policy). Republicans even used the demonic tactic themselves once they took control. Likewise, Senate Democrats have tried to earn sympathy points for six years by crying (legitimately) about Republicans’ unfair abuse of the filibuster. But there’s little evidence that average American voters care or will punish Republicans at the ballot box for making Harry Reid file for cloture so many times.