Jerry Siegel created a superhero when he was a picked-on, fatherless child dreaming of his own Lois Lane 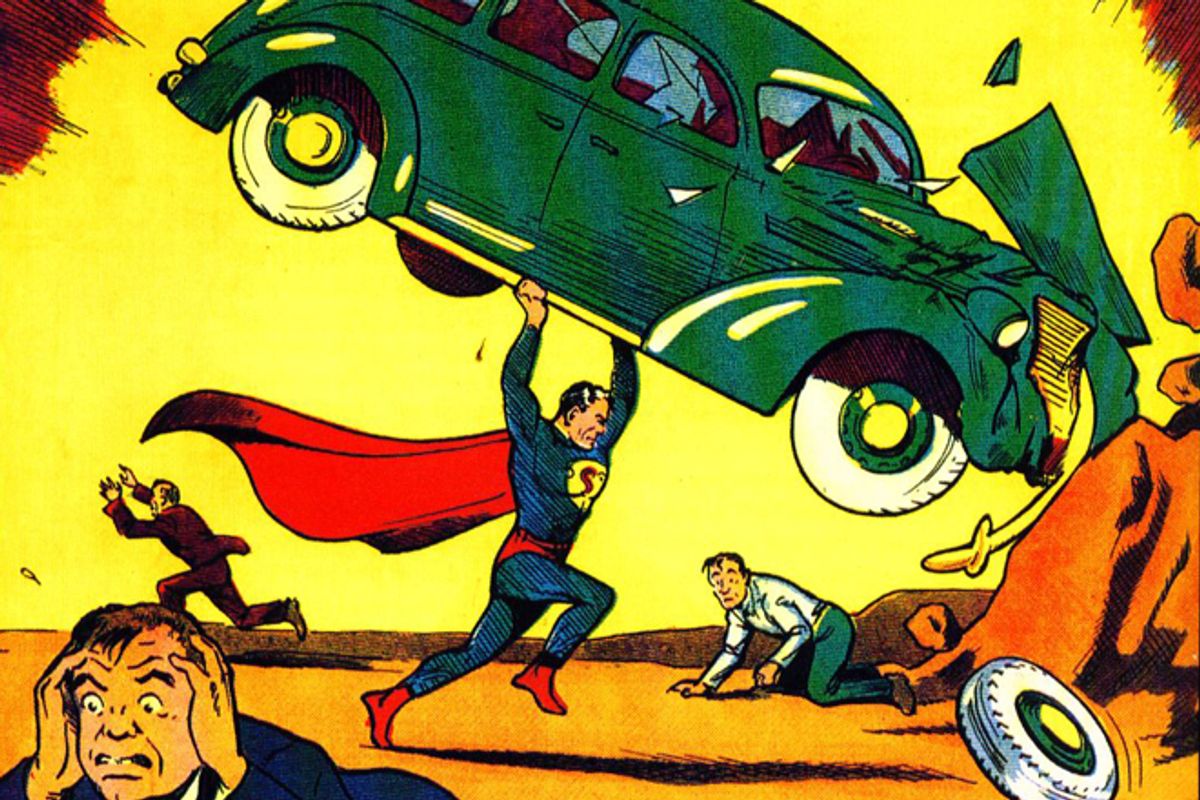 Excerpted from "Superman" by Larry Tye.

Legend has it that Superman was born under a fiery red sun on the futuristic planet of Krypton, in a crystal tower overlooking the Jewel Mountains and the Scarlet Jungle. But the legend has it wrong. Superman really was born under a hazy yellow sun in a gritty Jewish precinct of Cleveland, two blocks from the Hebrew Orthodox Old Age Home and down the street from Glenville High. Just ask Jerry Siegel. He’s the one who brought him to life there in the throes of the Great Depression.

Jerry Siegel happened to be born in a gritty Jewish precinct of Cleveland, too, in 1914. And being Jerry never was easy. His trouble began in first grade. The stubby six-year-old had proudly memorized the rules for asking to pee. You raised your hand; the teacher acknowledged you and said it was okay to go to the bathroom. The boy behind him did it. A pigtailed girl followed. But there was no reply when Jerry raised his hand. Finally the teacher turned his way: “What do you want?” He told her. “No,” she said. Maybe she thought he was faking. Maybe it was that he was short, shy, wore glasses, and was the child not of refined German Jews but of unwashed immigrants from Eastern Europe. Whatever the reason, his bladder swelled and a puddle formed under his seat. With other children pointing, the teacher descended: “Leave the room, this very instant! Go home!” “At an early age,” Jerry recalled decades later, “I got a taste of how it feels to be victimized.”

That sensation became a pattern. On Valentine’s Day, classmates addressed cards to one another, with the teacher handing them out as students awaited anxiously. The first year Jerry got a miserly one, from his sympathetic teacher. The next year he secretly inscribed a card to himself. Jerome the Loner, he thought. Jerome the Pariah. Jerome the Outcast. Schoolwork was equally problematic. The semester started with smiles and anticipation. “Happiness,” he would say, “vibrated all over the place. But then, when the grim business of cramming knowledge into one’s skull got down to business, interest in arithmetic, geography, etc. just slid off my brain, and oozed into a crack in the floor.” He got used to D’s and F’s – and to summers repeating the failed subjects, which “was even more dismal. While other kids enjoyed summer vacation, I had my nose rubbed into education.”

Recess, too, was a trial and oftentimes a terror for him. Tormenters were everywhere. Some tripped him as he tried to escape, others punched. His very name became a source of ridicule. “Siegel, Seagull, bird of an Eagle!” they would chant. If only he really could fly away. If only the girls hadn’t heard. He was too bashful to say a word to pretty ones like Lois Amster, the girl he had a crush on, but even the homely ones showed zero interest. “I hadn’t asked for the face or physique I was born with,” he wrote. “I had not sculpted my nose, or fashioned my chin, or decided how broad my shoulders would be, or how tall I would become. I looked searchingly into the mirror for a clue. The mirror refused to commit itself.” Doubts like those are part of growing up. Most kids outrun or outgrow them. Jerry’s stuck like a mark of Cain from grammar school all the way through high school, where he would turn up late with his hair flying off in different directions and his pajamas just visible under his pant cuffs and over his shirt collar.

With the real world offering no solace he created one built around fantasies. Mornings, he stood in the schoolyard until his classmates disappeared indoors, then he headed to the public library. Pulling his favorites from the tall stacks of books, he was transported into the dime-novel worlds of master detective Nick Carter, collegiate crime buster Frank Merriwell, and adventurers closer to his age and circumstance like the Rover Boys. Fred Rover and his cousins Jack, Andy, and Randy, may have been in military school, but that never kept them from exploring wrecked submarines or prospecting for pirates’ gold. On weekends, Jerry went to matinees at the motion picture theater. Western megastar Tom Mix made 336 films and Jerry stayed to the end of nearly every one. He also was an insatiable consumer of movies starring Douglas Fairbanks Sr. as Zorro, Robin Hood, and the Thief of Baghdad. And watching was not enough. Convinced he could replicate Mix and Fairbanks’s derring-do, Jerry darted in and out of traffic on the narrow roads of his Glenville neighborhood. “Those furious humans driving the cars, who yammered and glared insanely at me,” he said, “were mere mortals. But I . . . I was a leaping, twirling, gleeful phenomenon!” Back at home, with his hip healed after one of those glaring drivers sideswiped him, he climbed onto the roof of the garage holding an umbrella. “I opened the umbrella and leapt. Look out world, here I come! . . . Unexpectedly, the umbrella suddenly turned inside-out as I descended. I banged a knee, when I hit the ground. Just as I had abandoned berserkly dodging in and out between moving automobiles, I gave up jumping off the top of my garage.”

As freeing as it felt to mimic his idols, better still was concocting narratives starring Jerry Siegel. Not the shunned, tongue-tied adolescent the kids in the schoolyard saw, but the real Jerry, fearless and stalwart. The setting, too, was of his own making, leaving behind Glenville’s 25 Orthodox shuls and row after row of faded up-and-down duplexes. Crawling into bed at night with pencil and paper, he imagined faraway galaxies with mad scientists and defiant champions like himself. He loved parody, too, inventing characters like Goober the Mighty, a broken-down knockoff of Tarzan of the Apes. He went on daydreaming in the classroom, and his writing found its way into the high school newspaper, The Torch, and onto the pages of his own Cosmic Stories, America’s first science-fiction magazine produced by and for fans. He wasn’t popular, he wasn’t strong, but one thing he knew: he was inventive. Pointing to an empty Coke bottle, he told his cousin, “I could make up a story about that.” No theme stuck for long, he confessed in a later-life autobiography. And he still couldn’t decide whether good guys or bad made better protagonists.

Clarity came on the wings of his own tragedy. It happened on an overcast evening in June 1932, just after 8 o’clock, in a downtrodden strip of Cleveland’s black ghetto known as Cedar-Central. Three men whom police would describe as colored entered Michel Siegel’s second-hand clothing store, one of the few Jewish businesses left in a neighborhood populated by barber shops, billiard parlors, and greasy spoons. Michel was ready to head home to his family but now he couldn’t. One man asked to see a suit, then walked out without paying; another blocked the owner’s path. Michel, a slight man whose heart muscle was weaker than even he knew, fell to the floor. A month shy of his 60th birthday, he stopped breathing before medics could get him to the hospital. His wife Sarah was a widow now, on her own with three girls, three boys, and next to no savings. Jerry, who was her youngest, took the loss of his father the hardest. The boy who had been bullied was bereft. Sitting on his dad’s knee and being rocked up and down had been one of Jerry’s few safe havens. “Bliss,” he called it later. “Supreme rapture.” Now his father was gone.

The world of make-believe seemed more alluring than ever to Jerry, who was not quite eighteen. What had been a series of disparate characters with no focus or purpose now merged into a single figure who became a preoccupation. He called him The Super-Man. Jerry’s first story, written shortly after his father’s death, envisioned the figure as endowed with exceptional strength, telescopic vision, the capacity to read minds, and a resolve to rule the universe. Over the months that followed, this character dropped “the” and the hyphen, along with his evil inclinations, becoming simply Superman – a bullet-proof avenger who beat back bullies, won the hearts of girls, and used his superpowers to help those most in need. And who, in the only artwork that survives from that first imagining, soars to the rescue of a middle-aged man being held up by a robber.