His new movie about a rape survivor and his estranged son is supposed to be funny, but radiates pain and rage 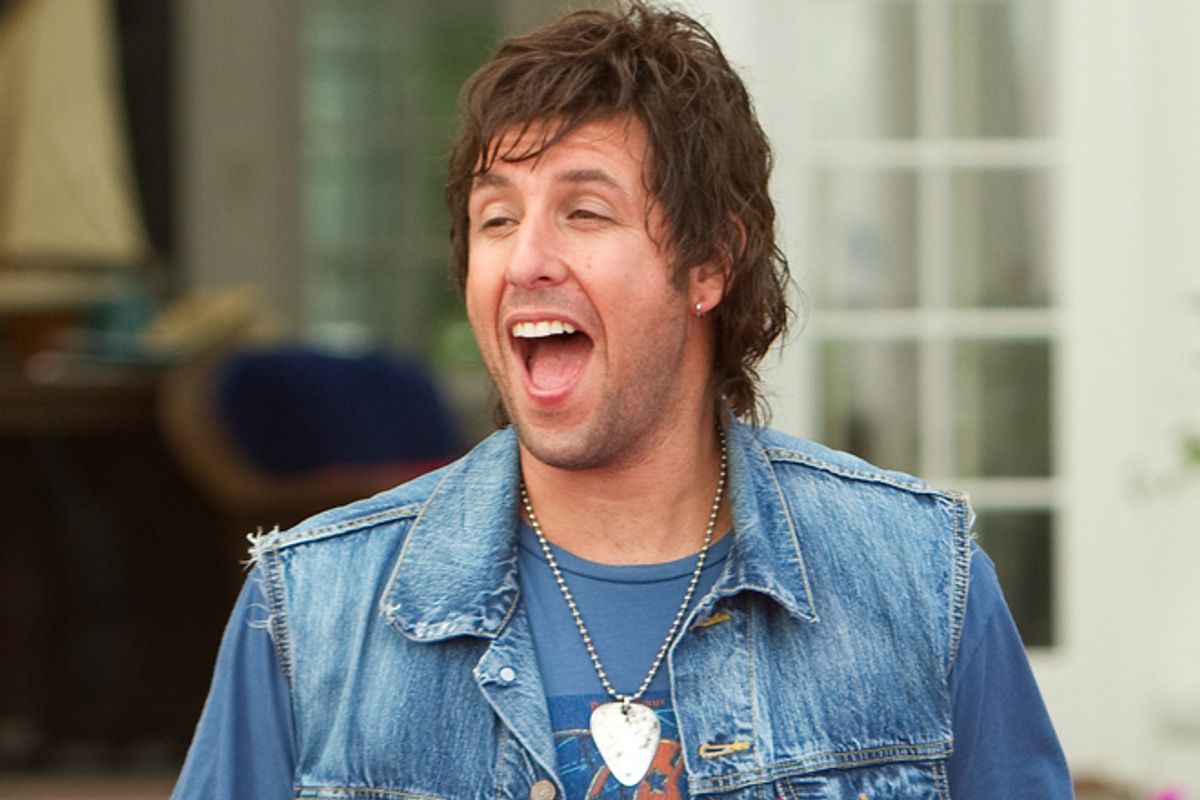 Having recently endured "That's My Boy," Adam Sandler's sudden swerve into post-Apatow, hard-R comic raunch, I have a strange but undeniable reaction: I kind of feel bad for the guy. That's clearly an inappropriate emotion to direct at someone who is rich and famous and has been able to write his own ticket in Hollywood for many years, but I can't quite help it. Sandler's certainly not the only comedy star who has tried and failed to make the Tom Hanks/Robin Williams transition to A-list leading man -- see also Carrey, Jim, career of -- but I detect a distinctive mixture of anger and pathos in his case. We didn't go to see "Punch-Drunk Love" or "Spanglish" or the 153-minute Apatow-Sandler mess-bomb "Funny People" in sufficient numbers to rescue Sandler from doing gags about barf and semen on a wedding dress, and now he's gonna make us freakin' pay.

There's something sick and desperate about "That's My Boy," in which Sandler, quite literally, plays a rape survivor trying to reconnect with his illegitimate and damaged adult son, who has moved away and changed his name. Comedy gold, right? (I know "rape survivor" is inflammatory language, and yes, an underage boy having sex with a female teacher -- the scenario here -- is a more ambiguous situation than the other way around. But it's still not a 100 percent rockin' idea, and legally and morally that's the right term.) This film is an especially toxic blend of the condescension, idiocy and sentimentality that characterizes almost all of Sandler's recent work under his Happy Madison label. It points you toward the irresistible conclusion that for all his success Sandler feels only contempt for his audience and tremendous insecurity about his own stature in the comedy universe.

Let me back up for a sec and make clear that, even in "That's My Boy," I was reminded that I find certain things about Sandler commendable. Just not his movies or his persona or his career as a whole. He has an appetite for absurdism, and a gift for the almost unnoticed throwaway gag, that can definitely be amusing in small doses, and you get the general sense that in real life he's probably a mensch. He casts Vanilla Ice in this movie, for example, playing the washed-up white rapper Vanilla Ice, now a fry cook at a Boston fast-food joint. At first you're like, OK, this is 30 seconds of "Ice Ice Baby" and then we're moving on. But no! The fictional Vanilla Ice in this movie is a fleshed-out character with a back story, a place to live (in the projects) and a penchant for bong hits, and the real 44-year-old Vanilla Ice turns out to be an agreeable and charming screen presence with a lively sense of humor. He might get some actual work after this; Sandler did the dude a solid, no question.

As is customary in Sandler's movies -- this one's directed by Sean Anders, who seems to have taken over from Sandler's longtime factory foreman, Dennis Dugan -- there's a lot of random pop-culture stuff around the edges of the picture that's more fun to read about than to see. I'm not an NFL fan, so I didn't grasp until a day later that the guy who plays a shady storefront lawyer obsessed with Boston sports heroes in general and the New England Patriots in particular is actually Rex Ryan, coach of the New York Jets (the Patriots' biggest rivals). ESPN sportscaster Dan Patrick -- last seen in the Sandler oeuvre emceeing a hula contest between Jennifer Aniston and Nicole Kidman in "Just Go With It" -- is on hand as a sleazy reality-TV host. James Caan and Susan Sarandon have embarrassing bit parts, the former rocking a dreadful Irish accent and the latter making finger motions customarily associated with underage Thai prostitutes. Vanilla Ice isn't even the only '80s celebrity playing himself; his co-worker at the fast-food stand is one-time kid star Todd Bridges of "Diff'rent Strokes," depicted as a foulmouthed drug abuser. There's also a slimy tycoon type played by Tony Orlando, and if you're in the target audience for this movie, you won't have the slightest idea who that is. (I honestly thought Tony Orlando was dead, and that this was a washed-up Tony Orlando impersonator. Sorry about that, T!)

It's not exactly a news flash that Sandler isn't making movies for me or people like me, but even by the standards of his lackadaisical, vulgar comedies, "That's My Boy" plumbs a new low. (Admittedly, it's probably not worse than the insulting "Grown Ups" or the bilious and hateful "Jack and Jill," although it's dirtier than either. Suddenly "You Don't Mess With the Zohan" and "I Now Pronounce You Chuck & Larry," both of which are basically terrible, look like understated works of Lubitsch-style comic genius.) Sandler graduates here from the PG-13 poop-and-vomit humor that has long been his specialty to racier, penis-oriented wit. This feels way too Farrelly brothers circa 1998, and is not a natural fit, partly because no one (I feel confident about this) really wants to think that much about Adam Sandler as a sexual being. A lot of the jokes in this movie, however, resolve to familiar misogynistic themes: Fat chicks are fat, old chicks are old and ugly chicks are ugly, but all of the above are preferable to pretty women, who are duplicitous bitches.

I'm genuinely curious about the strategy behind the construction of Sandler's screen persona, at least in his recent comedies: Why does he have to play a character who is universally agreed to be the coolest guy in the universe (except by squares and pussies)? Most comic actors from Charlie Chaplin and Buster Keaton onward have thrived on undercutting themselves, making themselves look flawed and silly. It's a way of engendering audience identification, of making us like them and root for their eventual triumph. Sandler seems to shoot in that general direction here, after playing rich, famous, successful and thoroughly impervious guys in his last several movies, but he can't pull it off.

Donny Berger of "That's My Boy" is halfway supposed to be an '80s loser, with a rusted-out Pontiac Fiero, a shag haircut and Van Halen on the tape deck. But even his mode of being a loser is awesome; he was once famous for being the kid who nailed (and impregnated) a hot teacher at his South Boston middle school, and now he's broke and his best friend is an enormous stripper called Champale. But exactly why Donny is broke seems a mystery, given that dudes of all social strata are drawn to his clarion call of "Whazzup!" and large-breasted women in hot tubs seem to find his juvenile sex talk irresistible. It's only his pantywaist son (Andy Samberg), with his obscure resentment at having been born out of a tabloid scandal, named Han Solo and then abandoned, who fails to appreciate that Donny is the wickedest dad you could ever want. Of course all he needs is a single night out drinking, whoring and vandalizing with Pop and Vanilla Ice -- that's all every boy needs, after all.

Yes, you're right; I'm taking this all too seriously. Sandler's brand of comedy involves no crimes against humanity, and if people want to pay good money to watch him beat off to a picture of a polyester-suited grandma, I guess Chief Justice Roberts would say that's why we have the First Amendment. It's just that there's something bitter and weird and unsettling about the place where Sandler seems to be right now. He's definitely capable of better -- maybe not of great, but let's say of pleasant mediocrity -- and his current work feels like a classic cry for help. I'm not sure which possibility is worse: That his screen persona is completely cynical, calculated to appeal to the ultra-fragile egos of teenage boys, or that he actually needs this reassurance on a personal level, because he's a 45-year-old comedian doing jism jokes and hating himself for it.