Can't a capitalist be moral?

As a business school professor, I've noticed a shortage of ethics in my field. It's time to do more 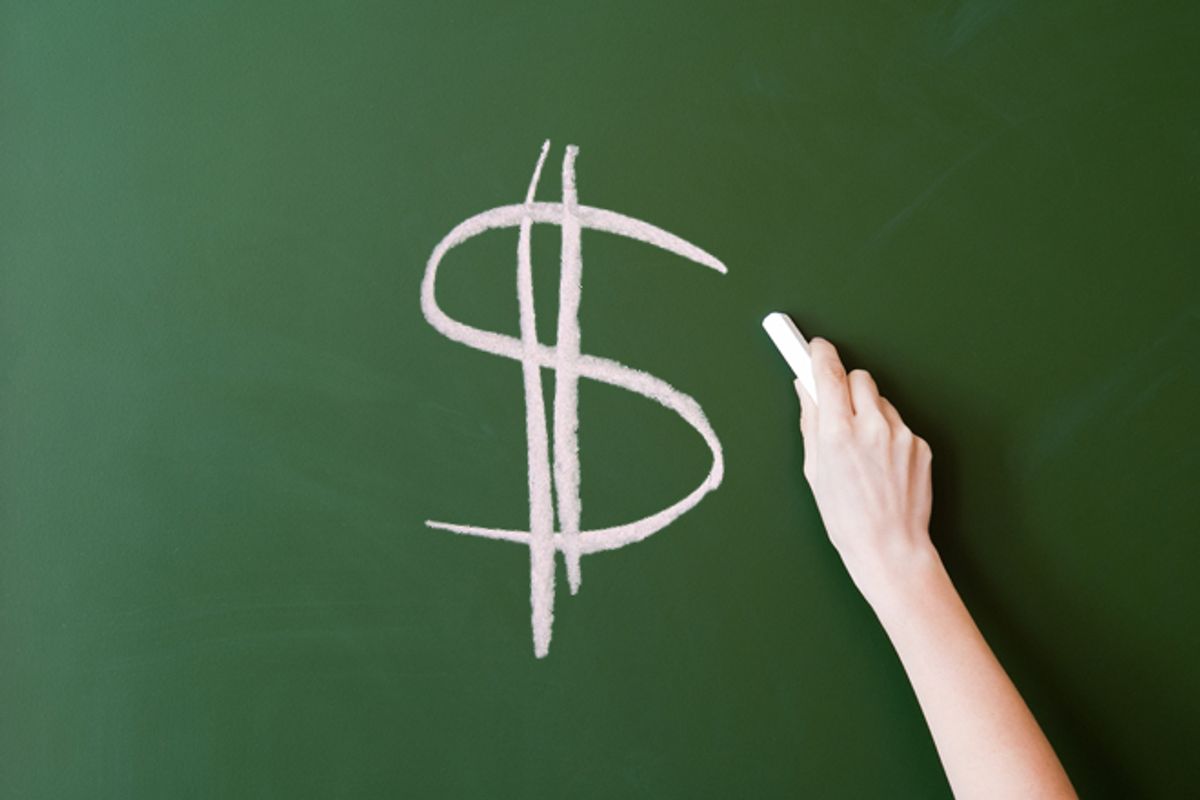 This is an adapted excerpt from the new book "A Capitalism for the People".

At the University of Chicago’s Booth School of Business, where I teach, students don’t just register for classes — they bid for them. True to market principles, Chicago Booth organized this system to maximize student satisfaction. By creating a market in which students compete for the opportunity to take classes with the professors they like best, Chicago Booth ensures the class assignments that maximize students’ desires.

To function properly, this market, like all markets, requires not only official rules but social norms as well. For evidence of the importance of social norms, consider a problem we encountered with the bidding system. The system gives each student a fixed number of bidding points at the beginning of his two-year program. Students can then use these points to bid for the courses they like. The “cost” of a given course is set by the number of students bidding for it and how many points they bid: less popular courses go for zero points, while more popular ones require students to dip into their precious points. When the demand for a course exceeds the supply, only the students who made the highest bids get to take the class. Each quarter features three rounds of bidding; after each round, students who win spots in a class can, if they like, give those spots to other students in exchange for points.

When this tactic — arbitrage, an economist would call it — became known, the faculty was divided on how to treat the students who had taken advantage of it. Some were furious and wanted to punish the students who gamed the system. Others thought that the students should be not punished but congratulated for their cleverness. I was not so sanguine. I thought it was unfair to punish the students, since they hadn’t broken any rule. But their opportunistic behavior had undermined the system, creating no benefits for the rest of the business school community and in fact producing a net loss.

This apparently simple question — Should we, as teachers, condemn, condone, or praise their behavior? — raises a broader one. Should economists be ivory-tower scientists who teach facts and not morals? Or should we take a moral stand — and if so, which one?

Most successful firms tend to develop a corporate culture that centers on key values that are shared by the employees and enforced throughout the organization. Integrity, for example, is a value identified by 70 percent of the companies belonging to the Standard and Poor’s 500 Index.

In part, these values are meant to make companies look good, but there is more to them than that. Employees often face trade-offs between the company’s interests and their own. Should I push for higher sales at the end of the quarter to make my yearly bonus, even if this reduces the quality of the product? Should I overlook the declining value of the company’s assets, so that the reported profits are not affected, leading to a higher bonus? Should I discount my product so that I can temporarily boost sales and sustain the perception of high growth that supports my stock price (and thus my stock options)? While incentives can be designed to minimize these problems, they can hardly eliminate them; the problems are inevitable, short of a complete identification between the individual goals and the corporate goals. So companies create values that draw the line beyond which trade-offs aren’t acceptable. When a company touts excellence as a value, for instance, it communicates to its employees that no compromises will be allowed in the pursuit of excellence. The same could apply for integrity and other values.

The role of these values is twofold. First, they establish a rule of behavior for employees who might not know how to operate in certain situations. Second, they make it easier to screen out employees whose own values are most at odds with the company’s. It is much easier for a firm to enforce a zero-tolerance policy than a more nuanced one. Thus the corporate world does recognize the benefits of internal norms.

When it comes to market-wide norms, however, no company is big enough to reap the benefits of creating a better market system. Why should any company care about making norms that enhance the functioning of the whole market? Companies, as we saw earlier, prefer to consolidate their market power. So who does have an interest in creating market-wide norms?

Business schools. They have the greatest interest in the long-term survival of capitalism, especially the superior American version of capitalism. They are — or should be — the churches of the meritocratic creed. So they should lead the effort to impose some minimal norms for business — norms that discourage behavior that is purely opportunistic even if highly profitable. For this reason, we should have frowned on the Booth students who exploited the loophole in the bidding system. We should likewise frown on behavior that we recognize as detrimental to the long-term survival of the free-market system.

Asking business schools to stigmatize all behavior that does not maximize welfare would be absurd. They shouldn’t be expected to shame or criticize a company for using the market power that it has legitimately acquired through innovative patents. They also shouldn’t be expected to denounce a company for taking advantage of the tax loopholes present in the system. I regularly teach my students how to exploit the tax benefits associated with corporate borrowing, and I don’t consider it unethical. The preferential tax treatment of debt is —  at least in principle — designed to stimulate companies to borrow more, just as the deductibility of mortgage interest is designed to subsidize people who borrow to buy a house. While I do not consider it a good law, I do not feel bad about advocating its use as long as it is on the books.

There is a difference, however, between taking advantage of existing tax loopholes and lobbying aggressively to have those tax loopholes created or expanded. What about marketing policies targeted to prey on addiction or to induce young customers to smoke? Is making money the only metric we should reward and admire in business leaders?

Business schools have a powerful enforcement mechanism: the way they treat their alumni. The schools celebrate their most prestigious alumni, for instance, and they reward the others by providing access to a valuable network of connections. In awarding prizes to outstanding alumni who adhere to economically useful norms, and by expelling from the network those who do not, they could send a powerful message. But they generally choose not to do so. In fact, they often seem to tolerate, if not foster, business behavior that is immoral and sometimes even illegal.

Consider the insider trading case involving the Galleon hedge fund. Raj Rajaratnam was convicted and sentenced to eleven years in prison; McKinsey director Anil Kumar pleaded guilty, and Rajiv Goel, a managing director of Intel, pleaded guilty too. They had all been classmates in the same business school earlier in their lives. Was this just a coincidence?

Unfortunately, academic research seems to suggest that university friends, such as Kumar, Goel, and Rajaratnam, may well share confidential information. The research shows that portfolio managers place larger bets on firms with directors who are their college friends and acquaintances, earning an 8 percent higher annual return on these investments. A benign interpretation of these results is that college friends know each other well; thus a portfolio manager would have an advantage in judging the quality of a CEO he went to school with. But this benign interpretation is difficult to reconcile with the finding that the positive returns are concentrated around corporate news announcements. Why would your intimate knowledge of the CEO’s personal qualities help you earn a better return  ... right around the time of a corporate news announcement? Isn’t it more likely that some information has leaked your way? Business schools should do more to eradicate such behavior.

While insider trading is illegal and should be punished by the law, behaviors that are legal but not socially desirable could be effectively stamped out with a shaming from the business community, including the business school alumni network. Money should not be the only criterion of success by which alumni are recognized. A business school would never honor a businessman who made his fortune selling pornographic movies. Why should it honor somebody who has become wealthy preying on people’s addictions or marketing a financial instrument designed to dupe unsophisticated investors? In fact, business schools should actively shame this kind of behavior by criticizing it publicly.

Most business schools do offer ethics classes. Yet these classes are generally divided into two categories. Some classes simply illustrate ethical dilemmas without taking a position on what people are expected or not expected to do. It is as if students were presented with the pros and cons of racial segregation, leaving them to decide which side they wanted to take. Other classes hide behind corporate social responsibility, saying that social obligations rest on firms, not individuals. I say “hide” because a firm is nothing but an organized group of individuals. As the 2010 Supreme Court decision Citizens United v. Federal Election Commission affirms, we should not impose burdens on corporations that we do not want to impose on individuals. So before we talk about corporate social responsibility, we need to talk about individual social responsibility. If we do not recognize the latter, we cannot talk about the former. Business schools should stand up for what they think is the individual responsibility of a good capitalist.

Adapted with permission from "A Capitalism for the People: Recapturing the Lost Genius of American Prosperity," by Luigi Zingales.  Available from Basic Books, a member of The Perseus Books Group.  Copyright © 2012.

Luigi Zingales, the Robert C. McCormack Professor of Entrepreneurship and Finance and the David G. Booth Faculty Fellow at University of Chicago’s Booth School of Business, has been involved in developing the best interventions to cope with the aftermath of the financial crisis. His research has earned him the 2003 Bernácer Prize for the best young European financial economist, the 2002 Nasdaq award for best paper in capital formation, and a National Science Foundation Grant in economics. His work has been published in the Journal of Financial Economics, the Journal of Finance and the American Economic Review. He lives in Chicago.