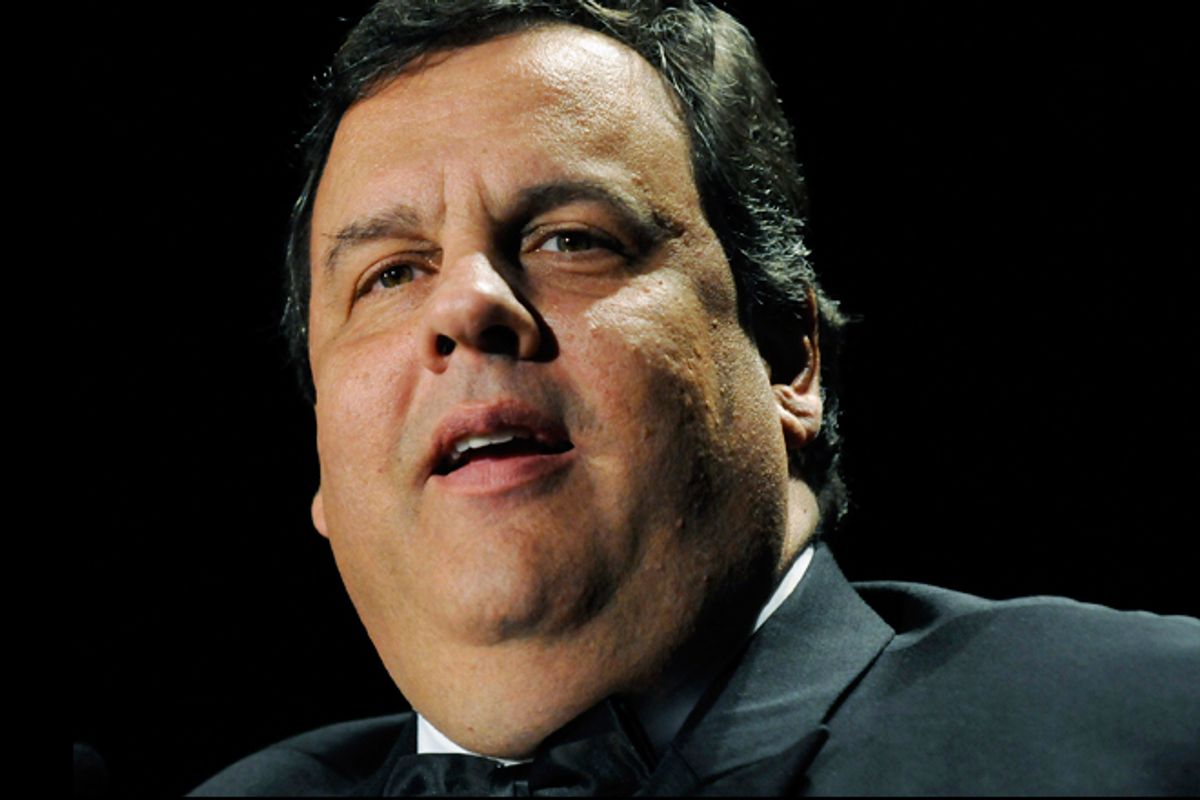 The halfway house network has flourished in recent years, with 10,000 prisoners being transferred into the system annually – and, as Dolnick reports, with hundreds of them taking advantage of minimal security to escape, sometimes going on to commit violent crimes. Leaders from both parties have championed the halfway house system, but here one company and one state official stand out.

The company is Community Education Centers, which receives about 70 percent of the $105 million that the state and its 21 counties spend on halfway houses each year. The official is Christie, who once lobbied for Community Education and whose close friend and former law partner (and the man who brought Christie into Bush 43 world, ultimately leading to Christie’s career-making appointment as U.S. attorney) now serves as a senior vice president with the company. Christie himself went to a Community Education facility in 2010 and said:

“Places like this are to be celebrated. A spotlight should be put on them as representing the very best of the human spirit. Because as you walk through here, as I’ve done many times, what you see right before your very eyes are miracles happening.”

Community Education has done very well under Christie, but as Dolnick reveals, some very bad things have been happening. In the two-and-a-half years he’s been governor, 1,300 inmates have escaped, with nearly 100 still at large.

The most disturbing escape story involves David Goodell, who was jailed after attacking and threatening to kill an ex-girlfriend in 2008. Goodell already had a record at that point, but in early ’10 he was transferred to a halfway house anyway, and that summer he faked an illness, was taken to a nearby hospital and escaped to freedom from there. Shortly thereafter, he strangled to death a 21-year-old woman with whom he’d been exchanging letters. The incident is awful enough, but there’s also no sign that the Christie administration did much in response:

Ms. Tulli’s family had believed that the inquiries meant that the administration would reform the system. But nearly two years later, the family is still waiting for the findings.

Community Education said it had done an informal investigation and found no wrongdoing by the company. “It would be grossly irresponsible” to say the halfway house was in any way at fault, the company said.

“People have to be held accountable for their own behavior,” said Dr. Mackey, the company’s senior executive.

David W. Thomas, executive director of the State Parole Board, said it had conducted an inquiry, but he would offer no details.

Asked for a copy, Mr. Thomas said, “There is no actual document.”

Interestingly, the Times series comes just as Newsweek is rolling out a story about Christie’s apparent interest in the No. 2 slot on Mitt Romney’s ticket. There are lots of reasons why Christie might not be a smart pick for Romney – his tendency to upstage and undercut Romney, his obvious desire to position himself for a future presidential race – but the halfway house revelations may be the strongest deterrent.

In a way, the Goodell case amounts to Christie's own (non-racially charged) Willie Horton problem. Horton, of course, was the convicted murderer who was released from a Massachusetts prison on a weekend furlough and held a young Maryland couple hostage, raping the woman. Michael Dukakis was governor when this happened and paid dearly for it in his 1988 presidential bid.

Like Christie with halfway houses, Dukakis hadn’t actually started the weekend furlough program – Republican Gov. Frank Sargent had – but the incident did serve as a vivid indictment of his leadership. How could he let a program like that go on at all? In the next campaign he runs, whether it’s for vice president this year, reelection as governor in 2013, or president in 2016, the same question will be asked of Christie over and over again.