A new novel feeds our curiosity about an icon and her real Game of Thrones. Was she the first modern woman? 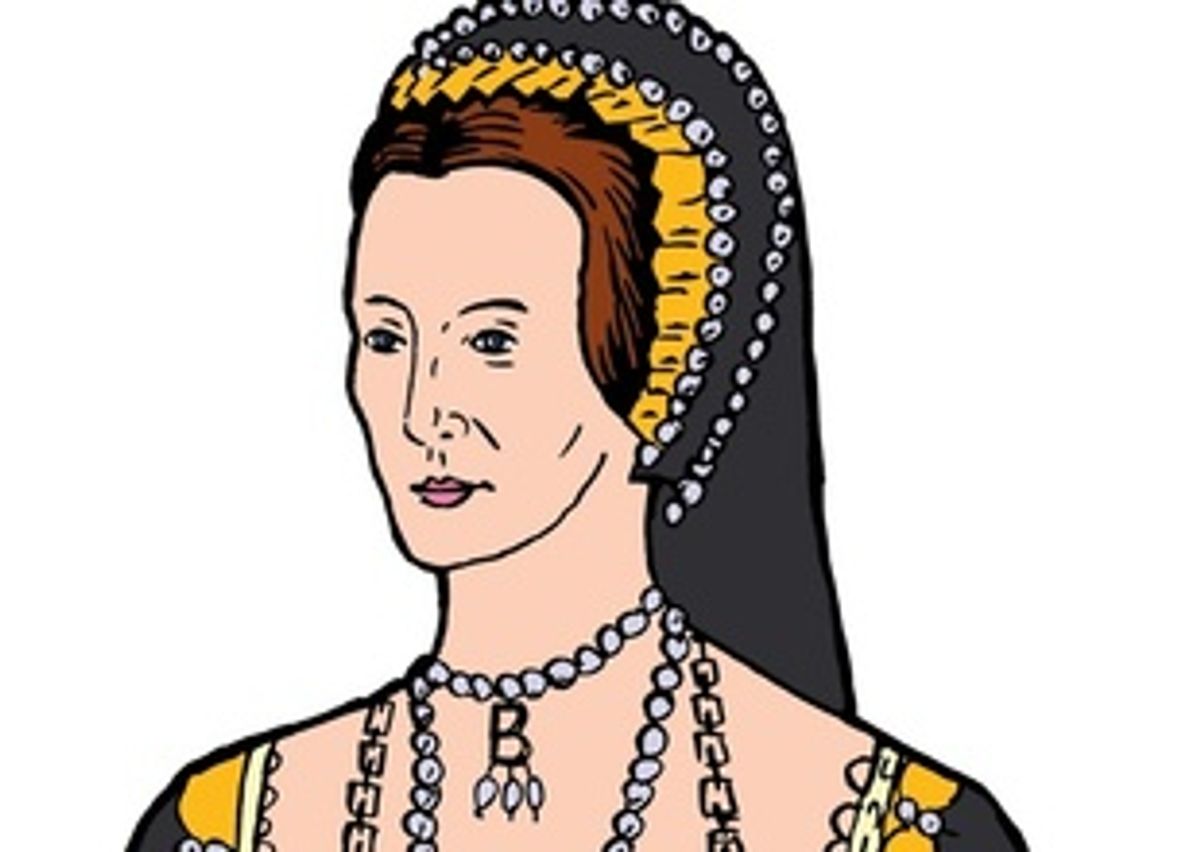 Beheaded for treason, the second wife of Henry VIII was said to have seduced hundreds of men. To have birthed a monster fetus. To have three breasts. Six fingers. Some called her a martyr. An intellectual. A victim of tyranny. A mortal enemy of the Church of Rome.

Since the late spring day in 1536 when a French swordsman sent her reeling from this world, we've been fascinated by the queen whose love affair rocked history when Henry split from the Pope by divorcing his first wife to marry her. She has been reborn in our imagination many times. The last decade's Tudormania explosion brought us new Annes in Philippa Gregory’s The Other Boleyn Girl (filmed as a motion picture starring Natalie Portman in 2008); Showtime’s The Tudors; and even revivals of an Italian opera, Anna Bolena.

Hilary Mantel’s harrowing new novel Bring Up the Bodies, a follow-up to her best-sellingWolf Hall (2009), gives us Anne through the cool and canny lens of Thomas Cromwell, a close adviser to Henry VIII who engineered the queen's downfall with relentless calculation. She even has her own Tumblr page.

Questions whirl across the centuries. Anne, what motivated you? Did you love the king? Were you devout in your faith? How did it feel to miscarry a baby and find yourself on a scaffold three months later, condemned to death by a king who pursued you for years?

Anne Boleyn’s story whets our appetite through its melodramatic ingredients: sex, royalty, intrigue, and brutality. It also fascinates us for occupying the alchemical moment in England when the High Middle Ages was transforming into the Renaissance, papal dominance was giving way to Protestant independence, and feudalism was lurching toward capitalism.

As Americans, the Tudor world has special significance as the progenitor of our own. Early colonists carried their inherited Tudor-era suspicion toward monarchs and affection for the bourgeoisie to our shores, setting up towns and governments according to their Tudor predilections. We see a bit of our own turbulent world in the one they left behind– a Hobbesian jungle where life was “solitary, poor, nasty, brutish and short." Anne’s time was as rife with corrupt monks and courtiers as ours is filled with greedy politicians and financiers. In such worlds, power is everything, and life seems uncertain.

Apart from the familiarity, there is also something arrestingly avant-garde about Anne Boleyn. She could not fit neatly into the script of her time. She wandered off the page, chastising her overlord and cracking sardonic jokes from her prison cell. She seems a person of flesh and blood, brimming with thoughts and emotions generally erased in the flattened visages that greet us in the portrait line-up of Henry's six wives.

Women, in particular, may see a glimpse of ourselves in the figure stretched on the rack of the insuperable contradictions of femininity that still torture us. Virgin and temptress. Mother and lover. Wise woman and witch. Dependent and dominatrix. We might identify with her plight, every arrow poised against her as she plays high-stakes poker in a man’s world, her intelligence always read as conniving, her ambition as manipulation. We shudder at the unceasing demand that she be, above all things, a reproductive Superwoman, birthing children of the correct sex under unimaginable duress. Never mind the hormones. The grief for the lost babies. The knowledge that her husband was execution-happy as no English monarch before or after.

Anne’s story might be a nightmare, Technicolor version of our own. We want to understand the snare that caught her because somewhere, underneath the trapdoor, the demons that set upon her have never fully quieted.

Joan Kelly offers tantalizing clues in her essay, “Did Women Have a Renaissance?” (1977). She illuminates the clashing cultures of courtly love and kingly privilege that turned Anne -- by most accounts an intelligent, charismatic, fashionable woman whom King Henry adored – into a wife so hated that he would give her the distinction of being the first English queen to be tried and executed.

Women in the Tudor era, as Kelly explains, were dancing on the knife-edge of a transition that would not be kind to them. Anne was cut to pieces by it.

We are taught to think of the Renaissance, with its burst of art and culture, as a time of expanded possibilities for human beings. But Kelly argues convincingly that this was not so for women. The High Middle Ages, with its tradition of courtly love that reflected the bonds of reciprocity between vassal and lord, offered a much friendlier playing field for women---particularly those in the nobility.

The courtly love ideal, stoked by one of medieval Europe’s most powerful women, Eleanor of Aquitaine, and in the writings of poet Marie de France, provided a script for women to freely express their sexuality and openly flout the conventions of patriarchy. In courtly literature, the relationship between the knight and his lady was a two-way street. The demand for chastity was put aside, as was the need for the legitimacy of children. Feudal values, based on a system of private jurisdictions, fed the possibility of love outside the bounds of marriage. Women shaped the courtly love ideal—and they could because they had real power in the feudal realm, not only as patrons of the arts, but as political players and economic actors. Feudal conventions in many places held that women could both inherit and manage property.

Anne Boleyn, who spent her formative years abroad, saw women who embodied this independence and power. Susan Bordo, author of the forthcoming book, The Creation of Anne Boleyn, describes her teenage years as “dominated by some of the most independent, influential women in Europe, first (for two years) the sophisticated and politically powerful Archduchess Margaret, regent of the Netherlands, and then, during her seven years in France, Marguerite of Navarre, King Francis’ sister.”  Marguerite, Bordo notes, surrounded herself with reformist intellectuals and operated as a kind of “shadow-queen” at court.

When Anne arrived at the court of Henry VIII as a lady-in-waiting to Queen Catherine of Aragon, she knew how to charm – and also how to think and act forcefully. But the times were a-changing. A writer like Thomas More, a major figure in Henry’s court, could promote equal education for men and women in his Utopia (1516), but the humanist scholar had little use for female sexuality and political power. Bourgeois writers attuned to the demands of the mercantile and manufacturing economy set about shrinking the personal and social options for women. Sexuality was to be regulated, religious devotion encouraged, public life curtailed. Patriarchal family values were restored. For women, love must lead to marriage and it had better not stray beyond that boundary. Among noblewomen, “unseemly” physical activities like riding or handling weapons were discouraged. The Virgin Mary became the ideal woman – something Anne's daughter Elizabeth I would later exploit in her embrace of chastity and virginity.

The despotic ruler of the newly emerging state demanded subservience from all and set himself to suppress the feudal privilege of his vassals, a model of subordination that would color the relations between men and women. New laws governed membership in a hereditary aristocratic class. Legitimacy was now everything. The monarch’s power was construed as symbolic of God, and his wife was to be his handmaiden – not his ladylove. As the ideal of love as mutuality and reciprocity declined, love became, in Kelly’s words, a “narcissistic experience.”

Henry fancied himself a Renaissance ruler, but he was still touched by the ideals of courtly love – jousting away in the tournament, his lady’s favors tied to his lance. He was both a romantic and a despot. In the stages of his relationship with Anne, he seems to read from one cultural script, then discard it for another.

In courtship, Henry is the feudal knight, pledging himself to be Anne’s servant and writing letters that praise her hot body. She is Guinevere to his Lancelot – a lady to celebrate, deserving of homage. Gradually, as the divorce decree from Catherine fails to materialize, Anne morphs into something more akin to the early Renaissance style of Dante’s Beatrice – a love object, but one who inspires a certain frustration. Anne may or may not have refused to have sex with Henry until they were married, but there was an awful lot of waiting around. Talk of touching Anne’s pretty breasts turned to talk of God and what He wanted from the union. And what it would mean to England.

Finally, when Anne becomes queen, the Greek mold favored by Renaissance writers takes over Henry’s perspective. Aristotle – a favorite of the period -- views woman as a defective man. She is knocked from her feudal pedestal. Something to be feared and shunned. Why does she display her emotions? Why does she meddle in affairs of state? What is wrong with her womb? Is she a witch? As wife – especially a wife who can’t deliver male children! -- Anne becomes something degraded, unnatural.

“How did she look, the women will ask. He [Cromwell] will be able to say she looked pale, but unafraid. How can it be to enter that great chamber and to stand before the peers of England, all men and none of them desiring her? She is tainted now. She is dead meat, and instead of coveting her – bosom, hair, and eyes – their gazes slide away. Only Uncle Norfolk glares at her fiercely, as if her head were not Medusa’s head."

We all know what happened to Medusa; Perseus decapitated her.

And so the courtly lover turns despot, and finally, executioner.

The Medusa image is instructive. Even after her death, the power and fascination of her stare remains. Likewise with the enigmatic Anne Boleyn. She lives on in us and through us, ever tempting writers to sift through the whirlwind of myths, legends and snippets to capture the essence that was lost in the thunderous noise of her conflicted, precarious world. A world distant, and yet strangely, painfully reminiscent of our own.

Lynn Parramore is an AlterNet contributing editor. She is cofounder of Recessionwire, founding editor of New Deal 2.0, and author of 'Reading the Sphinx: Ancient Egypt in Nineteenth-Century Literary Culture.' Follow her on Twitter @LynnParramore.