The mogul antes up another $35 million; Romney gets heckled; Greece gets bailed out; and other top Monday stories. 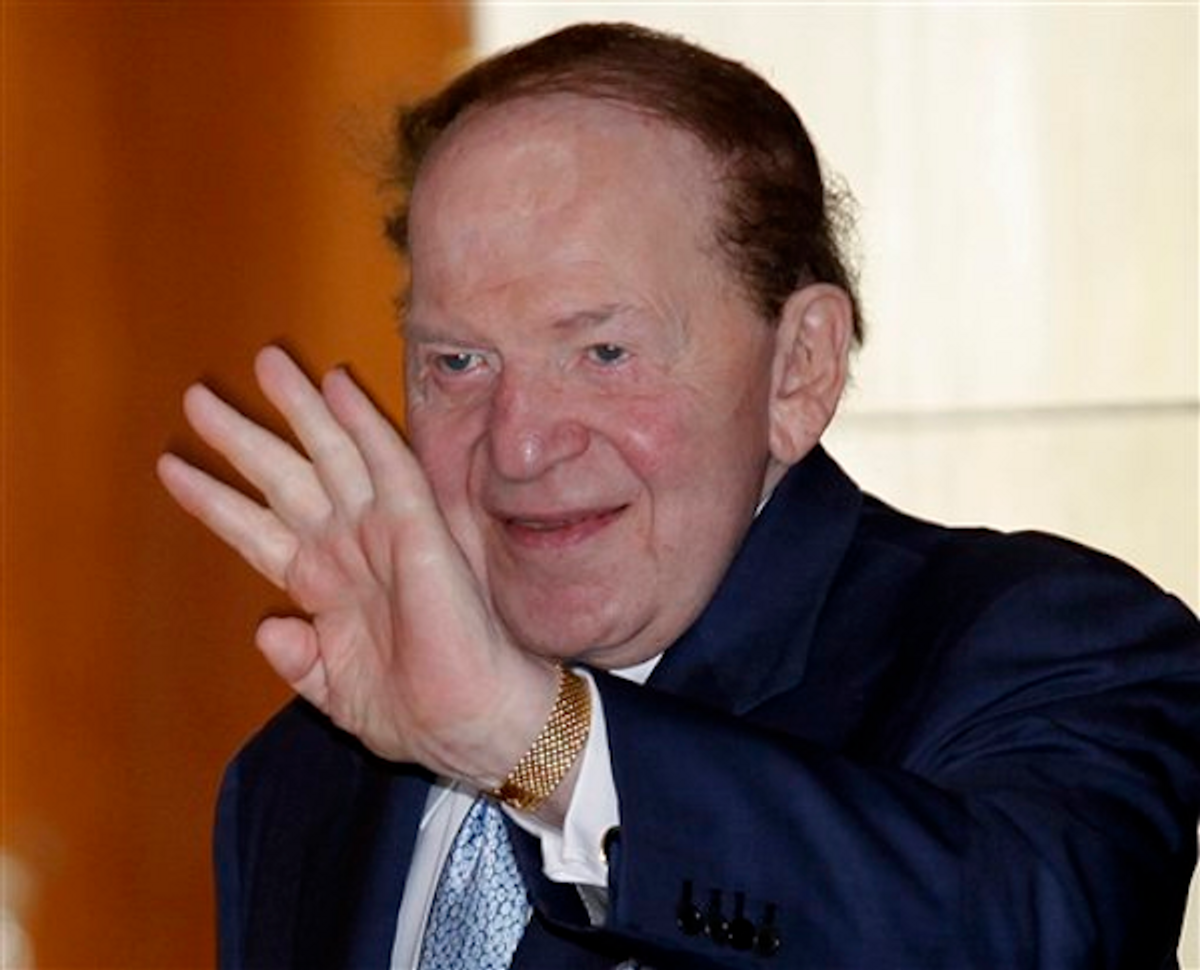 Sheldon Adelson doubles down: We knew the casino mogul had spent at least $36 million so far the election -- way more than liberal billionaire George Soros spent in 2004 -- but the Huffington Post’s Peter Stone reports that Adelson has funneled an additional $35 million to nonprofit groups that don’t have to disclose their donors, bringing his total spending so far this year to $71 million.

Citing anonymous GOP sources, Stone reports the three new groups are Crossroads GPS, the 501(c)4 group in Karl Rove’s campaign finance empire; a non-profit linked to the Koch brothers (it’s not clear which one, though likely either Americans for Prosperity or the anti-health reform Center to Protect Patient Rights); and the Young Guns Network, a group set up by House Minority Leader Eric Cantor to elect Republican House candidates.

Mitt Romney gets a taste of his own medicine: After sending volunteers to heckle Obama adviser David Axelrod, and using his campaign bus to harass the president's supporters, the presumed Republican presidential nominee ended up on the other end of a tough crowd yesterday in Ohio, where hecklers interrupted his appearance with House Speaker John Boehner. Romney staffers scrambled to respond, repositioning loudspeakers around the small group of protesters in an attempt to drown them out with Romney’s words.

Seizing an opportunity to gloat and claim the moral high ground, Axelrod Tweeted, “I strongly condemn heckling along Mitt’s route. Shouting folks down is their tactic, not ours. Let voters hear BOTH candidates & decide.”

About that “repeal and replace...": With the Supreme Court’s decision looming on the Affordable Care Act, it’s high time for Republicans to hammer out the last details of that health care reform replacement plan they’ve been working on since Obamacare passed two years ago. Small problem: It doesn’t exist. Now, even the reliably conservative Wall Street Journal editorial board is taking the GOP to task for failing to come up with a plan, despite running an entire election in 2010 around the promise:

Crisis averted (for the moment) in Greece: “Greek voters on Sunday gave a narrow victory in parliamentary elections to a party that had supported a bailout for the country’s failed economy. The vote was widely seen as a last chance for Greece to remain in the euro zone, and the results had an early rallying effect on world markets,” the New York Times reports.

Many experts feared that if anti-bailout parties took control, Greece would drop out of the European grouping, which could bring down the continent’s economy and the U.S.’s in the process.

Egyptians wonder why the bothered voting: Saturday was supposed to be a big day for democracy and Egypt’s protest movement, with the country’s first presidential election since the ouster of former dictator Hosni Mubarak. But then, as the Washington Post reports: “Egypt’s military leaders issued a constitutional decree Sunday that gave the armed forces sweeping powers and degraded the presidency to a subservient role, as the Muslim Brotherhood declared that its candidate had won the country’s presidential runoff election. The bold assertion of power by the ruling generals followed months in which they had promised to cede authority to a new civilian government by the end of June. Instead, activists and political analysts said, the generals’ move marked the start of a military dictatorship, a sharp reversal from the promise of Egypt’s popular revolt last year.”