"The Killing": So that's who murdered Rosie?

"The Killing" makes its big reveal and suggests its true path: It is really a show about small-town mediocrity 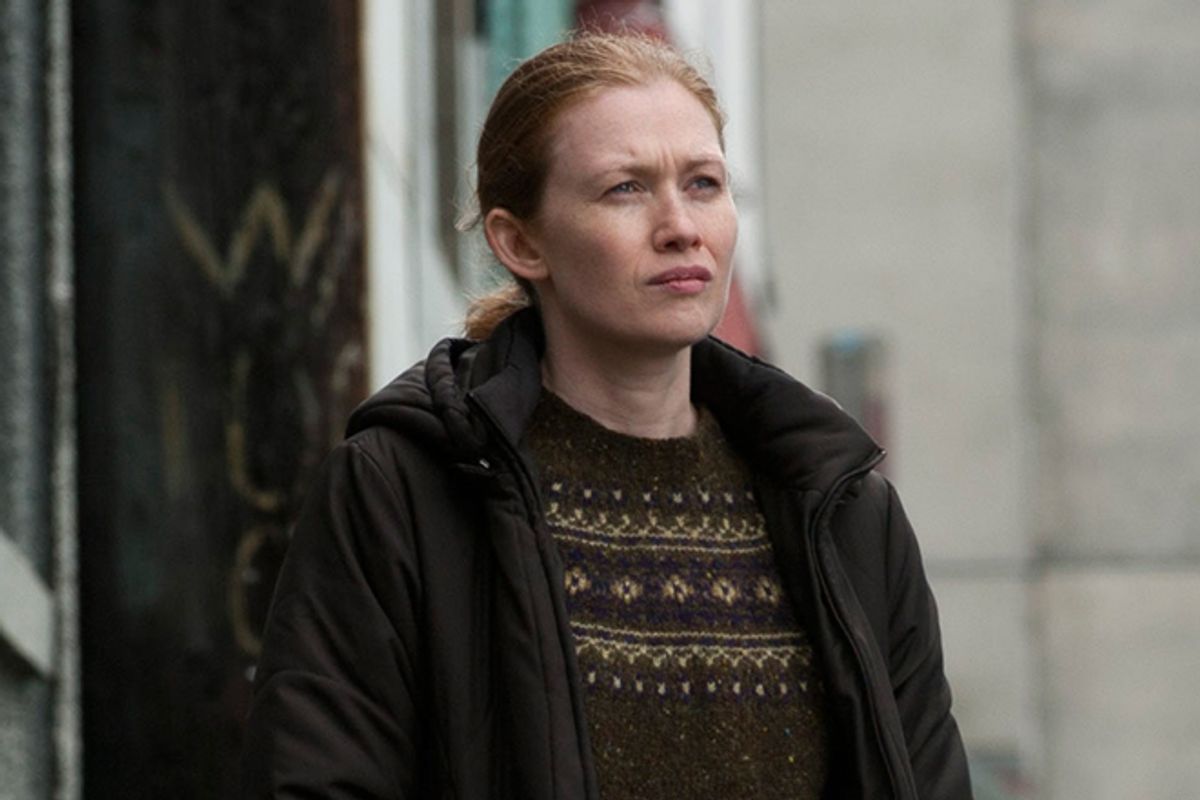 Mireille Enos in "The Killing"
--

When “The Killing” began its second season, I pledged to irrationally hate it. It was that or not watch the thing at all. After the egregious detecting, lumpy sweaters, gross chewing noises, and the non-ending of the first season, hate-watching or ignoring the whole soggy mess seemed to be the only two choices for a pleasurable viewing experience. Watching with an open mind, trying to find the competence in the incompetence, the pink salmon among the red herrings, felt too tedious. I would rather be judgmental, unhinged and as quick to hop to conclusions as detectives Linden and Holder.

And yet, as I have kept on keeping on with Season 2 of “The Killing,” which finished last night, my furious passion has faded away, replaced by a duller equanimity. Linden and Holder are not very good at their jobs, but the actors who play them — Mirelle Enos, Joel Kinnaman — sure are. The thing that was meant to happen in the first season -- wherein the audience was made to care so much about the characters that the outcome of the murder investigation was not the show’s only appeal -- kind of started to happen. Sure, I found every single one of this season’s scenes with Mitch (Rosie Larsen’s mom, who fled home to take an emotional walkabout of the seedy motels of the Pacific Northwest) to be mind-numbingly irrelevant, but watching Holder and Linden cracking jokes in a car? Any time, especially now that Linden has given up her disgusting gum-smacking habit and started smoking real cigarettes again.

But then came last night’s finale, and with it, an end to my composure. [Spoilers to come, obviously.]

To dispense with the facts, here’s who killed Rosie Larsen: Rosie’s aunt Terry. Why did Terry kill Rosie? Well, Rosie accidentally overheard a meeting between mayoral candidate Darren Richmond’s aide, Jamie; the Indian chief Nicole Jackson; and the property developer Michael Ames about their plans to sabotage the mayor’s waterfront development project. Jamie found Rosie, and her super-8 camera, right after the meeting finished. He panicked and beat her up, then stalked her through the woods for hours, before putting her in the trunk of his car. A crazed Jamie then called Ames and asked for his help. Jamie, Ames and Ames’ girlfriend — Terry! — met up beside a secluded lake, where Jamie begged Ames to take care of the girl in his trunk, telling Ames that if he didn’t help, the sabotage of the waterfront project would fall through. Ames’ plan to make a fortune and leave his wife would collapse as well. Ames refused to help Jamie, telling him that the plan was over and that he was never going to leave his wife. Terry, who overheard all of this and was desperate to run off with Ames, got into Jamie’s car and drove it into the lake, with Rosie locked in the trunk. Only later did Terry learn that it was Rosie she had killed.

So, the killer, it could have been worse. It could have been Jamie’s grandfather Ted, coming in as a last-minute suspect, some sort of Grandpa Ex Machina. It could have been some other character we barely met or cared about, like Ames or Nicole Jackson. It could have been, God forbid, Holder. Terry is a character we have spent a significant amount of time with and who has been sympathetic for much of that time, stepping in to help with Mitch’s kids while Mitch was gone (though now we know she was likely doing endless loads of Larsen laundry out of guilt). The scene in which Terry started sobbing and hugging Mitch while screeching “I didn’t know it was her” was even raw and deranged enough to be affecting.

But if the killer was fine, the finale was a microcosm of so much of what’s been frustrating about the show. First and foremost, after two seasons, I didn't really care who had killed Rosie Larsen. The killer was, as I said, fine. Fine, as with just about everything having to do with this show, was the upper limit. Second, Jamie confessed and was killed by Holder in the first 20 minutes of the show. Anyone familiar with the laws of television knows that if there are 40 minutes left and the plot seems to be wrapped up, the plot is not wrapped up. Similarly, if it appears the killer has been found in Episode 3 of a 13-episode season, the killer has not been found. “The Killing’s” timing has always been off. Third, at the end of the episode, Ames — who was present when Rosie was murdered — showed up at a meeting Mayor-elect Darren called to discuss a casino construction project. Linden and Holder, flaky cops till the end, had somehow yet to get a charge to stick on a guy who had aided and abetted a murder. Fourth, the silent, goodbye movie Rosie filmed for her family in the days before her death was supposed to be tear-jerking, but it was just a reminder that "The Killing" failed to make Rosie a real character worth caring about. She's only ever been, as Holder put it, a person in "the wrong place at the wrong time," and in the episode's final minutes, suddenly the star of a chirpy music video. At least Rosie made her video with an old-school hand-held camera. Say what I will about “The Killing,” it sure is consistent. It's a place where cops don’t know how to use email and teenagers are still shooting on 8mm.

After two seasons of ‘The Killing,” I am pretty convinced that there is a great show lurking inside of it, but that great show is not a tightly plotted, emotionally affecting crime drama. No, inside "The Killing" lurks a great show about mediocrity, about dogged cops who mean well but are bad at their jobs, adoring parents who love their children but damage them anyway, well-meaning politicians who intend to stay clean but make too many compromises. It’s not a searing indictment of corruption or malfeasance. It's not a show about flashy, cynical or malignant characters. It's a methodical drama about being middling, about those people whose very best is not great.

“The Killing” is more than halfway to being this show. All it has to do is own the mediocrity splashed through it, to stop pretending that Linden and Holder are great detectives, that any of the parents on the show are halfway decent, or that Richmond’s mayoral victory was anything but luck. All the pieces are already in place. Linden and Holder are already the kind of cops who got a guy paralyzed because they didn’t bother to really check his alibi before accusing him of murder. Linden is already a bad mother of the leave-your-child-with-a-103-degree-fever-alone-in-a-hotel-room variety, but Mitch also abandoned her boys for weeks when they needed her most. Stan, who faithfully stuck around, is not above smacking his kids in the face and telling them he hates them. The show’s most solid parental figure, Terry, turns out to have killed the sister of the children she was parenting. And Richmond is already the sort of politician who unknowingly has a major aide pledging corruptibility on his behalf, and who was incapable of turning getting shot into a bump in the polls.

During last night’s episode, Holder and Linden's boss told them they had both done "good work." This compliment came after they had gotten Jamie, but before they had figured out Terry was the real killer, but I take his point anyway. At least they had reached a conclusion. "Good" might be pushing it a bit.