Time for a typewriter renaissance? 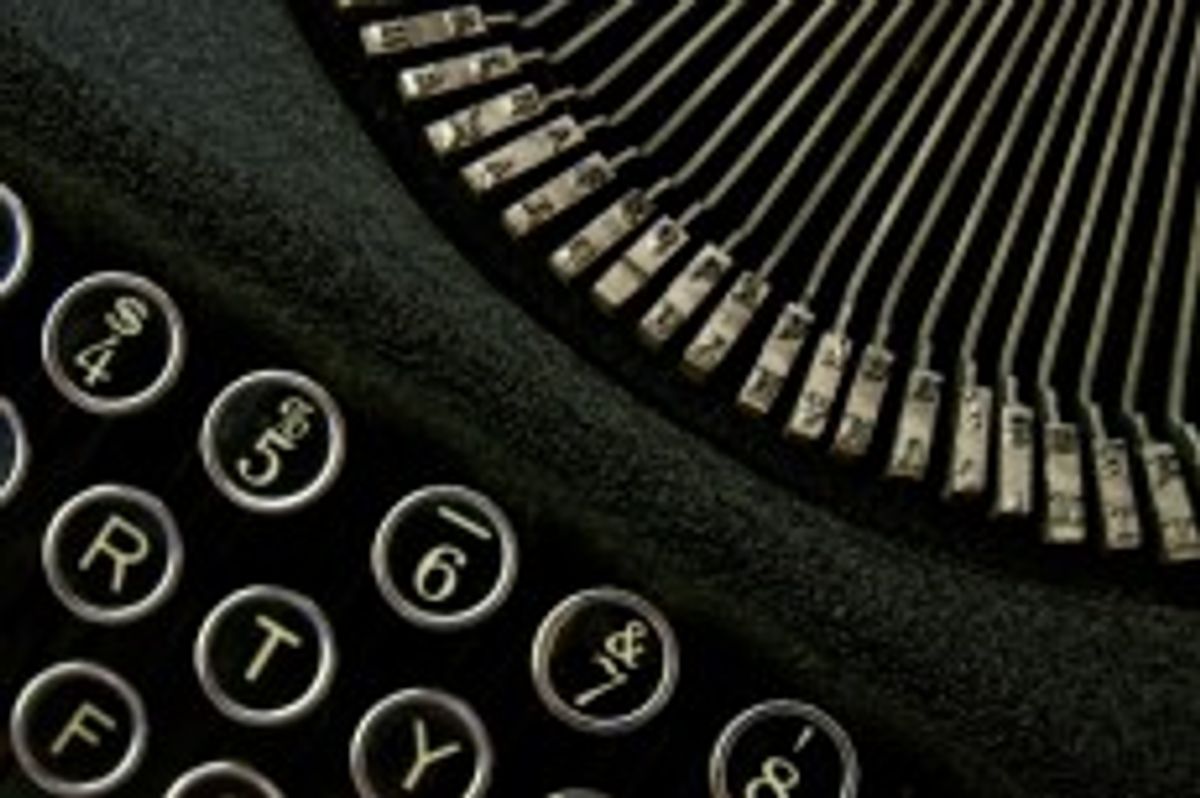 It was 4 p.m. on a Thursday, two hours until the end of Jesse Banuelos’ workday. He was standing behind the front counter of Berkeley Typewriter, his trademark green apron tied around his waist. A dozen broken typewriters — some electric, but most of them manual – were stacked in a corner on the brown linoleum floor.

Forty years ago, the shop was at the top of its game. But during the '90s, as computers became more affordable, fewer customers bought typewriters or needed them repaired. Many typewriter stores went out of business. Berkeley Typewriter laid off some staff and managed to remain open by offering services like printer, photocopier and fax repair. Banuelos is the store’s only remaining technician who knows how to fix typewriters. He never learned how to type on a computer and for a time he worried that the typewriter industry would soon disappear.

He was wrong. In the last few years, both typewriter sales and repairs have increased at the store. Berkeley Typewriter experienced an increase in overall sales in 2011, moving about two or three a week. It’s not like the olden days, Banuelos said, but it’s enough.

Most of the typewriters that he sells or takes in are manual machines made between the early 1900s and the 1960s. The dozen or so brands displayed in Banuelos’ front window read like a row of multicolored tombstones: Royal, Remington, Underwood, Smith-Corona, Olivetti, Corona, Adler, Oliver.

Banuelos, who started working at the store 44 years ago, when he was in high school, isn’t surprised by the recent bump in interest. Typewriters are beautiful objects, he said. People want to buy them.

“We have customers all the time,” he said. “[It’s] somebody’s birthday, somebody’s anniversary, or somebody in love with a young boyfriend.” To want a typewriter, you have to be a bit of a romantic, he added, “and besides, they’re cool.” They can also be a relief from computers and the distractions of the Internet. “They want a machine that has to be old, unique and nice,” Banuelos said. “Why? Because of this. The click, click, click. They want that.”

Some customers bought machines years ago and still come in for repairs. Others used one when they were young and are nostalgic. But most of the customers are typewriter newbies, many of them in their 20s. Typewriters are never going to be a home or office mainstay again, but they’ve found new fans among hipsters who are repurposing them for the digital age.

“Let me tell you something,” Banuelos said. “Young kids today, they want one of these machines.” And he has the dwindling inventory to prove it.

Sixty miles away in a second-story bedroom filled with stuffed animals and figurines, was 14-year-old Max Swisher. The room belonged to his older sister but she’s away at college, and his room was messy, unbearably messy. Multicolored wires snaked around pens, yarn and various tools. Five computers, a few monitors and a television set all vied for space on his “L”-shaped desk. You couldn’t see the carpet. To reach his desk or his bed or his closet, Max had to wade through a sea of stuff. And if it weren’t for his sister’s absence, he’d have nowhere to store his brown IBM Selectric II.

Max has two typewriters: a blue manual Brother from the '60s and the IBM. The former is small and lightweight, the latter is about 2 feet wide and weighs 50 pounds, easy.

When Max first got the typewriters, he used them for writing letters or, as he put it, “Anything I would eventually do on the computer, I would do on the typewriter first because the typewriter is just more fun.” For laughs, he once took the huge IBM to a Starbucks, where he wrote a fake book report while his two friends used their cellphone cameras to capture the confused, surprised, annoyed and delighted reactions of other patrons. “They’re taking pictures and giving me odd looks,” Max said. “It was really funny.”

Before he graduated from middle school, Max already had two websites, a Twitter account and an ongoing paid internship – started when he was 9 – with Cooliris, a Palo Alto app developer. And yet, Max has a penchant for old machines. He owns a collection of film cameras, including a mid-'90s Polaroid. “Old technology is the new technology of yesterday,” he said, before congratulating himself for making up that statement on the spot.

Max likes to scan the documents he writes on his typewriter and post them to his blog. He’s not the only one who’s discovered this quirky pastime. Aficionados call it typecasting and they’ve named their Internet subculture “the typosphere.” According to a blog of the same name, it is “a term for bloggers who collect, use, and otherwise obsess over typewriters and other ‘obsolete’ technologies.” The site lists more than 80 typecasting sites, three typewriter-themed Yahoo! groups (with a collective membership of nearly 4,000 people) and one Facebook group.

Sporting clever names like “I dream lo-tech,” “Type Clack,” “Iron and Ribbon” and “Typesmitten,” most typecasting forums are typical fan sites that allow people to post comments on favorite models and recent acquisitions. Other sites, like 17-year-old Matt Cidoni’s Adventures in Typewriterdom, are more like personal blogs with posts about getting his driver’s license, senior prom and break-dancing.

Matt became interested in typewriters when he was in the seventh grade. “I thought it was fascinating,” he said in a phone interview. “I love how it’s right in front of you the minute you hit a key. You don’t have to wait for it to print, nothing crashes, and you don’t have to worry about power outages.”

Over the years, Matt has helped friends shop for typewriters, often buying them through Craigslist or eBay. Many of them are attracted to the machines because of their association with the writers they idolize, he said.

Twitter and Facebook have also helped rekindle interest in the typewriter. Bob Skrezyna, a self-proclaimed typospherian and the founder of a Facebook group called the Typewriter Collectors Alliance, credits Twitter for introducing him to other typewriter enthusiasts. “I thought I was alone and my wife thought I was crazy,” he said. “And as it turns out, there’s hundreds, if not thousands of us.”

By using the Internet to reach a broader audience, young typewriter enthusiasts have advanced their interest in novel ways. They hold “type-ins,” for example, to type, talk and swap machines. Since the first one, held in Philadelphia in 2010, type-ins have taken place in other U.S. cities and in Switzerland. Although people of all ages attend type-ins, their main draw, Matt said, is so that people can experience a time when laptops did not exist.

Indeed, signs of typewriter fetishism are popping up around the hipsterverse. In 2010 a group of 20-year-olds in Boston discovered that they could make music from the machines and formed the Boston Typewriter Orchestra. Dozens of sellers on Etsy specialize in handmade typewritten invitations to weddings and events. Twenty-nine-year-old Zach Houston, who was recently profiled by NPR, makes money by selling personalized poems typed on the spot for customers.

Jewelers and do-it-yourself crafters use the machines’ glass keys in necklaces, earrings, bracelets, rings and even cuff links, upsetting mavens who prefer their machines intact. Other owners don’t use their typewriters as anything beyond props or decorations. A recent article in the New York Times about “over-propping” one’s house warned that “it’s inevitable that once-fresh decorating ideas [like the typewriter] will become clichés.”

Twenty-seven-year-old Jack Zylkin, an inventor from Philadelphia, saw too many unused typewriters and brought them into the 21st century. After finding a manual typewriter on the side of the road, he turned it into a keyboard for computers and iPads.

And for those who want to use a typewriter the old-fashioned way, there’s a device for that, too — albeit with a modern twist. Two years ago, working in the shared workspace at Philadelphia’s Hive76, 27-year-old Jack Zylkin turned a manual typewriter that he found on the side of the road into a keyboard for computers and iPads. The revamped typewriters still function as originally intended (if you put paper and ribbon in them), but also transmit the text to the screen via a USB cord. To date, he has sold over 400 do-it-yourself kits and more than 100 completed devices through his Etsy shop, USB Typewriter.

“If they were still making typewriters today,” Zylkin said, “they would probably just add these extra amenities that would make them much easier to use.” Instead, the task of modernizing the machines falls on Zylkin, one typewriter at a time.

An electronic sensor chimed when the front door to Berkeley Typewriter opened. Jesse Banuelos had a customer. “Hello,” a trim stranger in a brown suit said as he walked up to the counter. “This is the famous Berkeley typewriter place.”

He handed Banuelos a used cassette ribbon and asked if there were any in the store. It had been a few years, but he wanted to start using his old electric Brother again. “I went to law school with this,” he said. “I passed the bar with it. That’s why I’ll never part with it. And this baby is cool, it’s electric.”

Banuelos didn’t have the ribbon in stock and the man was disappointed. He had driven two hours and there wasn’t a typewriter store closer to his home. As he walked to the door he said he’d be back. He wants to buy another typewriter — for his 8-year-old daughter.

Jess Schiewe is a modern-day Luddite, who doesn't support Facebook, Twitter, Google+, iPads, digital books and the like. She has an iPhone but it's an early edition, has a shattered screen, and was a hand-me-down from her mom. She is grateful for email, text messaging, and the World Wide Web, which she knows has made her life, and her job, a whole lot easier. Check her out at www.jessieschiewe.com.