A Scottish redhead fights the patriarchy (and her mom) in "Brave," a gorgeous but jumbled girl-centric adventure 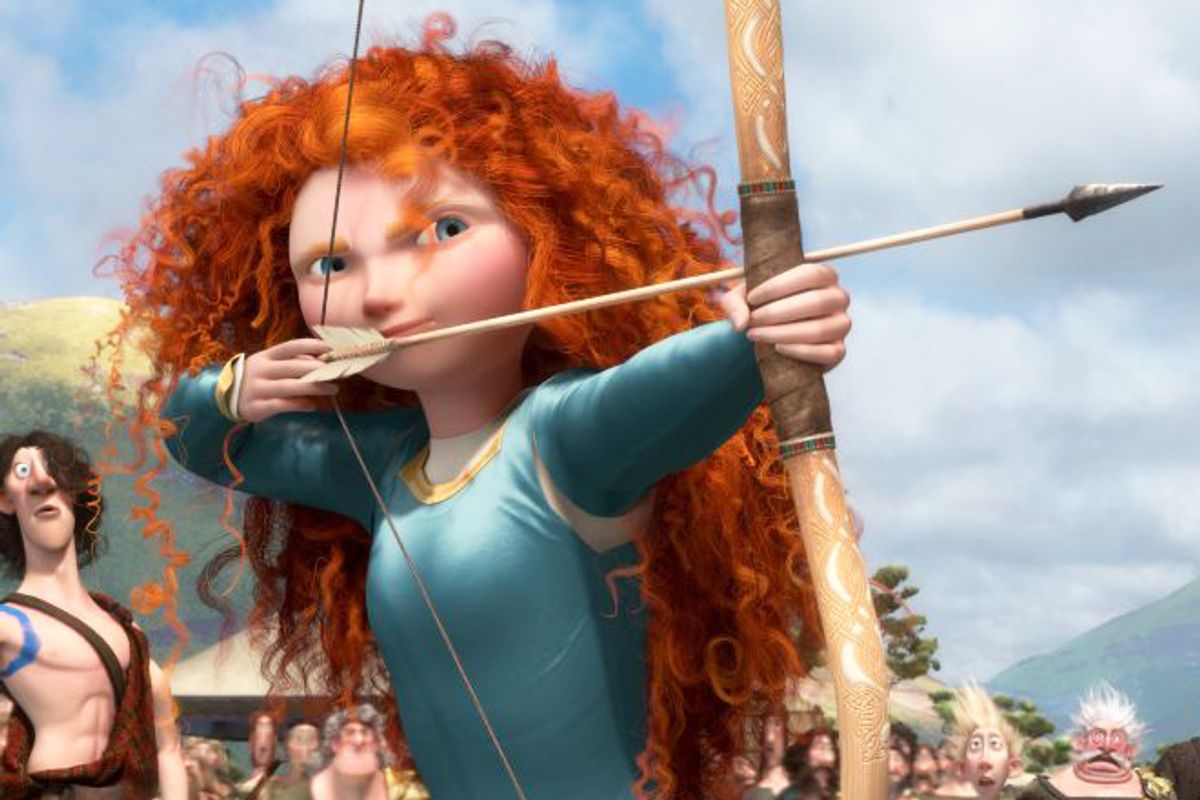 Merida, the fiery Scottish princess voiced by Kelly Macdonald in Pixar's new animated adventure "Brave," belongs to the same category as Dora the Explorer, Nickelodeon's bicultural cartoon heroine. If that doesn't quite sound like fulsome praise, you're on the right track. No, listen -- in all seriousness, there are reasons to be grateful for both of them. Both "Brave" and the Dora franchise represent honorable -- and desperately needed -- attempts to craft alternative role models, and alternative entertainment options, for girls who yearn to break out of the pink-and-peach prison of princess culture. As the father of a ferocious and imaginative 8-year-old female human who has never once worn a cardboard tiara, I'm glad they exist. Is it OK to wish that they were actually, y'know, good, and not just good for us?

Let's get past the invidious comparison right now: There is no similarity between the lovingly detailed picture-book animation of "Brave" and the insipid primary colors of the cheaply produced "Dora" cartoons. Capturing the haunted greens, golds, blues and grays of a Scottish castle and the deep forest around it -- the setting is unspecific but vaguely medieval -- "Brave" is another pictorial triumph for Pixar. Even there, though, I have reservations: I pretty much hate the squeaky-looking kewpie-doll creatures that Pixar's animators have always conjured up to represent human figures. There's a reason that the studio's best films have focused on animals or inanimate objects. And I emphatically recommend not spending the extra bucks for 3-D glasses. Even watching "Brave" at a Manhattan theater with supposed state-of-the-art projection equipment, the 3-D image looked muddy and dim, and the extra depth added nothing significant.

"Brave" feels like a departure from Pixar tradition in many ways, and a picture whose success or failure at the box office will likely determine the studio's future direction. Most obviously, it's the first Pixar film with a female protagonist, and the first one aimed at a primary audience of young girls. As I just mentioned, the studio has largely avoided human characters (the exceptions being "Up" and maybe "The Incredibles"), and has never before made what you might call a period costume drama. This is a coming-of-age adventure for children and their parents, and more specifically for girls and their mothers, with almost none of the usual adult-directed comedy or ironic context. "Brave" also signals a changing of the guard within Pixar; while veteran directors Pete Docter ("Up" and "Monsters, Inc.") and Andrew Stanton ("WALL-E" and "Finding Nemo") serve as executive producers, along with studio head John Lasseter, the directing team of Mark Andrews, Brenda Chapman and Steve Purcell is all new. (Chapman is a veteran animator who co-directed "The Prince of Egypt" for DreamWorks in 1998. The other two are Pixar insiders who've risen through the ranks.)

In fact -- and I know exactly how this is going to sound -- "Brave" feels a lot more like a Disney film than a Pixar film. (Technically, of course, it's both, and I guess the point is that the distinction is starting to disappear.) Go into it with those expectations, and you won't be disappointed. Merida's quest to define her own destiny is an agreeable, if wildly implausible, blend of European fairy tale, Celtic legend and contemporary mores about feminism and individuality, with no serious villainy and a few mild action sequences. (There is a ravening, one-eyed bear who may well scare the delights out of smaller children, but his appearances are brief.) Certainly the filmmakers deserve credit for crafting a big-screen adventure focused on the psychological and emotional dynamics of the mother-daughter relationship, which is generally neglected or distorted in children's stories, which have specialized for so long in missing and/or evil maternal figures.

There is no question in "Brave" that Merida and her proper, beautiful, supremely queenlike mother, Elinor (voiced by Emma Thompson), love each other. But after the fashion of moms and daughters since time immemorial, they drive each other nuts. Elinor strives to teach Merida dignity and decorum, in preparation for the day when she must marry a first-born prince from an allied clan to preserve peace in the realm. Merida is (of course) a wild tomboy, who longs to learn to ride and fight and hunt like her brawly, boozy, supremely undignified dad, Fergus (Scottish comedian Billy Connolly). When her parents host an archery tournament devised to select the manliest suitor, Merida enters herself, with unexpected results (that is, unexpected if you've never seen a movie before).

But when Merida follows a trail of will-o'-the-wisps -- little blue globs of luminous mist, both mysterious and silly -- to a witch's cottage deep in the forest, and accepts a black-magic solution to her dilemma, "Brave" enters some interesting symbolic territory. I shouldn't say too much about Elinor's transformation, or the ways it threatens to permanently sever her relationship with Merida, but the screenwriters (Andrews, Chapman, Purcell and Irene Mecchi) are aware of the fact that in the Celtic and Northern European tradition, every magical transaction comes with hidden risks and unintended consequences. Merida has to learn one of the hardest lessons that any child, male or female, must absorb: Our seemingly impervious and all-powerful parents are human, too, and we can hurt them grievously through our selfishness and thoughtlessness.

There's a moderate amount of ribald comic action in "Brave," involving (among other things) a couple of bears and Merida's mischievous triplet little brothers, who are already the subjects of a major merchandising push. (I shouldn't mention that at one point they get turned into adorable bear cubs, right? That'd be a spoiler.) Add that to the marvelously realized setting in the mythical-medieval Scottish highlands and you get a charming family summer entertainment. Still, it's an entertainment whose good intentions can't conceal the fact that its story is thin and loopy, its characters (especially Elinor) woefully undercooked and its happy ending slapdash even by Disney standards. This is like the "Inglourious Basterds" of feminism; all it took to bring down patriarchy in Scotland was one spunky redhead standing up to say no! Moms and girls everywhere deserve this movie, absolutely, and I hope they have a great time. But they also deserve much more, and much better.