From denying abortion to military rape victims, to aiming for total bans in the states, the GOP's assault continues 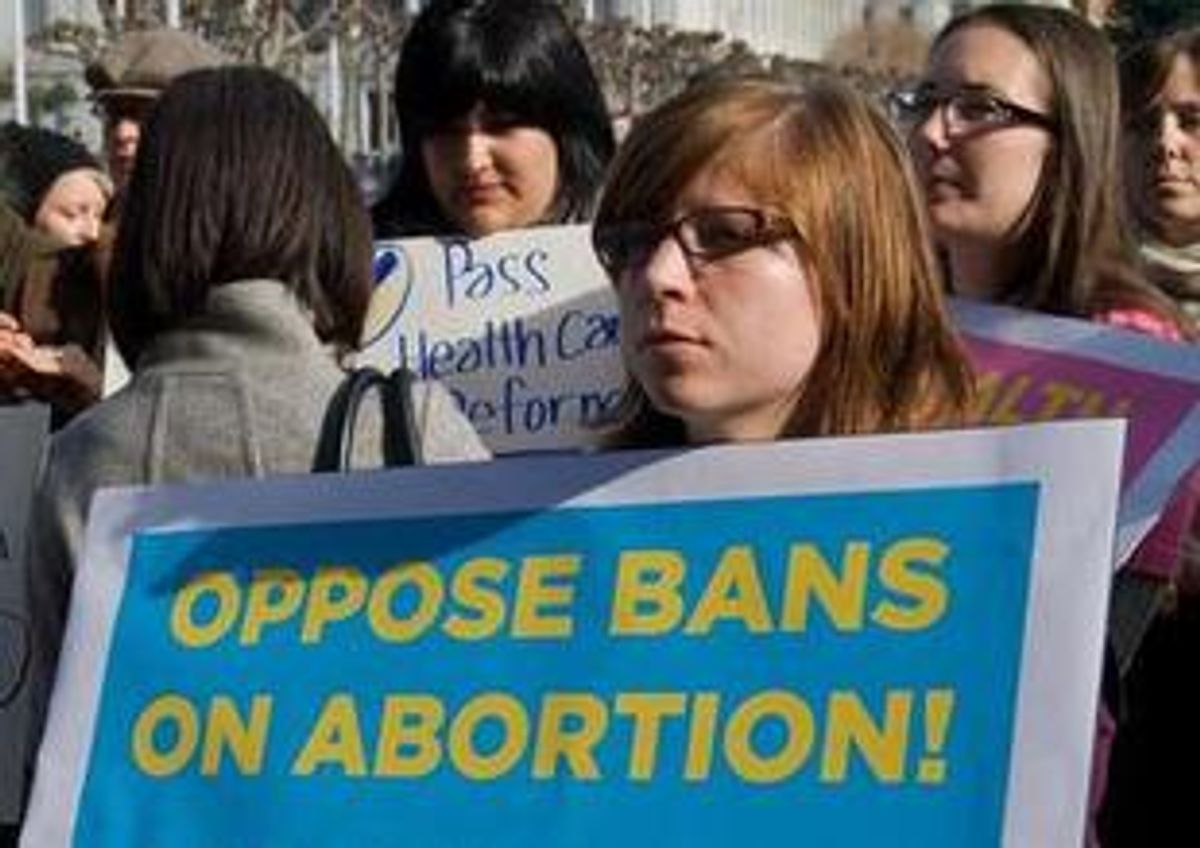 By now, the story of Representative Lisa Brown,  almost certainly banned from speaking due to her uttering the word "vagina" during the debate of an anti-choice bill on the House Floor in Michigan, is spreading fast. The humor used by pro-choice politicians in Michigan is understandable and has called necessary attention to their policy debate. But it shouldn't hide the fact: what's behind the high-profile skirmish is one of the worst anti-choice bills any state has seen, a so-called omnibus bill that would decimate reproductive healthcare options in the state.

The series of state-level and national legislative assaults on reproductive rights that's come to be known as the "war on women" is still going strong, despite sizeable public backlash. The GOP's approach--throw every kind of abortion ban or family planning cut to the wall and see what sticks -- means that even if the most heinous bans and provisions don't go through thanks to outctry, something will.

Here are a few examples of what the GOP has been up to since the last time we checked in.

During debate over an omnibus bill that would curtail reproductive rights, Rep. Lisa Brown concluded her speech with the phrase that would soon ricochet around the news cycle: "And Finally Mr. Speaker, I'm flattered that you're all so interested in my vagina, but no means no." As a result, she was forbidden from speaking about the bill the next day.

But the argument she was making is not a laughing matter. The package of bills that prompted "vaginagate" is a doozy, including a so-called "super bill," a bundle of restrictions rolled together. The worst of those seeks to eliminate all abortions in the state after 20 weeks, with no exceptions for rape, incest or the health of the mother.

But while that is the most controversial proposal--it would essentially force women who have found out their fetus isn't viable to carry it to term anyway--the rest of it has already passed, and it puts the squeeze on abortion rights from all angles. It bans the all but nonexistent practice of "sex-selective" abortions; eliminates "tele-med" abortion, in which a doctor supervises the procedure remotely; and introduces "coercion screenings" to add a hurdle to women seeking the procedure. It also introduces a passel of noxious TRAP laws (Target Regulation of Abortion Providers) which put requirements on things like hallway width and require clinics to jump through various hoops to stay open.

In the fall, the state senate will vote on many of the regulations that passed the House. The 20-week ban is shortly to follow on the docket.

As for vaginagate, Jessica Valenti gets to the crux:

I wished this latest GOP gaffe surprised me, but Republicans feeling squirmy about women’s “down-theres” while desperately trying to keep said “hoo hoos” in check is pretty standard these days. We live in a country where it’s fine to legislate vaginas but saying the actual word is forbidden.

Women in the military are already vulnerable to rape, but even more dehumanizing is the fact that they are the only federal employees who are not able to access abortion in the cases of rape or incest. If a woman in the armed services is raped and becomes pregnant (as happens in a few hundred cases a year), she has to pay for her abortion herself and often if she's abroad, travel off-base.

The Shaheen amendment, an addendum to the NDAA, would fill this gap and extend abortion coverage to military women who are victims of rape or incest. Stand Up for Service Women (StandWithServicewomen.org), a coalition that's advocating for the amendment, explains why it's necessary.

This policy is unfair and unjust given the sacrifices of our military women, wives and daughters. Our government provides civilian women, like federal employees, with insurance coverage for abortion in the case of rape and incest and it should provide servicewomen and dependents with the same care. It is a basic matter of fairness.

It's so basic that it's even supported by Republican senators like Susan Collins and John McCain. But its prospects in the GOP- and Tea Party-controlled House are grim. The Army Times reported an expert saying the bill has "little chance" of making it through.

In Mississippi, where the sole abortion clinic is under threat thanks to GOP legislators, we could see the first state where there are zero providers. As that clinic's legal battle continues,Robin Marty notes that Kansas is doing its best to catch up:

Kansas's new TRAP law nearly closed every clinic in the state. Their "conscience" bill allows pharmacists to refuse both to fill prescriptions for contraceptive methods, but also to refuse to refer a customer needing a prescription to another pharmacist. And one law proposing to take "no taxpayer funding for abortion" to ridiculous extremes nearly closed the basic OB-GYN training program of the state university, and would have cost the school its medical accreditation.

She asks if Kansas is on its way to being a state without any abortion, and says that if the slate of 2013 legislation comes through, it might.

​The Guttmacher Institute did a survey in May of abortion restrictions enacted up to this point in the year, and already found quite a few. The highlights which Guttmacher sent out in its press release includes the multiple new restrictions in Kansas as well as a few more:

It's clear that war on reproductive freedom has fronts in multiple states as well as in the national debate over issues like abortion for women in the military.

If opponents of reproductive rights have so many tactics and are so unyielding, defenders have to meet them at every one of those fronts.

Sarah Seltzer is an associate editor at AlterNet and a freelance writer based in New York City. Her work has been published at the Nation, the Christian Science Monitor, Jezebel and the Washington Post. Follow her on Twitter at @fellowette and find her work atsarahmseltzer.com.