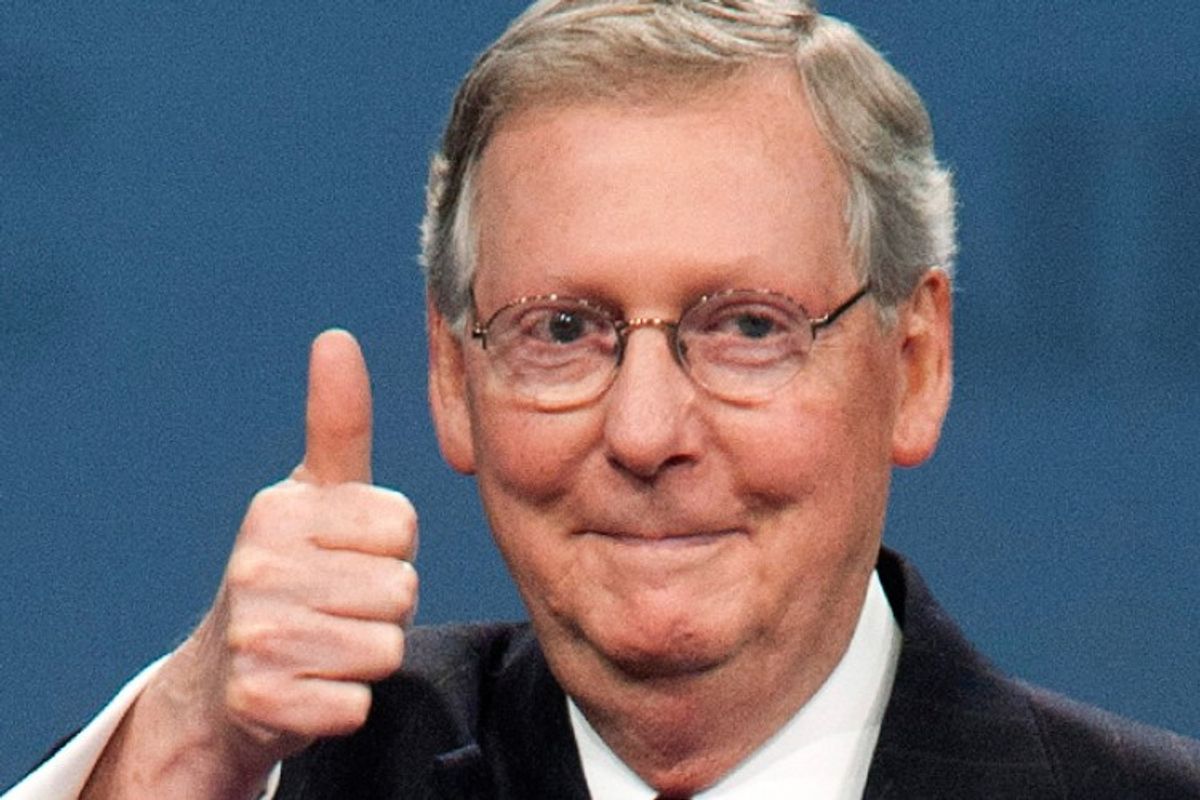 If you use YouTube today, there’s a decent chance you’ll be be forced to watch a new Web ad  produced by the American Future Fund thanking Senate Republican Leader Mitch McConnell for “defending free speech." Free speech, as McConnell and the ad define it, is the right of secretive political groups like American Future Fund to spend unlimited amounts of money to influence elections by running ads like this one without telling anyone where the money came from.

Why they're thanking McConnell is clear. He's been a tireless advocate of secret money in politics, and just yesterday signed on to a letter with 10 other top Republican senators demanding the IRS keep dark money dark and expressing concern the tax agency wanted to see the names of some donors to 501(c)4 organizations. Unlike super PACs, these tax-exempt groups, like American Future Fund, have to disclose hardly anything to the public. But they’re technically charitable organizations, so their “primary purpose” is supposed to be non-political. In practice, this is often not true, as it’s difficult to see groups like AFF or Crossroads GPS doing anything other than politics, let alone a minority of the time. But there’s no clear definition of what this means; some legal scholars say these groups should have to spend less than 50 percent of their money on political advocacy, a test most political 501(c)4's would probably fail. This ambiguity led Senate Democrats to ask the IRS in March to institute a “bright line test” to ensure that these nominal social welfare organizations devote less than half their activities to politics and to prevent donors from deducting  political contributions from their taxes.

A week later, a dozen Republican senators sent a letter to the IRS defending secret money and expressing concern that the IRS was giving unfair scrutiny to applications for new Tea Party-affiliated 501(c)4 groups. “It is critical that the public have confidence that federal tax compliance efforts are pursued in a fair, even-handed, and transparent manner -- without regard to politics of any kind,” they wrote. The signatories included some of the party’s top brass: McConnnell, No. 2 leader Jon Kyl, of Arizona, and Lamar Alexander, of Tennessee, who was the No. 3 leader until January. A spokesperson for the Republicans on the Senate Finance Committee wouldn’t specify which Tea Party groups the senators felt were threatened, but told Salon, “We heard concerns from a variety of groups in many states.”

The IRS responded by providing “assurances” that its actions were not “for political gain,” but the senators are not satisfied and are now demanding even more with their letter yesterday. In it, they stake out clear opposition to disclosure: “Unfortunately, the public release of private donor information exposes citizens to possible harassment and intimidation by those who oppose the goals of the charitable organization,” they wrote.

This is the classic argument conservatives use against disclosure, but it seems the senators may be interested in harassing IRS employees. In the letter, they demand to know, “Which IRS employees and officials were involved in the drafting of the questions requesting donor names? b)  Which IRS officials provided authority and approval for the questions requesting donor names?"

The letter underscores why doing anything to rein in outside money in politics will be so difficult: Virtually the entire Republican Senate leadership not only believes secret money is fair and proper, but is willing to agitate and lobby to keep it secret. And McConnell -- who sued the FEC in a landmark campaign finance case that went to the Supreme Court -- has signaled lately that this is a top issue for him. He gave a major speech at the conservative American Enterprise Institute last week on the issue and a series of interviews warning that disclosure is just a product of the left’s “militant intolerance for dissent.”

But one person who should maybe know better is Sen. Orrin Hatch, the main signatory of yesterday’s letter, who is facing a tough primary battle in Utah, thanks, in part, to a flood of outside money coming into the state to back his Tea Party-affiliated opponent. Some of these groups are the same kind of groups Hatch is now defending.